Pope to install catechists, lectors at Word of God celebration 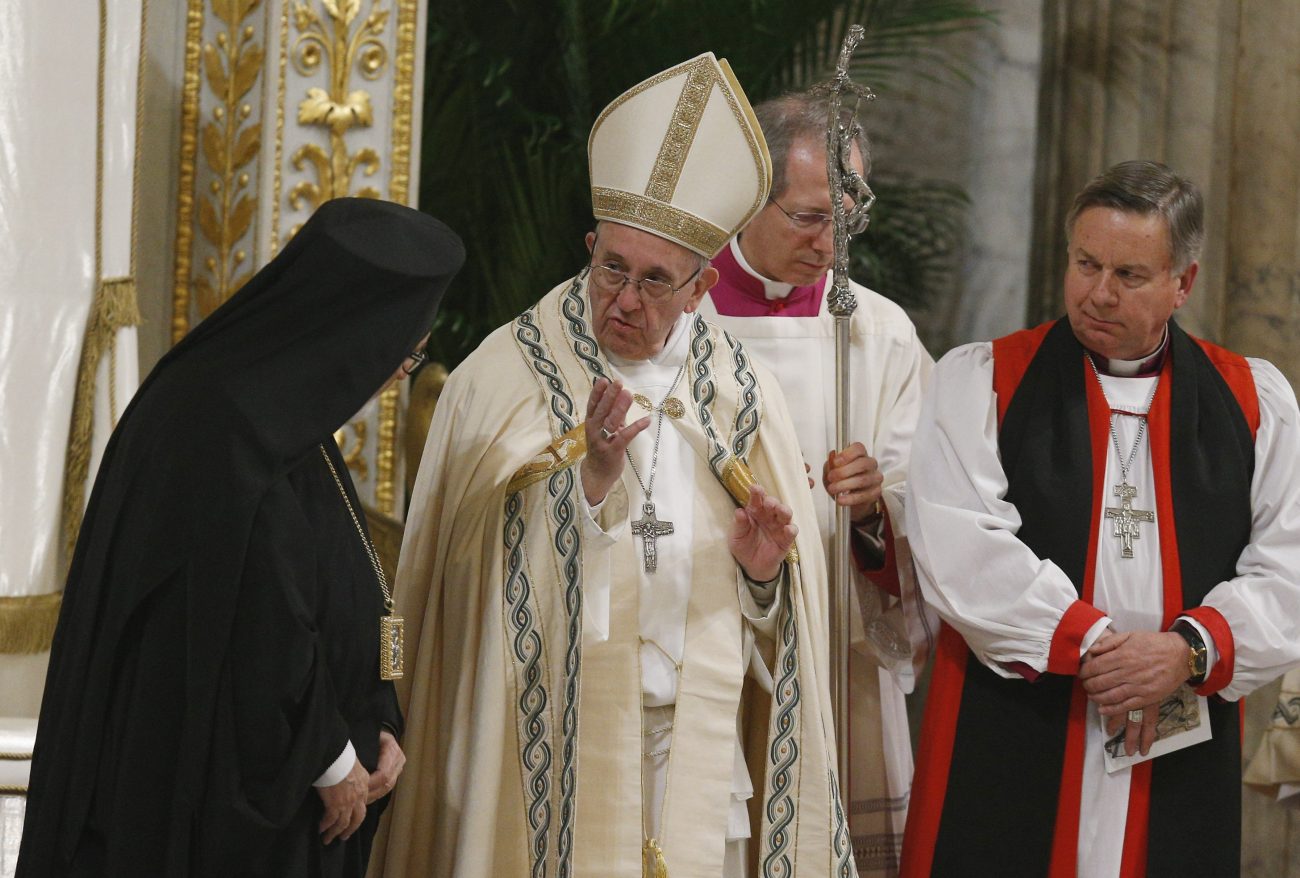 Pope Francis gestures as he stands with Orthodox Metropolitan Gennadios of Italy and Malta and Anglican Archbishop David Moxon, the archbishop of Canterbury's representative to the Vatican, during an ecumenical prayer service at the Basilica of St. Paul Outside the Walls in Rome in this Jan. 25, 2017, file photo. The pope will celebrate the annual ecumenical prayer service Jan. 25 and travel to Florence Feb. 27, among other events on his calendar for January and February. (CNS photo/Paul Haring)

VATICAN CITY (CNS) — At his celebration of Mass for the Sunday of the Word of God Jan. 23, Pope Francis will formally install new catechists and lectors — ministries open to women.

The Pontifical Council for Promoting New Evangelization, which coordinates the annual celebration, said the Mass celebrated by Pope Francis in St. Peter’s Basilica will include “the conferral of the ministries of lector and catechist.”

Pope Francis formally instituted the ministry of catechist in May 2021. It followed his decision in January to open the ministries of lector and acolyte to women. Although in most dioceses women already served as readers and altar servers at Mass, they were not formally instituted in those services on a stable basis.

Pope Francis often has spoken of the importance of selecting, training and supporting catechists, who are called to lead people to a deeper relationship with Jesus, prepare them to receive the sacraments and educate them in the teachings of the church.

The Sunday of the Word of God, instituted by Pope Francis in 2019, is meant to encourage among all Catholics interest in knowing the sacred Scriptures and their central role in the life of the church and the Christian faith. The theme for the 2022 celebration is “Blessed are those who hear the word of God,” a verse which comes from the Gospel of St. Luke.

The pope is also scheduled to celebrate a prayer service Jan. 25 at Rome’s Basilica of St. Paul Outside the Walls for the conclusion of the Week of Prayer for Christian Unity, according to the Vatican, which released a schedule of papal liturgies for January and February.

According to the schedule, published Jan. 10, he will celebrate the Feb. 2 feast of the Presentation of the Lord — which also marks the Vatican celebration of the World Day for Consecrated Life — with a Mass with consecrated men and women in St. Peter’s Basilica in the evening.

He will also celebrate Mass in the Basilica of Santa Croce in Florence Feb. 27 during his one-day visit there to speak at a meeting of bishops and mayors of the Mediterranean region. That visit also is to include an encounter with refugee families, according to the Italian bishops’ conference.

PREVIOUS: Pope appeals for peace in Kazakhstan; reflects on prayer

NEXT: Pope calls for ‘reality check’ against misinformation about vaccines