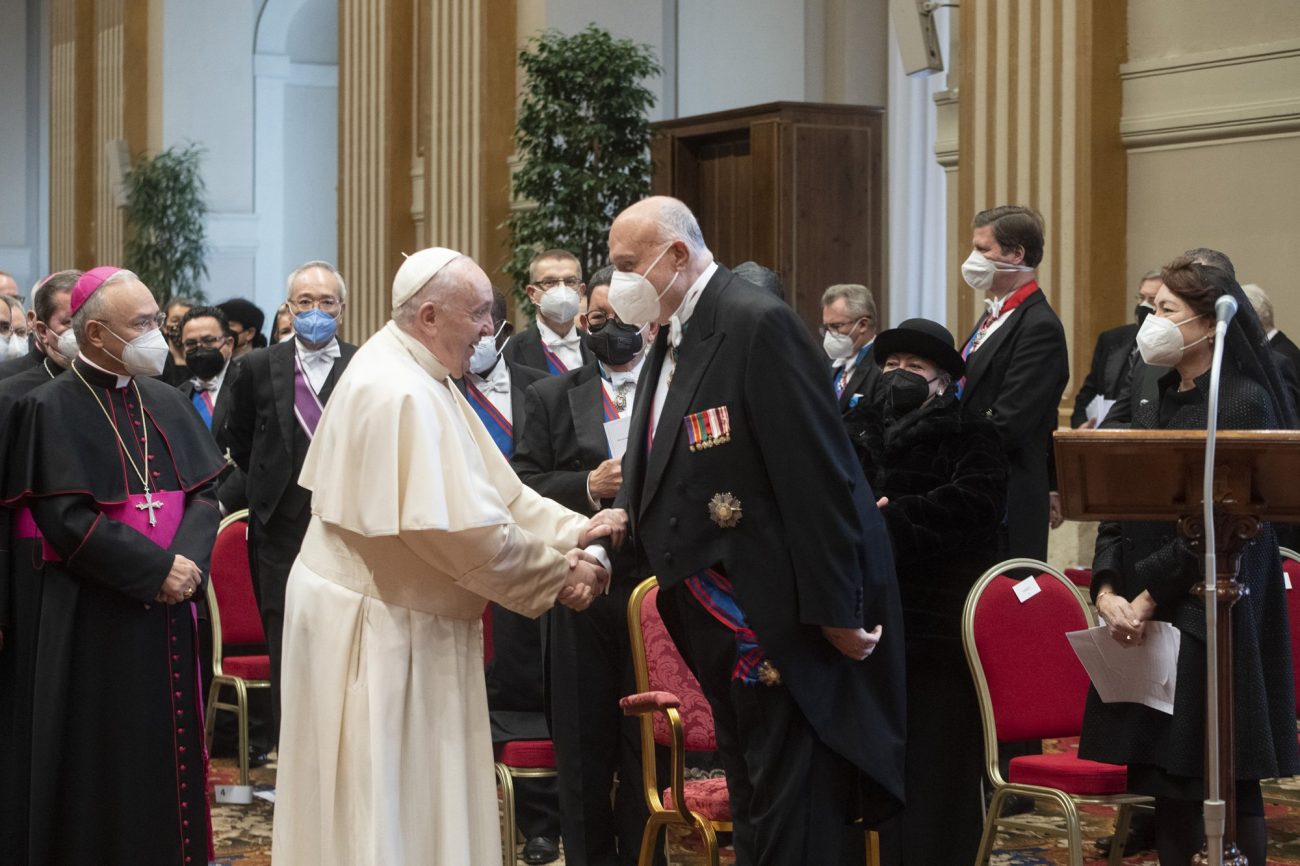 Pope Francis greets George Poulides, the ambassador of Cyprus to the Holy See and dean of the Vatican diplomatic corps, as he arrives for an annual meeting with diplomats accredited to the Holy See, at the Vatican Jan. 10, 2022. In his address, the pope called for an urgent reality check against misinformation about COVID-19 vaccines. (CNS photo/Vatican Media)

VATICAN CITY (CNS) — The COVID-19 pandemic calls for an urgent reality check against baseless information and for increased efforts so everyone has access to vaccines, medicines and diagnostic tools, Pope Francis told diplomats from around the world.

He urged individuals, governments and the international community to recognize the effectiveness and importance of immunizing as many people as possible as part of fighting the pandemic, which he called a “grave moment in the life of humanity.”

“Vaccines are not a magical means of healing, yet surely they represent, in addition to other treatments that need to be developed, the most reasonable solution for the prevention of the disease,” the pope told ambassadors from the 183 countries that have diplomatic relations with the Vatican.

At his annual meeting with the diplomatic corps Jan. 10, the pope also told them that facing today’s challenges “will require humanity to join together as one great family that, starting from different viewpoints, should prove capable of finding common solutions for the good of all.”

In his speech, the pope highlighted his hopes and concerns regarding the state of the world, ongoing wars and violence, the arms trade, today’s “cancel culture,” the treatment of migrants, the importance of increased funding for education and the need to step-up efforts for universal vaccinations for COVID-19.

Recalling the passing of Archbishop Aldo Giordano, a well-respected Vatican diplomat who died of COVID-19 in December, the pope told the ambassadors the fight against the pandemic still calls for “significant effort” by everyone — on a personal, political and international level.

Effective vaccination campaigns have decreased the risk of the “severe repercussions of the disease,” he said. “It is therefore important to continue the effort to immunize the general population as much as possible.”

Individuals have a duty to care for themselves and their health, which includes “respect for the health of those around us,” he said. But “sadly we are finding increasingly that we live in a world of strong ideological divides” where people let themselves be influenced by ideologies built upon “baseless information or poorly documented facts.”

“Every ideological statement severs the bond of human reason with the objective reality of things,” he said. “The pandemic, on the other hand, urges us to adopt a sort of ‘reality therapy’ that makes us confront the problem head on and adopt suitable remedies to resolve it.”

Governments can help by engaging citizens more and fostering constructive discussion, he said. “The lack of resolute decision-making and clear communication generates confusion, creates mistrust and undermines social cohesion, fueling new tensions. The result is a ‘social relativism’ detrimental to harmony and unity.”

Another area of concern, he said, is the field of multilateral diplomacy, which is undergoing “a crisis of trust” due to the reduced credibility of many institutions.

When social or governmental agencies make important resolutions or decisions “without a genuine process of negotiation in which all countries have a say,” the imbalance generates disaffection toward these groups and makes them “less and less effective in confronting global challenges,” he said.

The pope also criticized a “form of ideological colonization” that “leaves no room for freedom of expression.” He said it “is now taking the form of the ‘cancel culture’ invading many circles and public institutions.”

“Under the guise of defending diversity, it ends up cancelling all sense of identity, with the risk of silencing positions that defend a respectful and balanced understanding of various sensibilities,” he said.

Effective and respectful multilateral diplomacy is possible, he said, but it calls for mutual trust, the willingness to listen and share different views and to come to agreement and walk together.

The pope lamented the ongoing conflicts or tensions in Syria, Yemen, Libya, Sudan, Ethiopia, Ukraine and Myanmar, among other places.

And he encouraged Israel and Palestine to “rebuild mutual trust and resume speaking directly to each other, in order to reach the point where they can live in two states, side by side, in peace and security, without hatred and resentment, but the healing born of mutual forgiveness.”

He told the diplomatic corps these conflicts are worsened by the abundance and ready availability of weapons. “We deceive ourselves into thinking that these weapons serve to dissuade potential aggressors.”

Autonomous weapons’ systems must come under international scrutiny and nuclear arms must be abolished, he said, saying they “are an inadequate and inappropriate means of responding to security threats” and their possession “is immoral.”

Pope Francis also called for increased funding of education, which is critical for young people’s spiritual, moral and social growth.

“It pains me, then, to acknowledge that in different educational settings — parishes and schools — the abuse of minors has occurred,” he said. “These are crimes, and they call for a firm resolve to investigate them fully, examining each case to ascertain responsibility, to ensure justice to the victims and to prevent similar atrocities from taking place in the future.”

The pope also thanked those who work to ensure that migrants “are welcomed and protected, and to support their human promotion and integration in the countries that have received them.”

Some states face great difficulties with a large influx of people, he said, and “no one can be asked to do what is impossible for them, yet there is a clear difference between accepting, albeit in a limited way, and rejecting completely.”

“There is a need to overcome indifference and to reject the idea that migrants are a problem for others” and, instead, to adopt coherent and comprehensive ways to coordinate policies on migration and asylum, the pope said.

“The issue of migration, together with the pandemic and climate change, has clearly demonstrated that we cannot be saved alone and by ourselves,” he said, calling for people to recover “our sense of shared identity as a single human family.”

NEXT: Reversal in India: Missionaries of Charity can get foreign funds