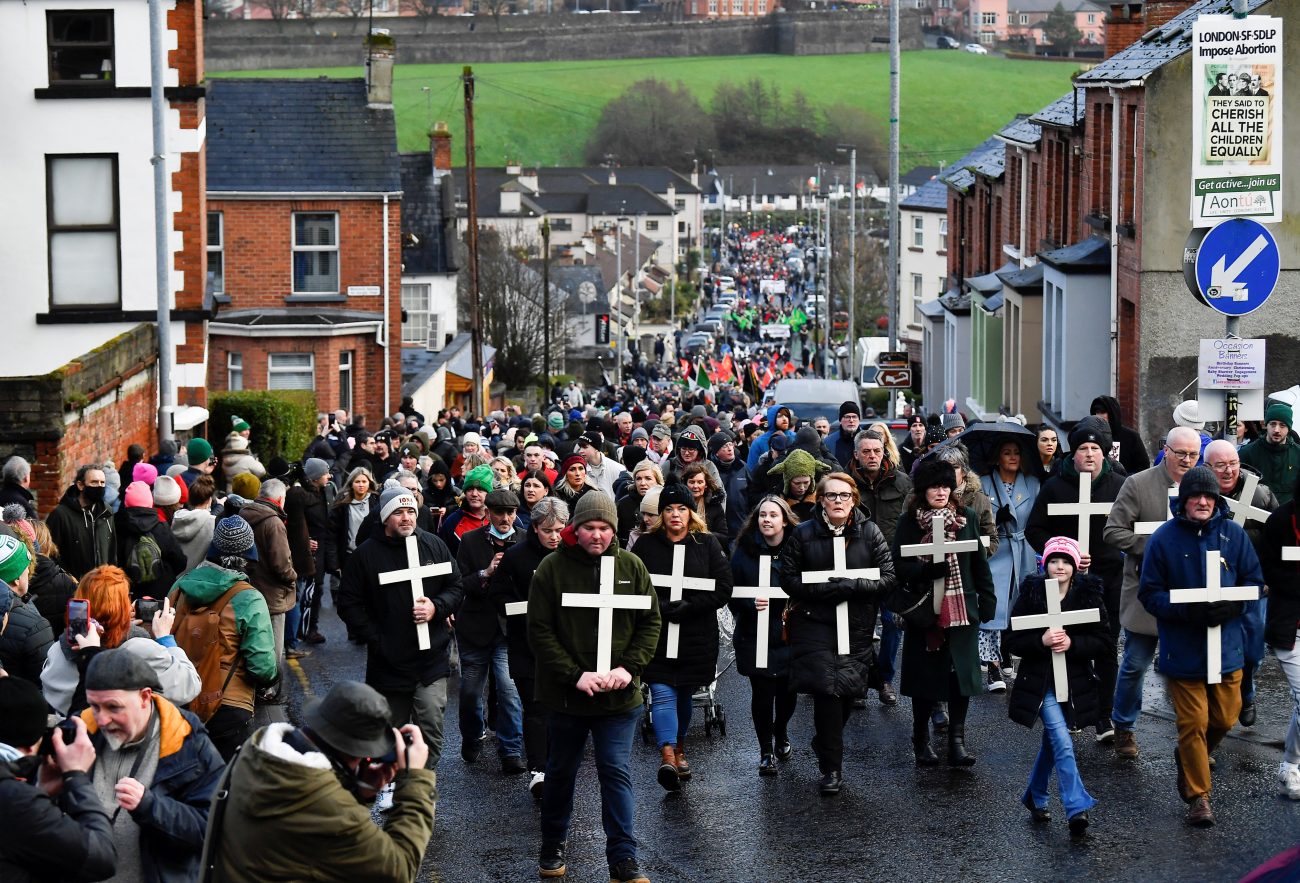 People carry crosses during a memorial service to mark the 50th anniversary of Bloody Sunday in Londonderry, Northern Ireland, Jan. 30, 2022. The head of the Irish bishops' conference has noted that no one has ever been prosecuted for the British army killing of 14 unarmed Catholics in 1972. (CNS photo/Clodagh Kilcoyne, Reuters)

DUBLIN (CNS) — The president of the Irish bishops’ conference used the 50th anniversary of the unlawful killing of 14 unarmed Catholics by the British army in Northern Ireland to criticize the fact that no one has ever been prosecuted.

“Very painfully, the Bloody Sunday families were denied for too long the truth about what happened to their loved ones. And sadly they are not alone. A legacy of heartbreak, and with it, a dark shadow of secrecy, still hangs over much of our troubled past,” said Archbishop Eamon Martin of Armagh, Northern Ireland, president of the bishops’ conference.

Speaking at Mass in St. Eugene’s Cathedral in Londonderry, Northern Ireland, the archbishop said: “Many families from right across our communities still endure the anguish of not knowing why, or how their loved ones were killed or injured or punished or targeted or disappeared or defamed or locked up, or interned or otherwise banished. 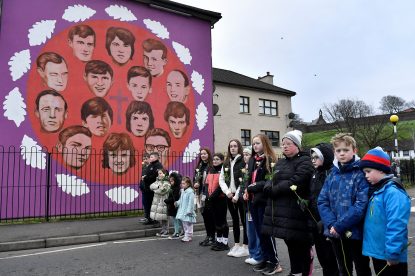 People pause near a mural showing the 14 victims of 1972’s Bloody Sunday during a memorial service to mark the 50th anniversary of the tragedy in Londonderry, Northern Ireland, Jan. 30, 2022. (CNS photo/Clodagh Kilcoyne, Reuters)

“Their unanswered questions linger on, as a constant nagging reminder to the next generation of unfinished business, of a grief that is unsatisfied with silence, a pain that does not go away but lies beneath, an unhealed wound that is passed on to the next generation. It is difficult for them to move on.”

On Bloody Sunday — Jan. 30, 1972 — the Parachute Regiment, an elite branch of the British army, shot dead 13 people; another died later from his injuries. Those killed were participating in a civil rights protest calling for fairness for Catholics in the allocation of public housing, employment and education.

The army immediately claimed that the people killed were terrorists, a claim always disputed by clergy members who participated in the demonstration and journalists who witnessed the event.

It took until 2010 for then-British Prime Minister David Cameron to admit that the killings were “unjustified and unjustifiable.” However, attempts to prosecute former soldiers responsible have so far proven fruitless, and British Prime Minister Boris Johnson has announced plans not to allow such prosecutions.

The families are currently challenging the British government’s resistance to prosecuting the soldiers in the courts.

The archbishop described as “hurtful” a proposal “to expect them (families) to simply ‘draw a line’ under the past” — a phrase that has been used by Johnson.

“The horror inflicted on Derry on that day has thankfully been challenged and exposed,” Archbishop Martin said. “We are grateful for the dignity, determination and example of the families, friends and neighbors of those whose lives were so cruelly taken … just a short walk from this cathedral.

“The shocked silence which fell on Derry when the shooting stopped around 4:40 p.m. that afternoon was compounded by the deliberate silence of governments and politicians who willfully ignored the truth.

“Immediately, the priests who had been present, tending to the wounded and dying, and many other eyewitnesses, called it as it was: willful murder; shooting indiscriminately; no provocation,” he said.

Referring to his own experience growing up in Londonderry, Archbishop Martin told the congregation: “Even though I was only 10 years old at the time, I had a sense of the awful calumny that followed Bloody Sunday. … The pain of loss suffered by the Bloody Sunday families continued to be sharpened for many more years by blind eyes, deaf ears and the deliberate concealment of the truth.”

On the wider issue of dealing with the legacy 1968-1998 civil conflict in Northern Ireland, which saw around 3,500 people killed and many more injured, the archbishop said: “Building meaningful reconciliation is complicated and delicate. As a society, we have to find ways to open ourselves to the hidden truths about our past, so that proper healing can happen.

“We have begun to explore and build a shared vision for our future on this island. But if we are to unite hearts and minds and nourish a genuine hope for lasting peace and reconciliation in Ireland, then we have to work together on healing the legacy of our shared past, because peace can only flourish in the light of knowledge, truth and justice,” he said.

As part of the commemoration in Londonderry, family members of those who died laid wreaths at a mural that depicts then-Father Edward Daly — later Bishop Edward Daly of Derry — who gave the last rites to many of the victims and ferried some of the injured to safety waving a white handkerchief.

Bishop Daly was a key supporter of the families’ calls for justice before his death in 2016. 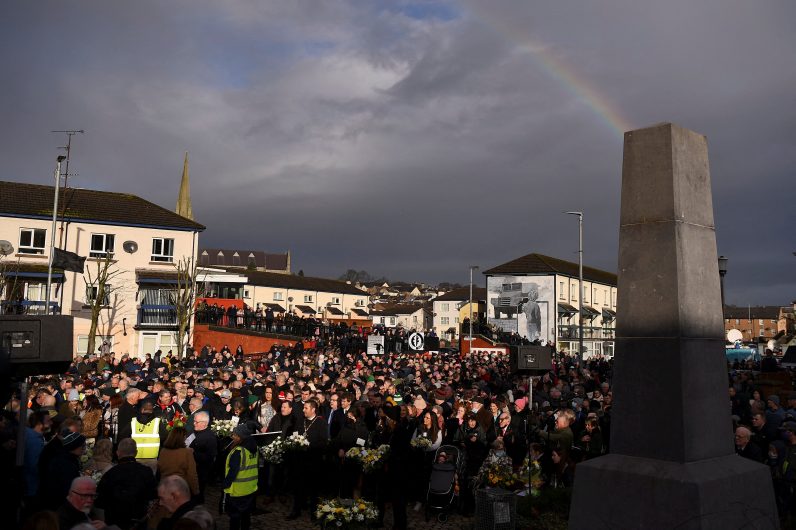 People attend a memorial service to mark the 50th anniversary of Bloody Sunday in Londonderry, Northern Ireland, Jan. 30, 2022. Families of the 14 unarmed Catholics killed by the British military in 1972 are challenging the British government’s resistance to prosecuting the soldiers in the courts. (CNS photo/Clodagh Kilcoyne, Reuters)