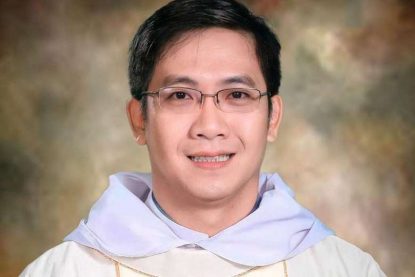 Dominican Father Joseph Tran Ngoc Thanh, 40, who provided pastoral care for ethnic groups in the Diocese of Kon Tum, Vietnam, was stabbed to death while hearing confessions Jan. 29, 2022. He is pictured in an undated photo. (CNS photo/submitted)

Local police said they arrested his killer, who is reported to be a drug abuser.

Bishop Louis Nguyen Hung Vi of Kon Tum, who celebrated a memorial Mass for Father Thanh Jan. 30, said he was stunned with grief by the priest’s sudden death. He said he never thought such a horrific story would happen before Tet, the Lunar New Year holiday.

“We could not understand God’s plans except for offering our brother to him,” Bishop Vi said.

He noted that the real beauty of a priest is to die while offering pastoral care to people.

Ucanews.com reported that Dominican Father Paul Cao Thang said his confrere was extremely gentle and had good relationships with all people.

“The incident was painful but beautiful — people love the deceased father but have much pity on those who are controlled by evil,” said Father Thang.

He said Father Thanh’s death reminded people to work together to make evil disappear from the world.

On Jan. 31, after Father Thanh’s body had been transferred to St. Martin de Porres Monastery in Bien Hoa, he was buried in a cemetery for Dominicans.