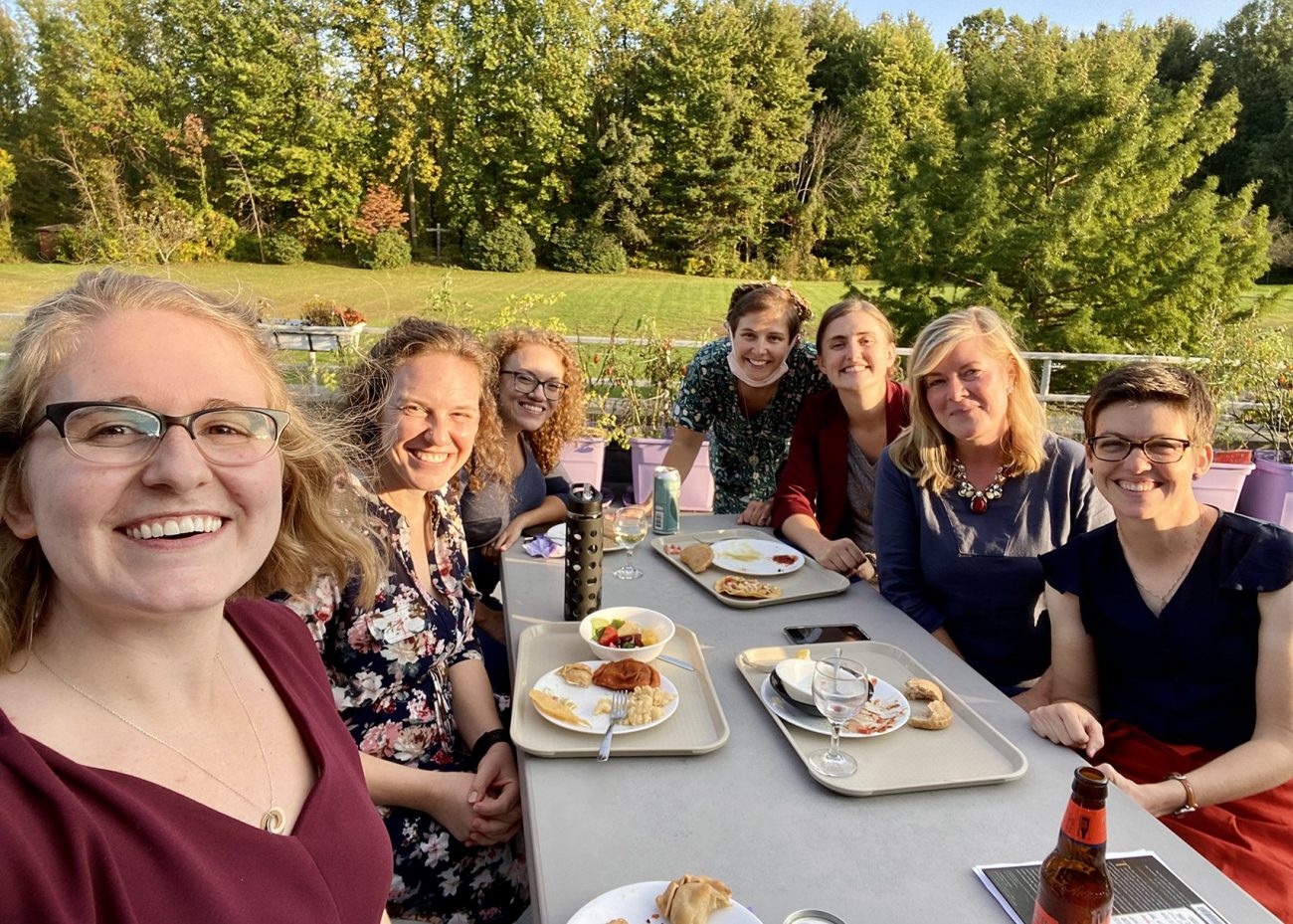 When Judith Valente, a Benedictine oblate, leads contemplative retreats both online and in monasteries around the country, she has been noticing that laypeople — whether Catholic or spiritual-but-not-religious, married or unmarried, male or female — outnumber the monks and sisters about three to one.

“And why is this?” said Valente, who is an author and co-chair of the movement Being Benedictine in the 21st Century. “There’s a hunger out there for genuine communion. Not just communication, but genuine communion, and one of the biggest monastic values is hospitality. Here, they suddenly feel valued, like they belong here.”

Drawing parallels between today and the time of St. Benedict of Nursia, Valente doesn’t think the renewed interest in monasticism is a fluke either.

The father of Western monasticism, Benedict wrote the Rule, a document that would ultimately serve as the foundation of his monastic tradition, in the sixth century during the collapse of the Roman Empire, Barbarian invasions, loss of institutional credibility, and political leaders prioritizing personal interests over the common good.

“He lived in a time that sounds a lot like our nightly news,” said Valente, who is an oblate with the Benedictine Sisters of Mount St. Scholastica in Atchison, Kansas.

She made the comments in an interview with Global Sisters Report.

Monastic traditions — including stability, silence, community, hospitality, love of learning and continual growth, to name a few — are speaking to this moment, and those ranging from the nonreligious to apostolic Catholic sisters are listening.

In recent years especially, Catholic sisters in apostolic communities — which tend to lead a more mobile and ministerial lifestyle with less structure than their monastic counterparts — have been reengaging with the communal contemplative dimension of religious life.

The Second Vatican Council lit a fuse for religious congregations in the early 1960s. Suddenly, sisters were encouraged to return to their founding visions through their action-oriented ministries, modeling the life of Jesus with their community’s charisms at the center of their calls to action.

But as needs shift, so do the ways that religious communities respond, and today, many feel called to focus on society’s growing spiritual hunger and to reclaim the value of collective contemplation.

“There’s a great interest in bringing back together the two sides of a coin — contemplation and action in new ways — especially through apostolic religious,” said Sister Nancy Sylvester, whose Immaculate Heart of Mary congregation in Monroe, Michigan, is apostolic. Indeed, many apostolic congregations today refer to their charisms as “contemplation in action.”

“It’s an evolutionary process,” she said, noting that the roughly 60 years of the pendulum swing toward activism is “not a lot in evolutionary time,” but enough to consider a “new integration” for a future that is still emerging.

Asking why there is a renewed interest in monasticism lends itself to an idle exercise in speculation: To say that monasticism is experiencing a “comeback” is to misunderstand the tradition, as Benedictine Sister Linda Romey explained.

Monasticism, rather, is experienced as an “evolution, a moving forward,” with no going back, said Sister Romey, a member of the Benedictines of Erie, Pennsylvania.

“If monasticism is a doorway to a more contemplative life, that means it is a doorway to the future, to a deeper knowledge of what it is to be a human creature made in the image of God,” she told GSR.

The Rev. Adam Bucko, an Episcopal priest, isn’t convinced that humanity today is going through a “process of secularization,” or that there is even a meaningful distinction between the secular and the sacred.

“They’re telling us the tabernacle is empty,” he said, yet “many people who identify as not religious, actually, are not in churches, because they found God elsewhere: in nature, in activism, in joining people who are fighting for justice, in what could be called less religious spiritualities, like mindfulness.”

Rev. Bucko is co-founder of the Center for Spiritual Imagination, a monastic community that weaves Benedictine, Franciscan, Cistercian and Carmelite traditions with other spiritual influences. He believes that how someone feels about churches isn’t a predictor for how they feel about God, spirituality or the mystical quest for meaning and purpose.

Statistics bear that out. A third of young people are religiously unaffiliated — three times the rate of their grandparents’ generation. But tucked away in that statistic is a crucial though less-touted detail: Among those who are nonreligious, about two-thirds say they still believe in God to varying degrees.

Movements like Nuns and Nones, a grassroots community uniting Catholic sisters and young spiritual seekers, have provided space for spiritually ambiguous conversations among those interested in exploring the contemplative as well as the communal.

Perhaps it’s natural that monasteries have since become a home for some of its members.

For the past two years, Katie Gordon, Nuns and Nones co-founder, has lived with the Erie Benedictines. What began as a summer internship morphed into the decision to live indefinitely in the monastery’s Pax Priory community.

Seeing firsthand how the Benedictines live their life in searching for God in a “generative, open way” made Gordon want to stick around and learn more about their 1,500-year-old lifestyle, the community model for “living otherwise.”

Gordon, 30, grew up Catholic but spent most of her 20s on a spiritual expedition, focusing less on pinning down the specifics of her beliefs and more on drawing inspiration, meaning and mystical nourishment from a variety of religious traditions.

“This is a huge moment of upheaval that we will be moving through, and this alternative way of being provides a community model to move through that,” she said regarding this time in history.

Though the word monasticism often conjures images of extreme religiosity — likely of reclusive individuals immersed in Scripture — the concept is more expansive.

“Monasticism is a lifestyle word, not a religion word,” said Benedictine Sister Judith Sutera from Atchison, Kansas. “It’s an attempt to see unity in all of creation.”

Benedictine Sister Joan Chittister, a theologian and author, recalled the frustrations she felt as a child when the big questions around God would arise, and the unsatisfying answers that would follow to simply have faith, despite finding it all unbelievable.

“We do not, by and large as a culture, have a God big enough to believe in,” she said. “We have diminished God. We’ve made God a puppeteer, a magician, a vending machine, a warrior, a judge, all slivers of ourselves.

“But, of course, anybody with an understanding (looks) up in the sky at night, saying to themselves, what is out there? Where did this all come from? Where is it going? And what about the people who have left our lives? Where are they? Those are cosmic questions. And I believe that, for me, my God is a cosmic God.”

Monasticism — which Sister Chittister defines in her most recent book, “The Monastic Heart,” as “the single-hearted search for what matters” in any and every life — appeals to those questions and the exploration of a God who “is not a drawing of our own lives,” she said.

“Do I think this (practice) has to be Christian or Catholic?” she said. “Absolutely not.”

For many monastic sisters, like Benedictine Sister Idelle Badt, silence is one of the tradition’s greatest offerings, allowing her to “unplug from the world” when she returns to her Annunciation Monastery in Bismarck, North Dakota.

“I don’t have the constant bombardment of white noise,” she said, adding that it wasn’t until she experienced shared silence in community that she realized how necessary silence is. “There is something magical when you sit in complete silence with 40 other people; your thoughts change, your body relaxes, and you feel closer to God and those around you.”

Escaping constant chatter and cross-talk is particularly appealing to the younger members of Sister Megan McElroy’s Dominican congregation in Grand Rapids, Michigan, she believes. Sister McElroy, who served as co-director of her community’s novitiate 2010-2018, also spent three weeks in an immersion experience with the Dominican contemplative community in Squamish, British Columbia, in 2016, working on her thesis project regarding the preaching missions of Dominican nuns who live a contemplative, monastic life.

In a sense, younger sisters are looking to reclaim some of the traditions that older sisters “spent a lifetime letting go,” she said.

Now, among the community’s older members, Sister McElroy added, there’s a “recognition that there was some value in those practices, so how do we bring them back? The newer members are bringing an awareness to communities, that this is a gift for us to be able to live in common, to have times of quiet. That refreshes us, and gives us the energy to go about our ministry in a fuller way.”

Chief among the misconceptions around monastic life (in addition to the image of all monastics being cloistered) is the perception of tedium, “marching to meals and subjugating our individualism,” Sister Sutera said.

“It couldn’t be farther from the truth. … Predictability doesn’t mean it has to be monotonous,” she said, adding that the lifestyle instead is about offering stability in an unstable world.

Sister Sutera suggested that people “rethink” their perception of monasticism, and how it can apply to their lifestyle.

“Service and contemplation should not be mutually exclusive. That’s what we have to recognize: that the world is starving for prayer and communion, and there are different ways to live that out. Ours is just a structure that has worked for 1,500 years.”

PREVIOUS: Grant will fund Catholic institutes, including at U Penn

NEXT: Florida House OKs bill to ban abortions after 15 weeks