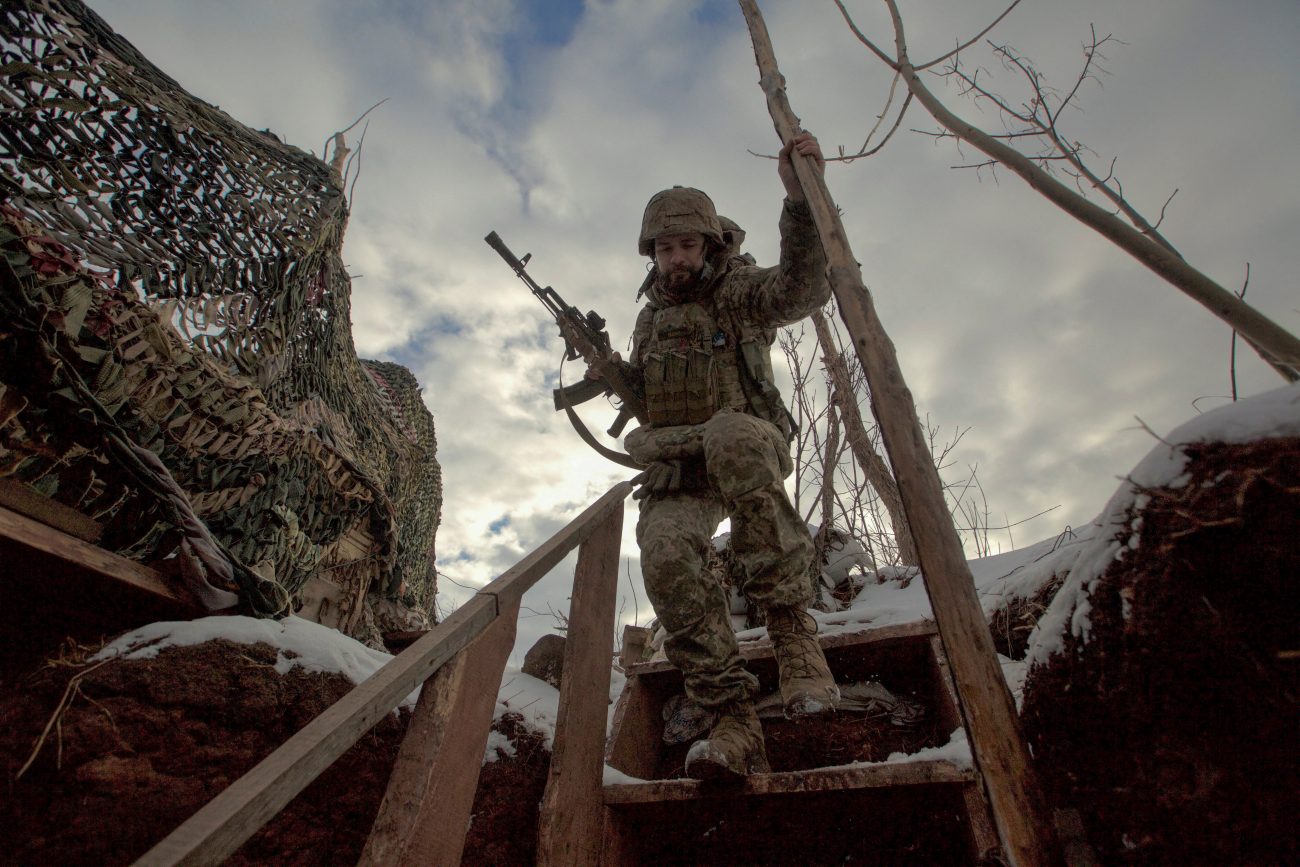 A service member with the Ukrainian armed forces walks past combat positions near a line of separation from Russian-backed rebels near Horlivka in the Donetsk region of Ukraine Jan. 22, 2022. (CNS photo/Anna Kudriavtseva, Reuters)

As fears of a Russian invasion of Ukraine continue to mount, the Ukrainian Catholic bishops of the U.S. have called for a three-day prayer vigil “for peace and the conversion of the hearts of those who preach violence and escalate war.”

“We ask that each pastor and community, each family and each person, participate in this vigil in whatever way is possible for them,” said the bishops. “May our churches be open throughout the day, may the prayer of the church interchange with personal contemplation. Conduct and participate in services, pray the Jesus Prayer, the Marian Rosary, the Paraclesis (a prayer service of supplication), sit with the Scriptures. Fast in order to focus on the hope that only God gives.”

Russia has amassed more than 100,000 troops near the Ukrainian border, while launching large-scale joint maneuvers with neighboring Belarus on Feb. 10.

In the past few days, a number of countries, including the U.S., the U.K. and Germany, have urged their nationals to leave Ukraine.

A massive Jan. 14 cybersecurity attack, regarded by many as a prelude to Russian military action, crippled approximately 70 Ukrainian government websites, with an onscreen message warning users to “be afraid and expect the worst.”

“Over the last weeks, the world has become fully aware of the fact that democratic Ukraine and its freedom-loving people are increasingly surrounded by hostile military forces prone for invasion,” said the bishops.

The threat marks what the bishops termed an escalation of “the eight-year Kremlin-led war” since Russia’s 2014 annexation of Ukraine’s Crimean Peninsula.

That same year, Russian-backed separatists proclaimed “people’s republics” in the eastern regions of Donetsk and Luhansk, together known as the Donbas. The move came just 23 years after Ukraine gained independence following the collapse of the Soviet Union, of which it had been a part.

Since 2014, clashes, shelling and sniper attacks have become common in eastern Ukraine. The United Nations reported close to 1.5 million registered internally displaced persons in the country as of 2021, and at least 3,353 civilian deaths and more than 7,000 civilian injuries between April 2014 and March 2020. In total, between 14,000 and 15,000 are estimated to have been killed in the conflict to date.

A full-scale Russian invasion of Ukraine would “bring about devastating bloodshed and untold human suffering,” resulting in “a disaster with global repercussions,” the bishops warned.

“Deaths could be in the tens of thousands and refugees in the millions,” they said. “The economic and political shockwaves of the social devastation and material destruction in Ukraine will be worldwide.”

Amid the grave situation, the bishops urged faithful to “pray and be full of hope,” citing Scripture passages from 1 Peter and Psalms 20 and 125.

“Ukrainian faithful of all confessions have witnessed miracles,” they said. “In recent history we saw the collapse of the Iron Curtain, the dissolution of the Soviet prison of nations, the liberation of our churches, which occurred without war and bloodshed. We put our trust in God and ask for divine intervention. … Know the Lord and God’s love for the world!”

(To donate to victims of the humanitarian crisis in Ukraine, visit the website of the Ukrainian Catholic Archeparchy of Philadelphia at https://ukrarcheparchy.us/donate)