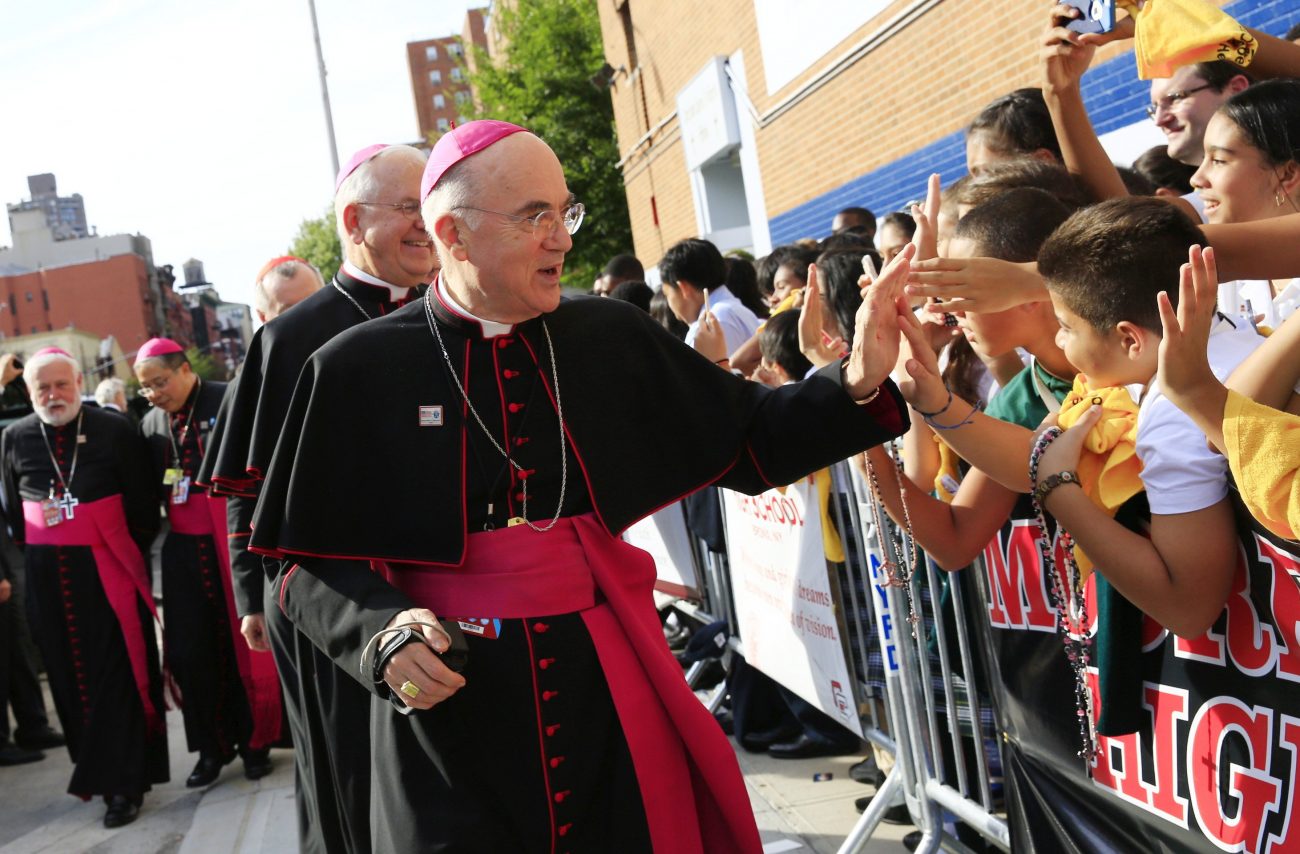 Archbishop Carlo Maria Viganò, then-apostolic nuncio to the United States, greets children during Pope Francis' visit to Our Lady Queen of Angels School in East Harlem, New York, in this Sept. 25, 2015, file photo. The head of Italy's military ordinariate urged members of the military and police to ignore Archbishop Viganò, who issued a statement calling on them to refuse to be vaccinated and to not enforce Italy's COVID-19 policies. (CNS photo/Eric Thayer/The New York Times, pool)

ROME (CNS) — The head of Italy’s military ordinariate urged members of the armed forces and police to ignore a call from Archbishop Carlo Maria Viganò to disobey orders to enforce measures aimed at stemming the spread of COVID-19.

“As military and as citizens, that which guides us is and must be a sense of great responsibility,” Archbishop Santo Marcianò, the head of Italy’s military archdiocese, wrote in a statement Jan. 31. “Don’t be confused or discouraged in carrying out your mission.”

Archbishop Marcianò urged members of the military and the police to disregard “a missive with which a bishop, a former apostolic nuncio known for his conspiracy theory outbursts, urged disobedience on the part of the men and women of the forces of order.”

Archbishop Viganò, the former nuncio to the United States and an opponent of COVID-19 vaccinations and restrictions, had published a message to Italian military and police Jan. 29. Archbishop Viganò, who has been in hiding since calling for Pope Francis to resign in 2018, urged the Italian forces to follow the example of their colleagues in ages past “who knew how to say no to the abuse and violence of the dictatorship, refusing to collaborate with a tyrannical power in persecuting and discriminating against its own citizens.”

“In these two years, like all citizens, you have witnessed a global coup d’état, planned and carried out under the pretext of a pandemic, in which the most basic principles of law, science and professional ethics have been trampled underfoot,” Archbishop Viganò said.

“They have used you as automatons,” he told the military and police. “Remember Nuremberg,” the trials of Nazis after World War II, and how the condemned tried “to justify themselves with ‘I was following orders.'”

Urging the military and police to ignore the former nuncio, Archbishop Marcianò said that while most citizens were rallying together to stop the coronavirus and the death it has brought with it, there still are some people “even within the ecclesial world” who have embraced “extreme positions in disagreement with the directives of the health and public authorities and in open contrast with the indications of the church.”

Moreover, he said, there are those like Archbishop Viganò who are using their positions to “disparage Pope Francis, creating agitation and not a little confusion.”

In the end, he said, “each person is called to safeguard his or her own health and life and, at the same time, to protect the health and life of others, especially those who are most fragile.”

The pandemic continues to sow sickness and death, the archbishop said, but “like every human drama, also mysteriously succeeds in arousing courage, love and sacrifice in those who, like you, continue to care and to take care of the victims.” 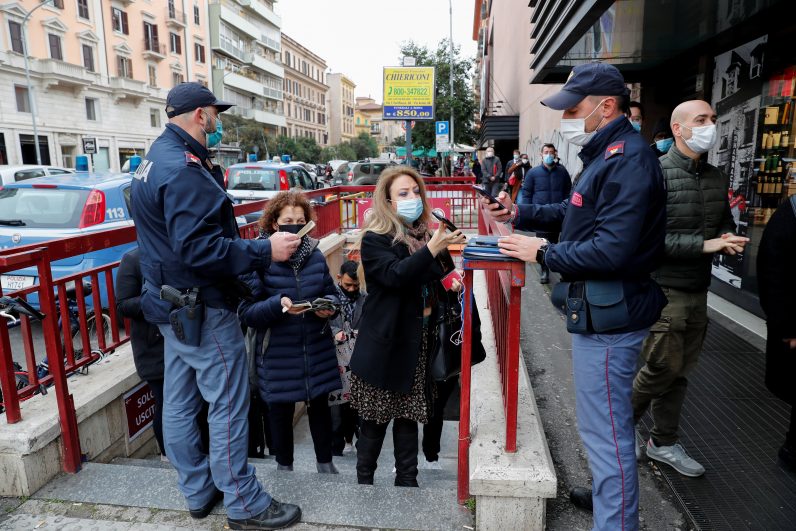 Police officers check COVID-19 health passes, known as green passes, at a subway station in Rome in this Dec. 6, 2021, file photo. The head of Italy’s military ordinariate urged members of the military and police to ignore Archbishop Carlo Maria Viganò, former apostolic nuncio to the United States, who issued a statement calling on them to refuse to be vaccinated and to not enforce Italy’s COVID-19 policies. (CNS photo/Remo Casilli, Reuters)

PREVIOUS: After man disrupts audience, pope leads a Hail Mary for him