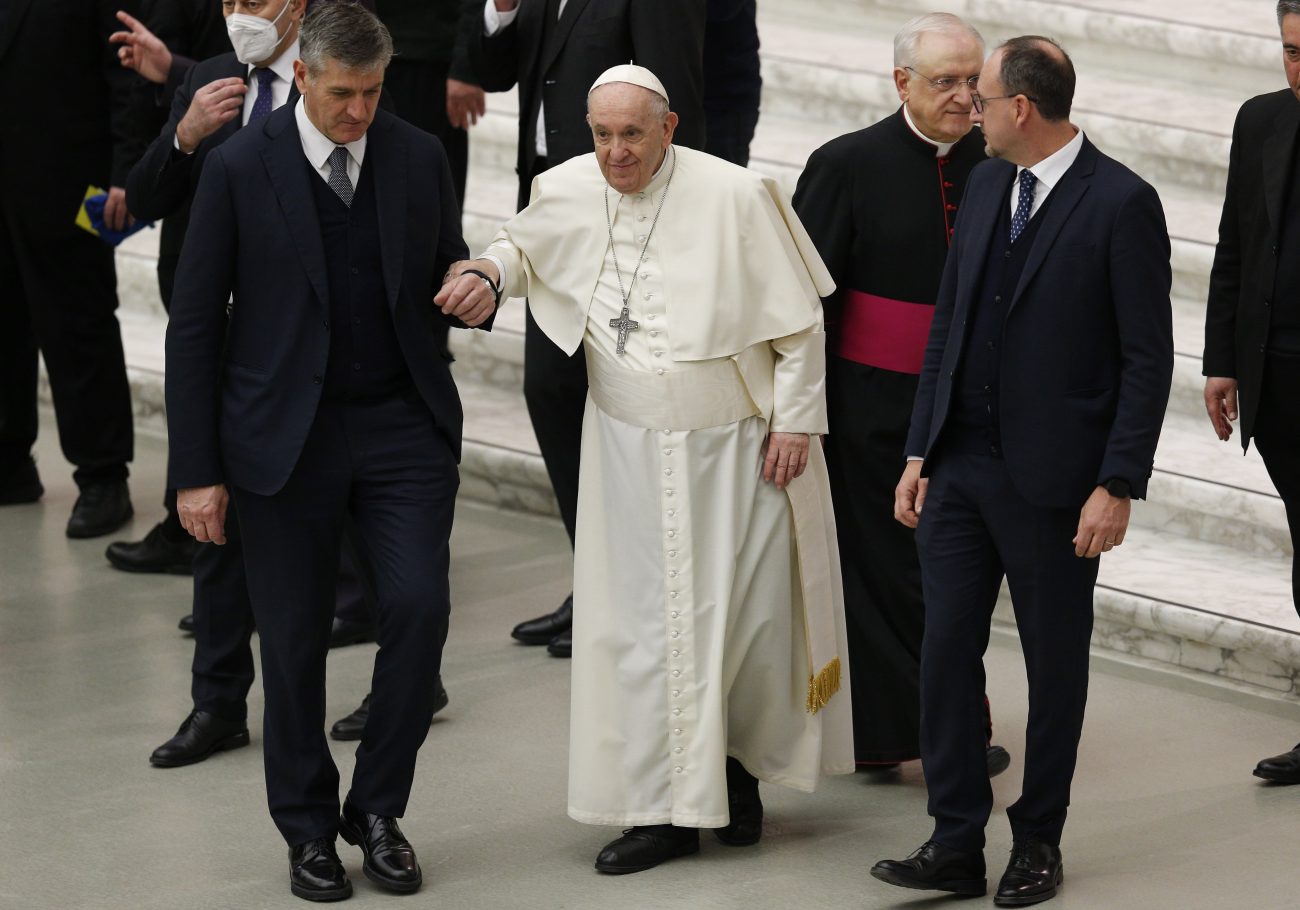 Pope Francis holds the arm of his aide, Sandro Mariotti, was he walks during his general audience in the Paul VI hall at the Vatican in this Jan. 26, 2022, file photo. The Vatican announced that the pope will not travel to Florence Feb. 27 because of severe knee pain. (CNS photo/Paul Haring)

VATICAN CITY (CNS) — Pope Francis will not be attending two scheduled public events so he can rest a painful knee, the Vatican said.

The pope will not be going to Florence Feb. 27, and he will not preside over Ash Wednesday Mass March 2, the Vatican announced Feb. 25.

The pope will be absent from these events “because of severe knee pain, for which the doctor prescribed a period of more rest for his leg,” said a communique from the Vatican press office.

The pope had been scheduled to visit the Italian city of Florence to speak at a meeting of bishops and mayors of the Mediterranean region and to celebrate Mass at the Basilica of the Holy Cross. The visit was also to have included an encounter with refugee families.

On Ash Wednesday, the pope had been scheduled to take part in the traditional penitential procession that begins from the Benedictine monastery of St. Anselm on Rome’s Aventine Hill to the Dominican-run Basilica of Santa Sabina, followed by Mass and the distribution of ashes.

According to his official schedule, the pope’s only publicized meeting Feb. 25 was receiving the letters of credence from Greece’s new ambassador to the Holy See, Aikaterini-Katia Georgiou.

But the pope also visited the Russia’s Embassy to the Holy See that morning.

In addition to repeated bouts of sciatica that affect his ability to stand for long periods, the pope also has been open about his knee problems.

At the end of his general audience Jan. 26, the pope told visitors that he would be unable to follow his customary practice of walking up to people to greet them. He instead sat in a chair at the foot of the stage for people to come up to him.

“I have a problem with my right leg; a ligament in my knee is inflamed,” he said. “It’s a passing thing.”

Joking with the crowd, he said, “They say this only comes to old people, and I don’t know why it has happened to me.”

Before the audience, the 85-year-old pope had shown some difficulty in walking across the stage with a noticeable limp.

NEXT: Europeans, shocked at Russian invasion of Ukraine, pray for peace