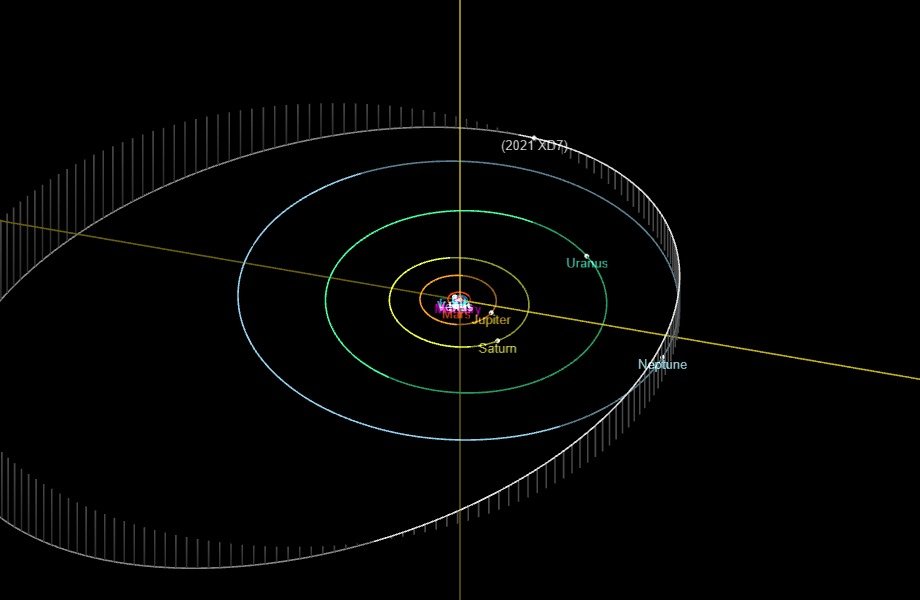 "2021 XD7," an object orbiting the sun beyond Neptune, is seen in this NASA image. Jesuit Father Richard Boyle, an astronomer at the Vatican Observatory, and two other astronomers discovered "2021 XD7" using the Vatican Advanced Technology Telescope in Arizona. (CNS photo/NASA)

VATICAN CITY (CNS) — Two Jesuit astronomers from the Vatican Observatory were part of recent discoveries: one finding a new member of the solar system and another finding evidence for a long-lost galaxy “eaten up” by the Milky Way.

The Vatican Observatory made the first announcement Feb. 2, saying Father Boyle discovered the new object in early December after his observations were analyzed by Kazimieras Cernis, a Lithuanian astronomer and astrophysicist.

Peter Vereš, who works at the International Astronomical Union’s Minor Planet Center, computed the object’s orbit, it said. Vereš is an alumnus of the Vatican Observatory’s 2007 summer school program and its “super” summer program for alumni in 2009.

Father Boyle, who specializes in observational astronomy, made the discovery using the Vatican Advanced Technology Telescope on Mount Graham in Arizona.

“2021 XD7” is a “trans-Neptunian object,” which is any minor or dwarf planet in the solar system whose orbit is outside the orbit of Neptune, the system’s outermost planet.

Not much is known yet about the object’s size other than it is smaller than Pluto — the first “trans-Neptunian object” (TNO) to have been discovered. The International Astronomical Union downgraded the status of Pluto from planet to “dwarf planet” in 2006 because it is not “gravitationally dominant” enough to clear away bodies of comparable size in its vicinity.

Discovering TNOs adds to building a model of how the solar system may have formed, and some scientists believe these objects may point out the location of “Planet Nine,” a hypothetical planet about the size of Neptune farther away than Pluto.

The Vatican Observatory announced Feb. 21 that Father D’Souza was one of 10 astronomers contributing to a study led by Khyati Malhan of the Max Planck Institute for Astronomy. The team used new data from the Gaia spacecraft to study the remains of smaller galaxies that merged with the Milky Way, which began forming 12 billion years ago. Mapping out these mergers is like making the Milky Way’s “family tree” and reconstructing how it was formed.

The astronomers confirmed evidence of five previously known mergers with former dwarf galaxies and found evidence for a sixth merger with a dwarf galaxy the authors called Pontus, the name of one of the children of the Greek goddess Gaia, as well as a “new candidate merger,” said the study, published in The Astrophysical Journal Feb. 20.

Detecting such mergers in new ways is now becoming possible “due to the amazingly rich” batches of data being sent by the Gaia space mission, the study said. “This places us in a very exciting position to disentangle the merging events of the Milky Way halo” and to explore the chronological history of the galaxy.

NEXT: Celibacy not ‘divine law’ for priests, but promotes holiness, speakers say