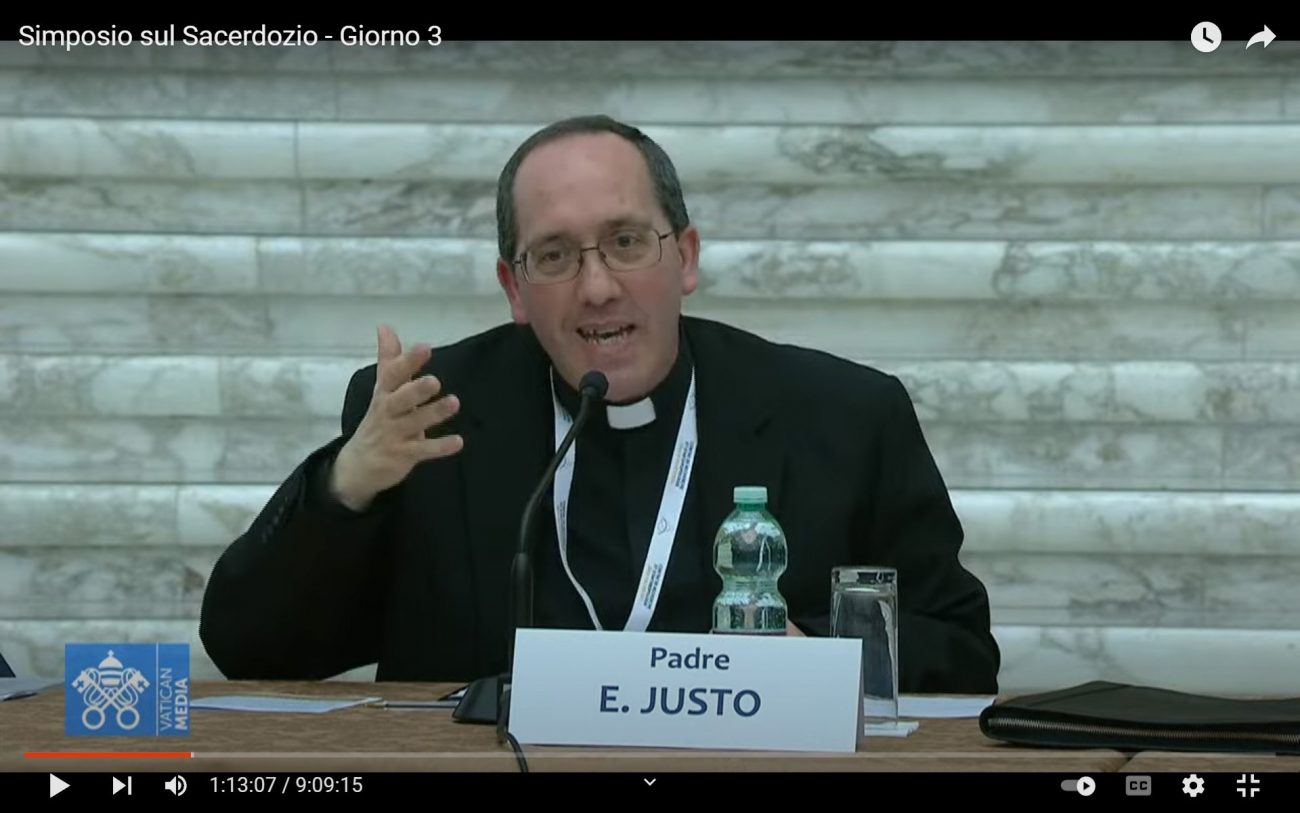 Father Emilio Justo, a professor of theology at the Pontifical University of Salamanca, Spain, speaks about the general requirement of celibacy for Latin-rite Catholic priests during an international conference on the priesthood at the Vatican Feb. 19, 2022. (CNS screen grab/Vatican Media)

VATICAN CITY (CNS) — The requirement that most priests in the Latin rite of the Catholic Church be celibate has theological and spiritual foundations and not only practical motivations, said speakers at an international conference on priesthood.

Jesus’ chastity, poverty and obedience were not “incidental or simply functional,” but expressed his total union with God and dedication to the salvation of humanity, Jesuit Father Gianfranco Ghirlanda, a well-known canon lawyer, said Feb. 19 at the Vatican conference.

The church has never claimed that celibacy is “intrinsic” to the priesthood, he said, and, in fact, the Eastern Catholic churches have maintained the discipline of having both celibate and married clergy, and the Latin church has welcomed married priests coming from other denominations.

The status of married Eastern Catholic priests was raised in several of the questions posed to both Father Ghirlanda and Father Emilio Justo, a professor of theology at the Pontifical University of Salamanca, who also spoke Feb. 19.

Making greater claims about the relationship of celibacy to priesthood will not help Catholics understand its “profound spiritual and theological meaning,” Father Ghirlanda responded; celibacy “is not a divine law, because otherwise the discipline of the Eastern churches would not be possible, and it would not have been possible to have married priests in the early church, even if they were called to continence,” as Father Justo had said in his speech.

A married priesthood “is not a second-class priesthood,” Father Ghirlanda said, because married priests also proclaim the Gospel, lead the Christian people and celebrate the sacraments.

Celibacy or marriage “does not touch the priesthood in itself,” he said.

In his speech, Father Ghirlanda said that in the Code of Canon Law for the Latin church, celibacy is seen as a gift from God that enables priests “to adhere more easily to Christ with an undivided heart and dedicate themselves more easily to the service of God and his people.”

Catholic theology, spirituality and church law on priesthood, he said, aim to promote a “self-giving love,” one in which celibacy is not lived “in a repressive way as mortification and denial,” but as an expression of the biblical call to a “purity of heart” requiring a progressive “liberation from passions and the stripping away of earthly possessions.”

Father Justo, in his presentation on the history of celibacy, told participants that in the first millennium of the church, married priests were common, “but I believe there were predominant tendencies” favoring celibacy and requiring married priests to “live perfect continence,” that is, forgoing sexual relations with their wives.

The requirement to live marriage in this “abnormal way” was primarily theological, he said, and was based on a priest’s role as mediator between God and the faithful, a role that required “purity.”

That purity, he said, often is seen as merely ritual, “but it is related to holiness” and conformity to Christ, who offered his whole self to God for the salvation of the world.

“Celibacy is not a call to loneliness but to communion,” Father Justo said. “The church is the space where the ordained minister loves and is loved.”

Celibacy, he said, is a special way of being “configured to Christ” and responding to the call “to love like him and with him, to serve with him and like him in the way that Jesus historically loved, which was in a celibate way.”

NEXT: Traditionalist priests can continue with pre-Vatican II liturgies