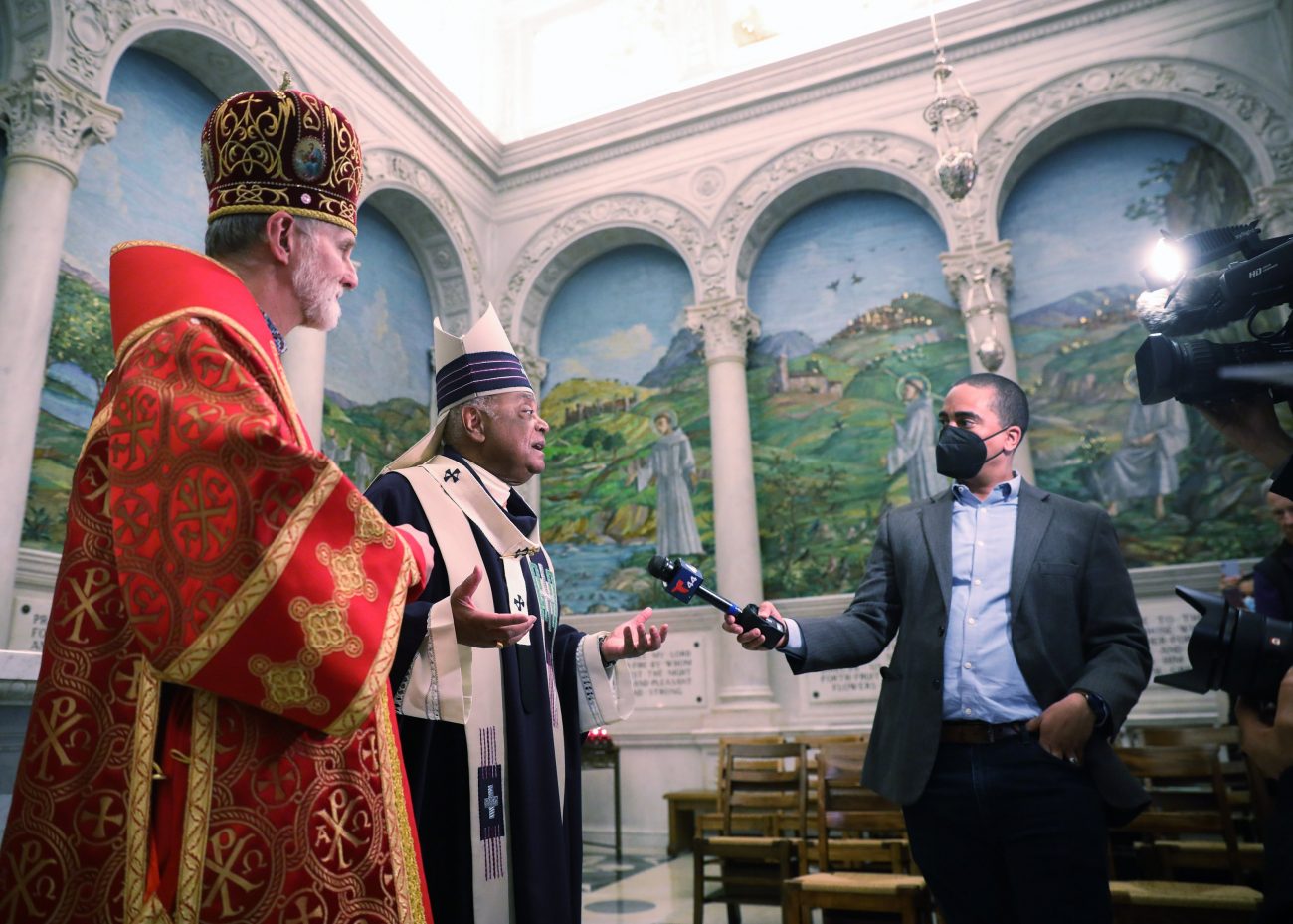 WASHINGTON (CNS) — As Pope Francis and Catholics throughout the world did on Ash Wednesday, March 2, Washington Cardinal Wilton D. Gregory prayed and expressed solidarity with the people of Ukraine as they are enduring a brutal Russian military invasion of their country.

Cardinal Gregory also gave ashes to President Joe Biden at the White House, where they prayed for the people of Ukraine.

At noontime, the cardinal concelebrated an Ash Wednesday Mass at the Cathedral of St. Matthew the Apostle in Washington with Metropolitan Archbishop Borys Gudziak of the Ukrainian Catholic Archeparchy of Philadelphia.

The archeparchy includes parishes in the District of Columbia, Maryland, Virginia, Delaware, Pennsylvania and New Jersey.

Before blessing and distributing ashes to people attending the Mass, Cardinal Gregory decried the heart-rending violence being inflicted on the people of Ukraine by the Russian military.

In his homily, the cardinal said, “Our Ukrainian brothers and sisters should be uppermost in our prayers and in our actions during this entire season of Lent.”

Earlier that morning, Cardinal Gregory had made a brief pastoral visit to the White House.

Knowing the challenges of the president attending an Ash Wednesday Mass at a local Catholic church during a time of heightened security, the cardinal offered to come to the White House and administer ashes to the president, who is Catholic and a regular Massgoer.

The Hill website broke the news about Biden discussing how he had received ashes from Cardinal Gregory that morning. The president also had said he agreed with Pope Francis’ call for the world’s Catholics to remember the people of Ukraine by praying and fasting on Ash Wednesday.

The Archdiocese of Washington issued a statement that afternoon noting that Cardinal Gregory’s visit to the White House “was a private moment, at which the president and the cardinal prayed for the people of Ukraine.”

Cardinal Gregory told the Catholic Standard, Washington’s archdiocesan newspaper, that he had gone to the White House and given ashes to Biden and his sister, Valerie Biden Owens.

“We obviously spoke about the violence in Ukraine, and our desire that a diplomatic solution will be accomplished to bring peace to the people there and to end the carnage,” the cardinal said.

After the Ash Wednesday Mass, Cardinal Gregory and Archbishop Gudziak met briefly with members of the press in a cathedral side chapel to discuss the crisis in Ukraine.

“It’s going to be a special Lent. … It’s a pilgrimage to Easter, and it ends with the Resurrection,” Archbishop Gudziak said when asked what this Lent will mean to the people of Ukraine.

“But there is a crucifixion, and that’s what Ukraine is enduring right now,” he said. “We thank everybody — the cardinal, the president, the country, all people of goodwill, for the solidarity right now.”

The archbishop also said, “Ukrainians need prayers. They need help defending themselves. They need aid for this incredible humanitarian crisis. They need to have people know they are suffering for freedom.”

As the world is witnessing what is unfolding in Ukraine, “the darkness does not tolerate the light,” Archbishop Gudziak said. “We can see this war has been won morally in Ukraine. The whole world is together in condemning this invasion. The important thing is to make sure lives can be saved, that the trauma can be stopped, and that this great act of state terrorism can be stopped in its tracks.”

He noted Ukraine had a “disastrous and devastating 20th century,” when millions of Ukrainians were killed in times of war, occupation and famine.

To the Ukrainians, faith “is not just a pious thought. It’s the sacrifice of their lives,” the archbishop added. “Our Lord teaches that there is no greater love than when somebody gives their life for a friend. That’s what we’re seeing happening.”

“We should all be very much aware that they are our brothers and sisters,” Cardinal Gregory told the reporters. “What is happening to them is something we need to share, their resolution, and their desire for freedom and peace.”

With Ukrainian and Russian representatives scheduled to meet that day near the country’s border, Archbishop Gudziak was asked whether he had hope there could be a peaceful resolution to the crisis.

“Of course I have hope,” he said, “but I think we’ve heard many things said that have proven untrue. This invasion has been preceded by a whole Niagara Falls of lies.”

Archbishop Gudziak added, “I prayed today here in this church for the conversion of (Russian President) Vladimir Putin’s heart. Whether that’s going to happen, I don’t know, but that’s a precondition for peace.”

NEXT: Listening is an important part of pope’s ministry, panel says