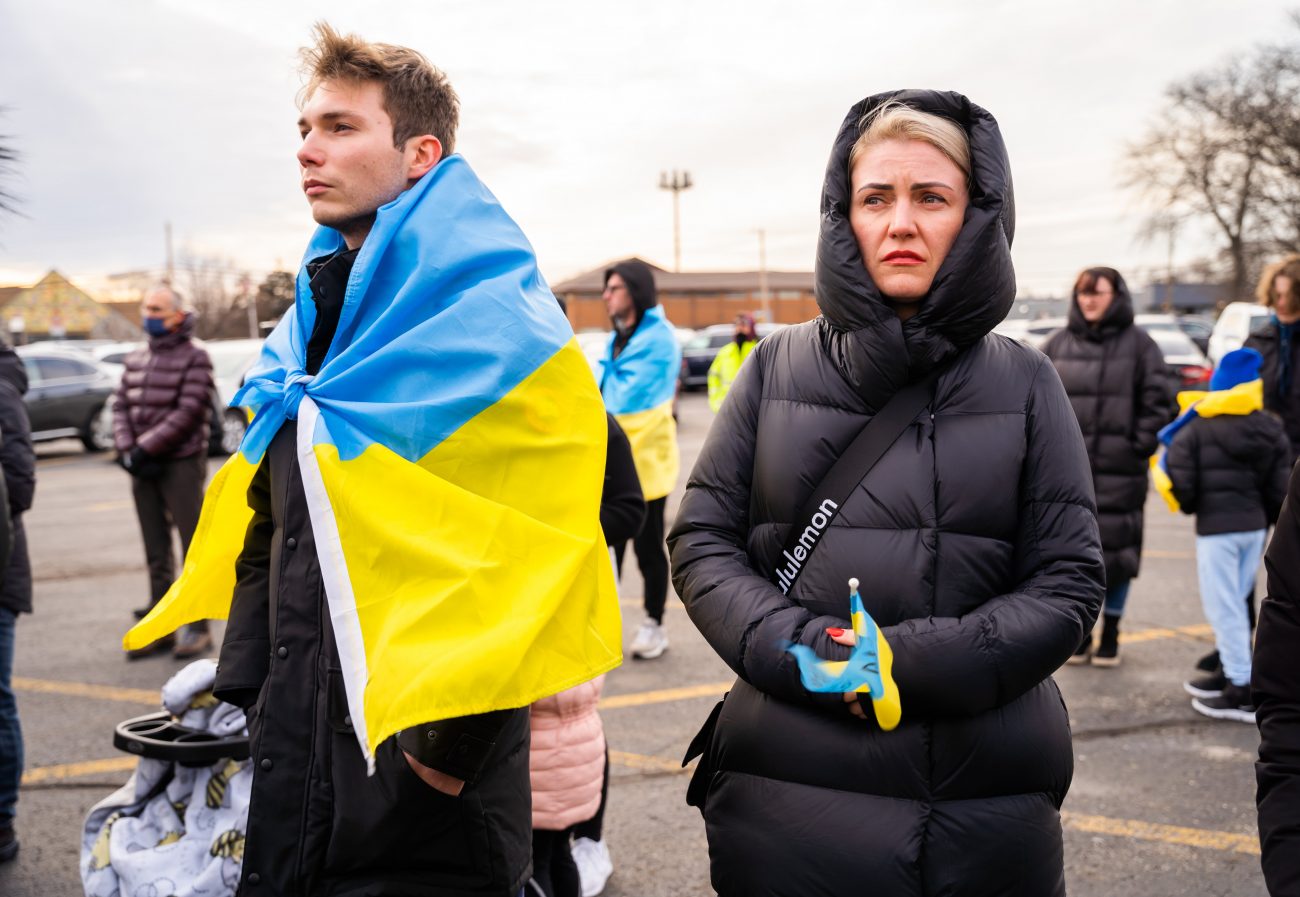 WARREN, Mich. (CNS) — Michigan’s Ukrainian American population, which numbers around 46,000, has reacted to Russia’s invasion of Ukraine with a mixture of disbelief, fear and sorrow.

“All of our hearts are breaking. I have no words, I don’t know how to express myself; it is just sadness, sorrow, anger,” Vera Murha told Detroit Catholic, the online news outlet of the Detroit Archdiocese.

“My parents went through this many years ago (during World War II), and for us to be going through now is unimaginable,” she said.

Murha was among Ukrainian Americans who joined other community members at St. Josephat Ukrainian Catholic Church in Warren the evening of Feb. 24 for an emergency rally, anxious about their family and friends and doing their part to spread awareness about the suffering taking place at home.

On March 1, Russian troops continued to pound Kharkiv, Ukraine’s second-largest city, and a 40-mile column of Russian tanks and vehicles was closing in on Kyiv, the capital.

Like many others present at the rally in Warren, Murha has family still living in Ukraine, with whom she spoke earlier in the day. She said they were in Kyiv, awaiting evacuation.

“I want to say that we need to pray for them, but they need more than prayers right now; they need financial help. They need all of our support. They need to know that we are behind them,” Murha said. 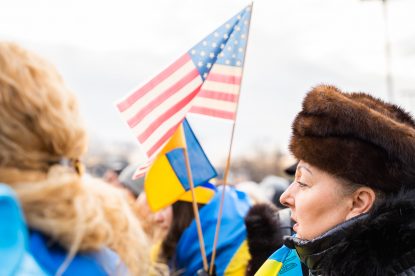 Murha not only can’t imagine what her parents would think, but, she said, gesturing to the crowd, many young Ukrainian children are now being exposed to the unthinkable.

Bearing the Ukrainian colors of blue and yellow, holding signs of protest and calling for peace, local political and faith leaders led the rally, standing outside in the freezing cold.

Speaking from a podium were U.S. Rep. Andy Levin, a Democrat who represents Michigan’s 9th Congressional District and serves on the House Foreign Affairs Committee, Warren Mayor Jim Fouts and members of the Ukrainian American community.

They expressed their support for Ukraine and their disdain for the invasion and shared stories of their own family heritage, often addressing the crowd in Ukrainian.

“(Russian President Vladimir Putin is) overrunning that country, which is a sovereign nation; it is a people with their language, their own culture, their own history,” Levin said. “This is the biggest land invasion since World War II.”

“My message to our beautiful Ukrainian American community here is that we are united, we stand with you all,” he said, “and our allies will put a vice grip of sanctions on the Russian economy and will fight to do what it takes to restore the full territorial integrity of Ukraine.”

The last-minute event was organized by the Ukrainian-American Crisis Response Team in Detroit, a grassroots group of Ukrainian Americans formed to respond to escalating crises in Ukraine in recent years. The group also helped organize relief efforts after the Russian annexation of Crimea in 2014.

Romana Petryshyn attended the rally with her three young children. Petryshyn was born and raised in the western Ukrainian city of Ivano-Frankivsk.

She told Detroit Catholic the local airport had been bombed and her grandparents and her husband’s entire extended family were still there, scared and with packed bags.

“My oldest one is almost 7, so he understands now. He asked questions about Putin and about what’s going on,” Petryshyn said. “We talk about Russian aggression and how it has been a thing for years, for centuries. So he knows where this is coming from.

“That’s the reason we came here today with the kids; we know they are young, but we are leading by example. We have to support our people back home and everyone here.”

Older Ukrainians told Detroit Catholic it is unfathomable to witness the same tragedy their parents suffered — and escaped from — decades ago.

Janet Tymczenko-Zuyus, who was born in Germany following World War II, said her father had suffered under both communism and the threat of Nazi Germany.

As a 5-year-old, he watched his own father shot in the head by the Soviets for being part of the resistance. As a young man, he was made to leave his university in Kyiv to serve as a Soviet soldier and was eventually captured by the Germans. He survived and managed to escape, eventually ending up in a displaced person’s camp, where he met Tymczenko-Zuyus’ mother.

Tymczenko-Zuyus said her father, who suffered from PTSD for his entire life, would be heartbroken.

“The only reason I am glad that my parents are not here is because of what is going on here right now,” Tymczenko-Zuyus said. “They would just die all over again, it would be too painful for them.”

Tymczenko-Zuyus said her own heart breaks — Ukrainians have been through hell before, she said.

“Ukrainians have suffered, and are still now, and all they want is to be free people and live in democracy,” she said.

Alongside the many Ukrainian Americans were supporters from other East European countries. Polish American Samantha Marecki said her own country has suffered, and she has great empathy as she watches Ukraine come under attack.

Young people such as herself have been instrumental in spreading awareness, particularly through social media platforms like Instagram and TikTok, she said.

“Using social media is a great way to allow other people to get educated and learn what is going on,” Marecki said. “(Also), call Congress, call anyone who is in a position of power that you think will help. Every word you say matters.”

Even several Russians were present at the rally, speechless at the destruction and evil coming from their home country.

“My paternal grandfather is from Ukraine, but I am a Russian citizen and I have lived for 20 years in the United States. I absolutely feel speechless about what is happening,” Olga Grushko tearfully told Detroit Catholic. “Ukraine has the full support of those Russians who are pro-democracy. There are a lot of people who sympathize who don’t want Putin in power, who want him out and think he is destroying Russia.”

Grushko said that while there have been protests among Russians, many Russians who speak out in their home country have been silenced or arrested.

News reports said police in Russia have arrested more than 2,000 anti-war protesters across the country.

“My heart goes to those (in Ukraine),” Grushko said. “I have been following Ukraine politics a little bit, and I felt so proud because they came from the same background of the Soviet Union, and they have been building their democracy.”

“I just feel proud, and I know they have something to fight for,” she added. “I believe that they have what it takes to fight for their freedom.”

Patti is a news reporter on the staff of Detroit Catholic, the online news outlet of the Archdiocese of Detroit. 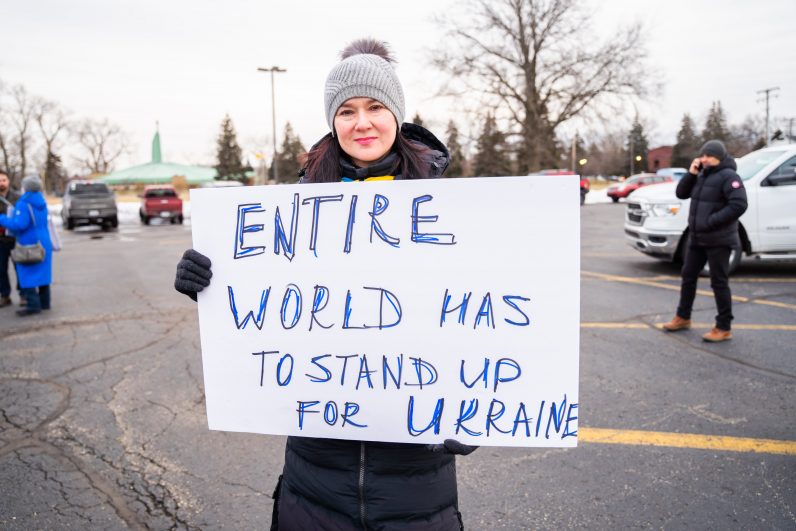 PREVIOUS: Senate rejection of abortion bill comes as relief for US bishops

NEXT: Prayers urged for U.S. troops, families in Europe