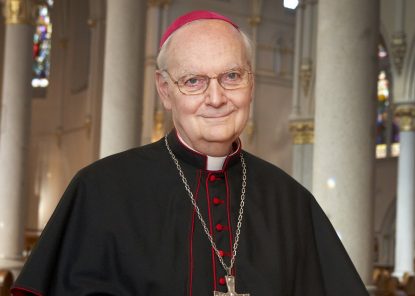 ERIE, Pa. (CNS) — During his 22-year tenure as the Diocese of Erie’s shepherd, the late Bishop Donald W. Trautman “gave himself totally to his role as bishop,” Bishop Lawrence T. Persico said of his predecessor.

“He wore many hats: pastor, administrator, professor, rector, auxiliary bishop and finally, bishop. He had a full life of service to the church,” remarked Bishop Persico, who in 2012 succeeded Bishop Trautman upon his retirement. “He was deeply committed to the pastoral care of the priests of his diocese as well as the people.”

Bishop Trautman died late Feb. 26 at age 85, and Bishop Persico presided over his March 7 funeral Mass at St. Peter Cathedral in Erie. Following the Mass, Bishop Trautman was interred in the cathedral’s crypt.

Donald Walter Trautman was born June 24, 1936, in Buffalo, New York. He studied at Our Lady of the Angels Seminary at Niagara University in Niagara Falls, New York, and then at the University of Innsbruck in Austria, where he earned a licentiate in theology in 1962.

At Innsbruck, he was a student of famed Jesuit theologian Karl Rahner and noted liturgist Josef Jungmann.

Ordained a priest of the Diocese of Buffalo April 7, 1962, then-Father Trautman pursued higher studies in biblical languages at The Catholic University of America in Washington and continued his postgraduate work at the Pontifical Biblical Institute in Rome, where he received his licentiate degree in Scripture.

He also earned a doctorate in theology from St. Thomas Aquinas University in Rome.

During the Second Vatican Council (1962-1965), he was a junior staff member. He once recalled his was a “lowly” job of distributing documents, arranging the height of a microphone before bishops addressed their peers and doing translations. But he called it the “opportunity of a lifetime.”

Over the years in talking about Vatican II, he would urge Catholics not to “quench the Spirit” that the council established. “The documents of Vatican II must continue to breathe new life into the church. … The seeds of life planted by the council must grow and achieve full maturity,” he said.

Before his appointment as an auxiliary bishop of Buffalo March 5, 1985, he taught Scripture and doctrine at St. John Vianney Seminary, the diocese’s former major seminary in East Aurora, New York, and served in parish posts and as secretary to the bishop, chancellor and vicar general of the diocese.

Bishop Persico noted that many of Bishop Trautman’s students “still remember him from those days” when he taught Scripture. “He was a great teacher,” he said.

St. John Paul II named him Erie’s ninth bishop June 2, 1990. In that role, Bishop Trautman was a frequent voice at the U.S. bishops’ meetings on topics that included vocations to the priesthood, liturgy, marriage and family life and other issues.

Bishop Trautman was awarded several honorary doctorates from colleges and universities during his lifetime.

The University of Notre Dame’s Center of Pastoral Liturgy honored him with the Michael Mathis Award, its highest honor bestowed for outstanding contributions to liturgy. St. John’s University in New York also honored Bishop Trautman with its Gold Medal.

The Federation of Diocesan Liturgical Commissions’ annual Msgr. Frederick R. McManus Award was presented to Bishop Trautman in 2003. He wrote and spoke extensively on liturgy and Scripture.

Upon his retirement, Bishop Trautman resided at St. Mary’s at Asbury Ridge in Erie, and for many years remained active as a writer, lecturer and retreat master.

“It’s easy to look at a life from today’s perspective rather than in its historical context,” Bishop Persico said. “All of us could have done better, myself included. Knowing Bishop Trautman, he did what he thought was the best he could do for the good of the people and the church.”

In 2018, a Pennsylvania grand jury issued a report chronicling abuse allegations against more than 300 priests and other church workers over a 70-year period, starting in 1947, in six of the state’s eight dioceses.

The Erie Diocese was one of the dioceses included in the report, which accused Bishop Trautman of mishandling claims of sex abuse against priests.

Attorney General Josh Shapiro singled out the bishop, accusing him of covering up the case of one particular priest by not “aggressively pursuing his removal.”

Bishop Trautman said in a statement at the time that there was “simply no pattern or practice of putting the church’s image or a priest’s reputation above the protection of children. The many victims whom I personally counseled will attest to this. I stand on my record.”

“Unfortunately, the grand jury report does not fully or accurately discuss my record as bishop for 22 years in dealing with clergy sexual abuse,” he said.

In 2019, veteran journalist Peter Steinfels spoke to Catholic News Service about the review he did of the grand jury report.

To better understand the church’s response to clergy abuse, Steinfels chose at random to review the details outlined in the report related to the Diocese of Erie.

He determined that Bishop Michael J. Murphy, who served 1982-1990, and his successor, Bishop Trautman, did not overlook abuse allegations or ignore the needs of abuse survivors to the extent charged by the grand jury.

“I found that since Bishop Murphy and particularly since 1990 under Bishop Trautman, there were probably some errors of judgment” but said his own review of these details “not only contradicted the grand jury’s sweeping report, it contradicted the existing narrative about this,” Steinfels told CNS.

After about a year as the head of the Erie Diocese, Bishop Trautman told the Erie Times-News daily newspaper that he would never have expected his vocation as a priest to lead to overseeing a diocese.

“What I always wanted to be was a humble country parish priest,” he said. “I never was.”

Years later he said he would put about 30,000 miles on his car every year, traveling the 13-county diocese in northwestern Pennsylvania.

“My heart and soul are with the people,” he told the Erie daily in a 2009 interview.

In addition to his parents, Bishop Trautman was preceded in death by his brother, Eugene Trautman, and his sister, Carol Trautman. Survivors include a niece, Catherine Trautman, and a nephew, Mark Trautman, both of Buffalo.

NEXT: Archbishop Gudziak: ‘Morally, Ukraine has won this war’