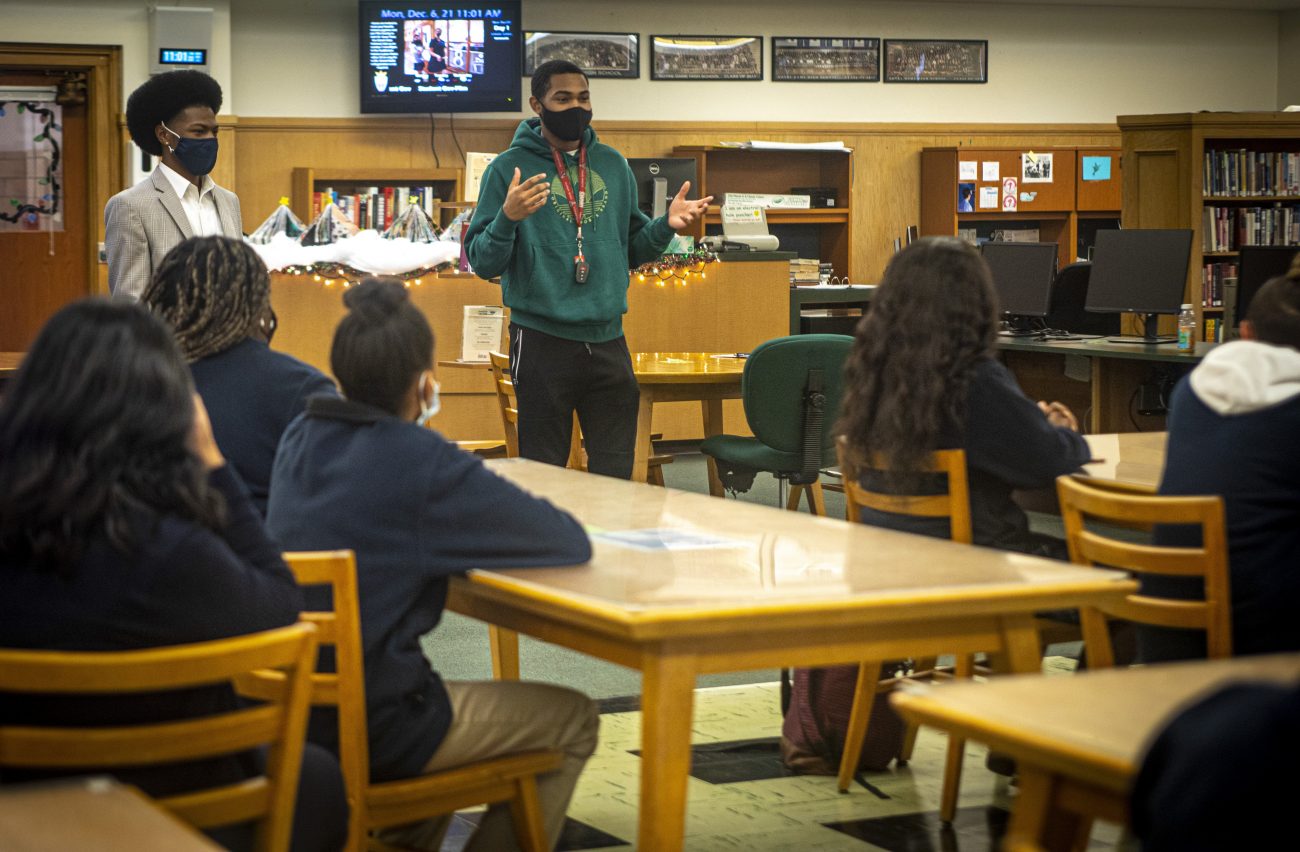 Notre Dame High School alumni Jahmai Person, left, and Darius McKay speak to current students at the Lawrenceville, N.J., Catholic school Dec. 6, 2021, about the evolution of racial healing on campus. At the gathering in the library were members of the school's Shades Club, a group that works to promote racial harmony on campus and in the community. (CNS photo/Chaz Muth)

The racial tension felt in communities across the country during the 2016 U.S. presidential election also showed its face in the 65-year-old high school, founded by the Sisters of Mercy, on a tree-lined street in central New Jersey.

Some of the Black students at the predominantly white high school said they felt this tension more than ever before. They felt harassed and scrutinized, outside of school but also in the hallways, cafeteria and classrooms.

(Also in this first of a series on “Church and Race,” watch a video below and listen to a podcast here.)

And when members of the school’s African American club met one day that fall to talk about this — joined by the school’s principal and a faculty moderator in a religion classroom — they didn’t hold back. They opened up about racial comments and names they’d heard, offensive messages they’d seen and the barrage of discrimination they felt — intentional or not.

“We had a long talk about it” is how Jahmai Person, a 2017 Notre Dame graduate, put it. And when they were done, it turned out that they didn’t just say that it felt good to talk about it and move on. Instead, their conversation led to something that would have a ripple effect still felt today on the campus.

Liz Ivins, the school principal at the time, urged the students to take what they had talked about out of the classroom. “It had to grow,” she told them, meaning they should bring their concerns directly to the entire school faculty.

It sounded daunting to them, but it also fit right in with what they had wanted: to be heard.

A few weeks later, about 12 members of the group joined hands in a circle in the school’s hallway and prayed together before joining the school’s faculty at the start of their monthly meeting.

Then they sat on stools in a half circle at the front of the school library describing to about 100 white faculty members — sitting at wooden tables in front of them — what their experience was like as students of color at the school.

Person, the first to speak, said it was “really delicate,” but he also knew it was a unique platform. They had the stage and the teachers were listening. 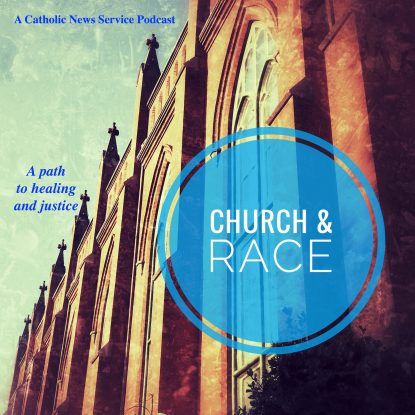 Episodes for the 2022 Catholic News Service podcast series “Church and Race” can be heard on Apple Podcasts, iHeart Radio and other podcasting platforms. It can also be found on CatholicNews.com/podcasts (CNS illustration/Chaz Muth and Carol Zimmermann)

When they finished, several teachers hugged them and many said they had no idea what the students had been going through. The students — who had been a little nervous about how this would go — did a collective exhale and hugged each other before having pizza together in the religion classroom where they had their club meetings.

A few months later, the students changed the name of the African American Club to the Shades Club to broaden its focus and embrace a more diverse membership of students from all ethnic backgrounds and white students as well.

Shades students also began taking leadership at the school by planning and organizing a charity fundraiser called Hoops for Hope, that became an annual event.

They continued to meet with each other to discuss challenges, hear guest speakers and plan annual retreats and liturgies but something else was also happening on a broader scale, showing them the school leadership had their back.

Ellieen Ingbritsen, who had taught at Notre Dame for 25 years, was hired for the new position. Known by students as “Dr. Ing,” she told Catholic News Service that what the Shades Club did with their initial speaking up was a catalyst for school action.

An incident at the school later, when a racial word was written in a student bathroom, also highlighted that something wasn’t right and something needed to be done.

“This was an opportunity” to change things, Ingbritsen said. “And sometimes when you listen to God’s voice, it’s not a gentle call. Sometimes it’s an alert. And that was an alert.”

Ingbritsen, who recalls being one of the few Black students at the Catholic school she attended, said being alert goes hand in hand with action and not one-time action either, but ongoing.

“We have to be aware. We have to be prophetic,” she told CNS. “We can’t just hide behind the fact that we started. We’ve got to continue to work the work of justice.”

Eileen Marx, theology teacher at Notre Dame and the faculty moderator of the Shades Club from 2015 to 2021, similarly credits the students for getting the school moving in new direction by shining a light on injustices they were seeing.

She said their brave discussion that day in the library provided “an extraordinary model of how to have respectful civil discourse on difficult topics.”

And last December, just over five years from that presentation, a few of those Notre Dame graduates and current students were back in that same library encouraging members of the current Shades group sitting at the tables.

Seniors in the club now were eighth graders when the group formed and they have faced their own significant challenges no one would have imagined back in 2016. With the pandemic, their school initially became virtual, then became hybrid the following academic year, with students attending different weeks, before it reopened fully in-person this school year.

Also, just two months after the school campus closed, a national reckoning of racism started following the death of George Floyd. People across the country started having conversations not unlike those being raised at Notre Dame.

The current Shades group, like the original members, are willing to address injustices they see around them and to get into conversations that aren’t always easy, but they also face the very different challenge of just reconnecting with each other after the pandemic had separated them.

“A lot of us felt isolated and got used to being alone,” said Jaylen Bajnath, a senior.

But the community aspect of Shades also draws many of the current members such as Mia Abousabe, also a senior. “As a Muslim student in a Catholic school,” she said, “I wasn’t expecting the community I came into.”

The current group gets what the students did in 2016 and they also feel a strong sense of responsibility to keep that momentum going, wanting underclassmen to continue their involvement so the school doesn’t lose ground with its efforts to be inclusive.

“It really is our responsibility to show them the space that was created years ago so they can continue it,” said senior Havelin Autry.

Bajnath agreed, saying: “Someone needs to take the torch or we’ll be back where we started.”