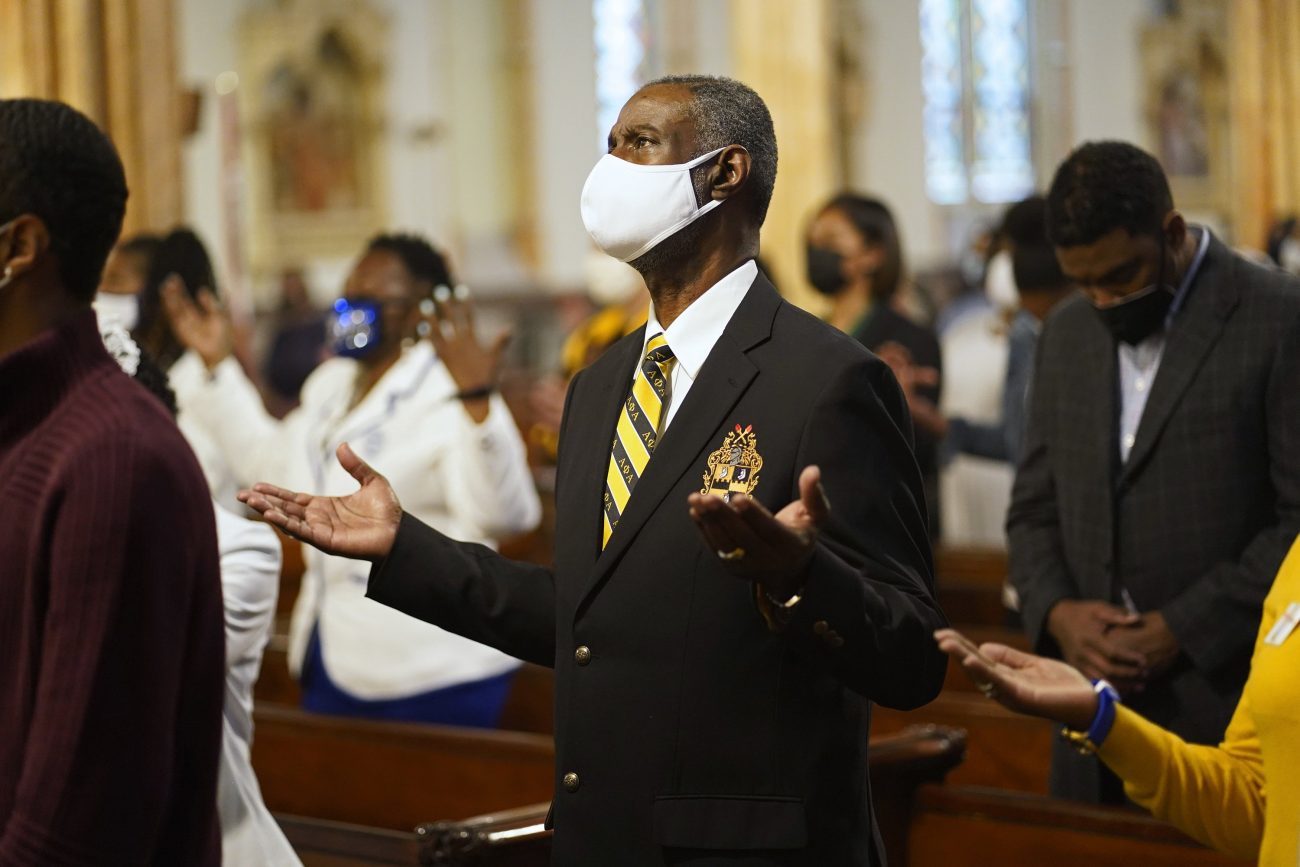 A man prays during a Mass marking Black Catholic History Month Nov. 21, 2021, at Our Lady of Victory Church in the Bedford-Stuyvesant section of Brooklyn, N.Y. The liturgy was co-sponsored by the Diocese of Brooklyn and the Archdiocese of New York. (CNS photo/Gregory A. Shemitz)

WASHINGTON (CNS) — A Pew Research Center study has found that only one-fourth of U.S. Black Catholics worship in majority-Black parishes.

“That compares with 80% of white Catholic churchgoers who worship where most attendees are white,” said the study, issued March 15. Among Hispanic Catholics, 67% worship in majority-Hispanic parishes.

The data was published in a report, “Black Catholics in America.”

“And Black (40%) and Hispanic Catholics (42%) are more likely than white Catholics (18%) to say it is essential that churches teach practical job and life skills, and that they offer sermons that address political topics such as immigration and race relations,” it said.

Black Catholics, more than their white or Hispanic counterparts, said their parish should offer spiritual comfort — Hispanics tied with Blacks on this issue — offer a sense of community or fellowship, offer moral guidance, help the needy with bills, housing or food, and offer sermons that address political topics, such as immigration or race relations. The percentage of Black Catholics topped even that of Black Protestants in the last two categories.

Black Catholics are twice as likely — 66% compared to 33% of their white counterparts — “to say they attend services where other attendees often or sometimes call out ‘amen’ or other expressions of praise,” Pew reported.

“They are also more likely than white Catholic churchgoers to say their experiences at least sometimes include two practices often associated with a charismatic style of worship: speaking or praying in tongues (29% vs. 9%) and jumping, shouting and dancing spontaneously during the service (24% vs. 2%).

“At the same time,” the report added, “among churchgoers, Black Catholics are somewhat less likely than Hispanic Catholics to experience people calling out ‘amen’ and speaking in tongues at Mass, and they are much less likely than Black Protestants to say these things are typically present at their worship services.”

Black Catholics topped their white and Hispanic counterparts in saying they pray at least once a day, that religion is very important to them, that they rely a lot on prayer when making decisions, that they read Scripture outside of services at least once a week, and that they believe the Bible should be taken literally. They were one percentage point behind Hispanic Catholics s in saying they rely a lot on religious leaders when making decisions.

“Black Catholics in America” is a follow-up to a February 2021 Pew report, “Faith Among Black Americans,” which explored their beliefs and practices of 8,660 Black adults, including 562 Black Catholics, via phone, mail and online surveys conducted from November 2019 to June 2020.

“The survey was designed with a very large sample to allow researchers to dig into subgroups, such as Black Catholics, that are too small to be analyzed in most national surveys,” the report said.

Besheer Mohamed, a senior researcher at Pew, told Catholic News Service in a March 14 phone interview that “Faith Among Black Americans” focused on differences among Black worshippers of various denominations, while “Black Catholics in America,” using responses generated in the same 2019-20 survey, examines the differences that exist among Black Catholics and their white and Hispanic counterparts.

Mohamed said the “great difference” between Black, white and Hispanic Catholics is that “Black Catholics are a bit more likely” than white Catholics in seeing opposing racism as “an essential part of being Christian.”

“They see that as part of their faith — more so than white Catholics or Hispanic Catholic,” he said. “They have a different sort of engagement in that way.”