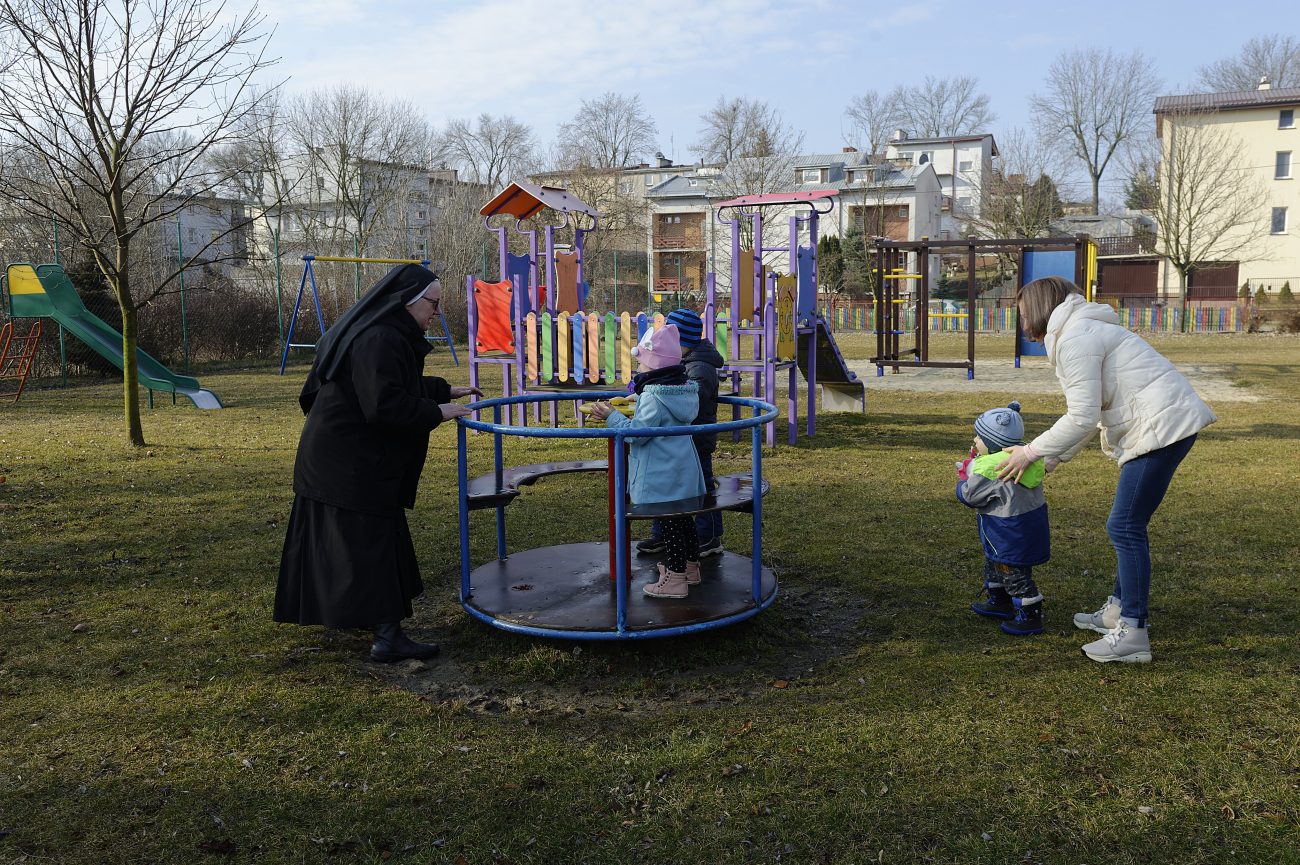 Sister Zuzanna plays with the children of Olga, a Ukrainian refugee, at a kindergarten run by the Missionary Sisters of the Holy Family in Lublin, Poland, March 17, 2022. Thousands of refugees from Ukraine have been assisted by and are living with communities of religious sisters in Poland. (CNS photo/Katarzyna Artymiak)

LUBLIN, Poland (CNS) — Olga and her youngest children are safe in Poland, but she is consumed with worry for her husband and oldest son, who are still in Ukraine.

And her heart breaks when the little ones ask questions, including about why Russia invaded Ukraine when so many Russians live in Ukraine and when so many of their families are intermarried.

Everything is difficult to explain to the children, Olga said. “The youngest (two) don’t notice so much, but the oldest asks when he will see his father. I tell him the truth. He asks why uncles shoot at his father. And ‘When daddy dies, will he come to us?'”

“I don’t know how to answer these questions and I want to cry,” she said.

Olga and her three children — Dima, 2, Natasha, 4, and Nazar, 6 — and her friend Alina and Alina’s 4-year-old son, Alexander, and 19-year-old daughter, Anna, found safe haven with the Missionary Sisters of the Holy Family in Lublin. The Ukrainian women asked that their real names not be used.

The Polish Conference of Major Superiors of Women said March 15 that an estimated 18,000 refugees from Ukraine were receiving spiritual, psychological, medical and material help at 924 convents in Poland and that close to 500 of those communities are sheltering almost 3,000 adults — mostly women — and more than 3,000 children.

Olga and Alina met at a prayer group near their homes in the Dnepropetrovsk Oblast (district) in southeastern Ukraine.

Like many Ukrainians, Olga said that they had been warned of Russia’s plan to invade, but “I tried not to accept it.”

On the third day of the war, Olga said, she knew they had to leave. In a hurry. “The way was tough. We didn’t drive at night. I was so absorbed that I didn’t eat or drink.” 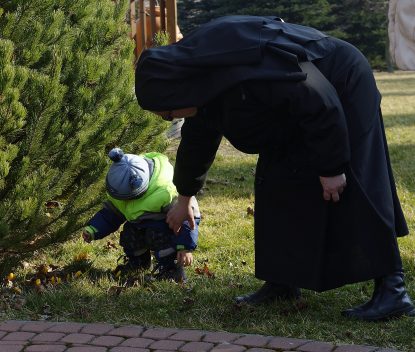 Sister Zuzanna plays with a young Ukrainian refugee child at a kindergarten run by the Missionary Sisters of the Holy Family in Lublin, Poland, March 17, 2022. Thousands of refugees from Ukraine have been assisted by and are living with communities of religious sisters in Poland. (CNS photo/Katarzyna Artymiak)

Olga took a light jacket for the trip because, she said, she did not want to carry anything heavy. Crossing the border into Poland, they walked the last mile. She carried Dima and held the two older children by the hand.

She said she had lost all sense of time and did not realize what day it was until she looked at the stamp in her passport.

Volunteers were waiting on the other side of the border and took her and the children to a Polish family in Korczowa for the night.

“After I laid my children down to sleep, I cried the whole night, giving thanks to God that we are safe. I was so exhausted that I had no strength to let my mother know that we were safe,” she said. “The next day a volunteer took us to Lublin.”

Alina said she had seen a message from Olga that they had to leave.

“At the church, I learned that there was a train from Zaporizhzhia,” she said, but it turned out to be full.

“The duty officer told us not to come and not to ask for any train, there will be no train. Finally, one to Uzhhorod arrived. Everybody swarmed to enter the train; one person fell,” she said. “A conductor came and said there is no room,” but “he let me in with the children. They stood the whole trip in the corridor.”

“The lights were off. The windows were closed. The route changed many times” due to Russian air strikes. Every stop “lengthened by hours,” she said. When they finally reached Lviv, she looked for a train to Poland.

“I found one to Przemysl,” she said, but “when they opened the train doors everybody ran and there was a crush. Alexander was blocked, so I shouted, and they let him come to me. I was afraid I would lose him.”

It took five hours for processing at the border, she said, then they went to Olkusz, to Krakow and finally to the Missionary Sisters of the Holy Family in Lublin. “They brought us warm hamburgers and hot tea,” she said.

In Lublin, the sisters run an integrated kindergarten where children with autism or partial deafness play and learn with other 4- to 6-year-olds.

“Kids here learn to be open and to accept everybody,” Sister Zuzanna said. “Now they have an opportunity to open up to another culture and language.”

Olga’s and Alina’s youngest children were going to school there by mid-March. And Olga started a job at a care center near the convent March 22.

When the war started, the sisters immediately decided to take in refugees. “We saw that so many people are arriving, and they are in need,” Sister Zuzanna said. “We reorganized rooms, we bought a new washing machine, kettle, clothes and toys.”

“We pray in our chapel every day for the end of the war,” she said, and “we already had the holy Mass for their husbands.”

NEXT: Russia and Ukraine, and all humanity, to be consecrated to Mary