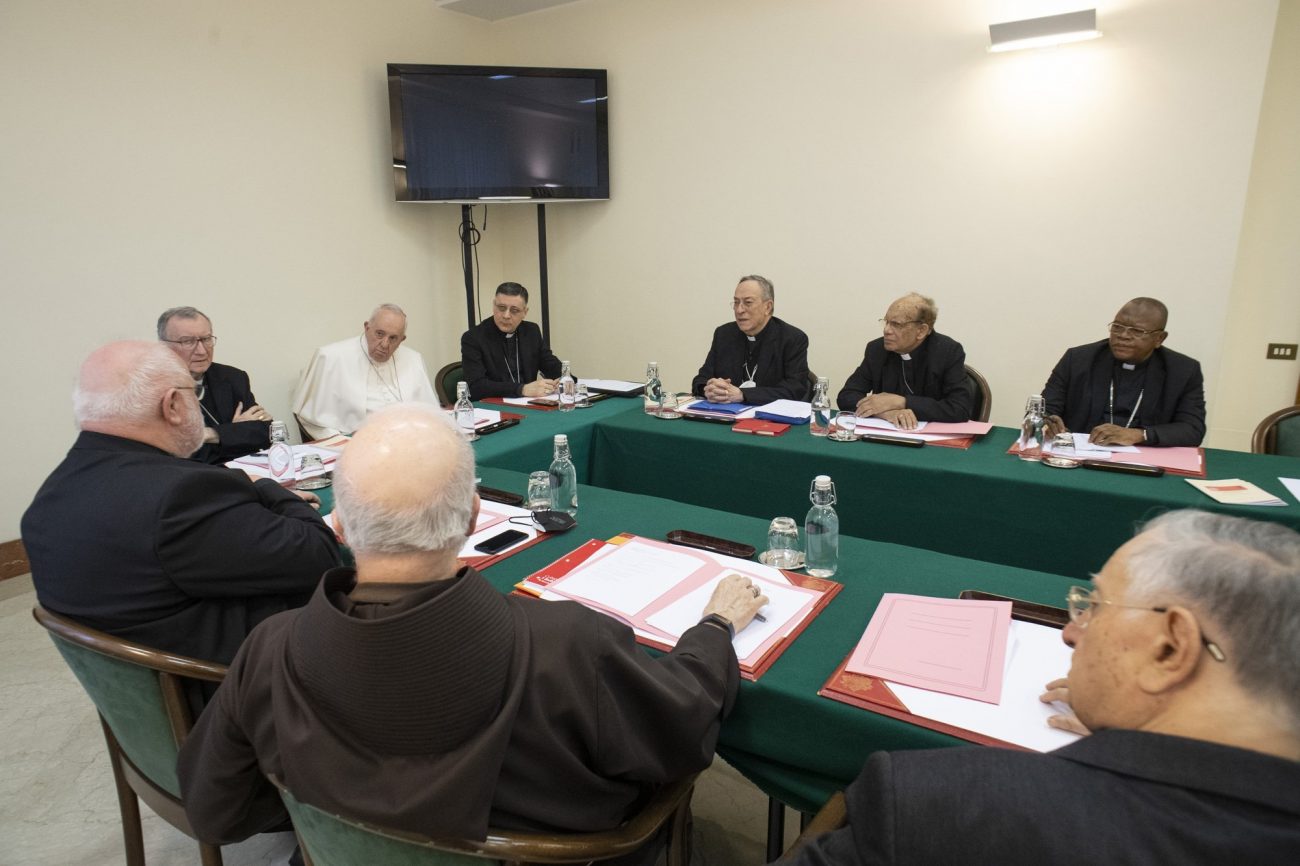 Pope Francis leads a meeting of his Council of Cardinals at the Vatican Feb. 21, 2022. On March 19, 2022, Pope Francis promulgated the long-awaited constitution reorganizing the Roman Curia. (CNS photo/Vatican Media)

“Praedicate Evangelium” (“Preach the Gospel”), which was published only in Italian by the Vatican March 19, will go into effect June 5, the feast of Pentecost.

Merging some congregations and pontifical councils and raising the status of others — particularly the charitable office of the papal almoner — Pope Francis said he hoped the constitution would ensure that the offices of the Vatican fulfill their mission in helping promote the church as a community of missionary disciples, sharing the Gospel and caring for all those in need.

Part of that effort, he wrote, requires including more laypeople in Curia leadership positions.

“This new apostolic constitution proposes to better harmonize the present exercise of the Curia’s service with the path of evangelization that the church, especially in this season, is living,” the pope wrote in the document.

In a similar way, until 1968, the popes were prefects of what became the Congregation for the Doctrine of the Faith.

“Pastor Bonus” began its description of the doctrinal congregation’s responsibility saying, “The proper duty of the Congregation for the Doctrine of the Faith is to promote and safeguard the doctrine on faith and morals in the whole Catholic world; so, it has competence in things that touch this matter in any way.”

The new constitution begins its description by saying, “The task of the Dicastery for the Doctrine of the Faith is to assist the Roman pontiff and the bishops-eparchs in the proclamation of the Gospel throughout the world, promoting and safeguarding the integrity of Catholic doctrine on faith and morals, drawing on the deposit of faith and also seeking an ever deeper understanding of it in the face of new questions.”

The new constitution does away with the previous distinctions between “congregations” and “pontifical councils,” referring to all of them simply as “dicasteries.”

“Praedicate Evangelium” replaces St. John Paul II’s 1988 constitution, “Pastor Bonus,” but, unlike it, does not reserve the leadership of certain offices only to cardinals and bishops, although the individual statutes of those offices may make such a specification.

However, Pope Francis wrote in the document that offices that have “their own statutes and laws shall observe them only insofar as they are not opposed to the present apostolic constitution and shall propose their adaptation for the approval of the Roman pontiff as soon as possible.”

Insisting that every Christian is “a missionary disciple,” the constitution said, the reform of the Curia also needed to “provide for the involvement of laymen and women, including in roles of governance and responsibility.”

The participation of laypeople “is indispensable, because they cooperate for the good of the whole church and, because of their family life, their knowledge of social realities and their faith that leads them to discover God’s paths in the world, they can make valid contributions, especially when it comes to the promotion of the family and respect for the values of life and creation, the Gospel as leaven for temporal realities and the discernment of the signs of the times.”

Describing the personnel of the offices, the constitution said the leadership, “as far as possible, shall come from the different regions of the world so that the Roman Curia may reflect the universality of the church.”

They can be clergy, religious or laypeople “who are distinguished by appropriate experience, knowledge confirmed by suitable qualifications, virtue and prudence. They should be chosen according to objective and transparent criteria and have an adequate number of years of experience in pastoral activities.”

Pope Francis described the reform of the Curia as part of the “missionary conversion” of the church, a renewal movement aimed at making it reflect more “the image of Christ’s own mission of love.”

He also linked it to the ongoing process of promoting “synodality,” a sense of the shared responsibility of all baptized Catholics for the life and mission of the church.

True communion among all Catholics, he said, “gives the church the face of synodality; a church, that is, of mutual listening in which each one has something to learn: the faithful people, the College of Bishops (and) the bishop of Rome listening to the other, and all listening to the Holy Spirit, the spirit of truth.”

Addressing one of the main concerns expressed by bishops around the world in the past, the constitution said, “The Roman Curia does not stand between the pope and the bishops, but rather places itself at the service of both in ways that are proper to the nature of each.”

Pope Francis wrote that in reorganizing the Curia, he wanted to promote a “healthy decentralization” that would, at the same time, promote “co-responsibility” and communion with the bishops and among the Vatican offices.

The Curia, he said, should support individual bishops in their mission as pastors as well as the work of bishops’ conferences and synods of Eastern Catholic bishops.

Because “the face of Christ” is reflected in the faces of his disciples, the document said, members of the Roman Curia should be “distinguished by their spiritual life, good pastoral experience, sobriety of life and love for the poor, spirit of communion and service, competence in the matters entrusted to them, and the ability to discern the signs of the times.”

In the ordering of the Roman Curia, the Secretariat of State maintains its position of leadership and coordination, but the new Dicastery for Evangelization is placed above the Dicastery for the Doctrine of the Faith.

The description of the organization of the doctrinal dicastery includes changes announced by Pope Francis in February, creating separate doctrinal and disciplinary sections, reflecting the growing importance of the office that investigates allegations of clerical sexual abuse and the abuse of office by bishops or religious superiors.

The constitution places the Pontifical Commission for the Protection of Minors “within the dicastery” and says “its task is to provide the Roman pontiff with advice and consultancy and to propose the most appropriate initiatives for the protection of minors and vulnerable people.

Cardinal Seán P. O’Malley of Boston, president of the commission and a member of the Council of Cardinals that drafted the constitution, said, “For the first time, Pope Francis has made safeguarding and the protection of minors a fundamental part of the structure of the church’s central government.”

“Linking the commission more closely with the work of the new Dicastery for the Doctrine of the Faith represents a significant move forward in upgrading the place and mandate of the commission, which can only lead to a stronger culture of safeguarding throughout the Curia and the entire church,” he said in a statement March 19. 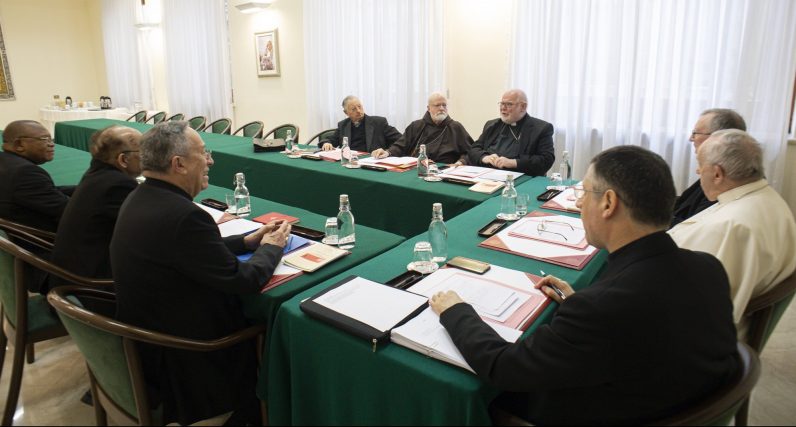 Pope Francis leads a meeting of his Council of Cardinals at the Vatican Feb. 21, 2022. On March 19, 2022, Pope Francis promulgated the long-awaited constitution reorganizing the Roman Curia. (CNS photo/Vatican Media)

NEXT: After frightening trip, Ukrainian families welcomed in Polish convents