Canadian Indigenous give pope moccasins, ask him to walk with them 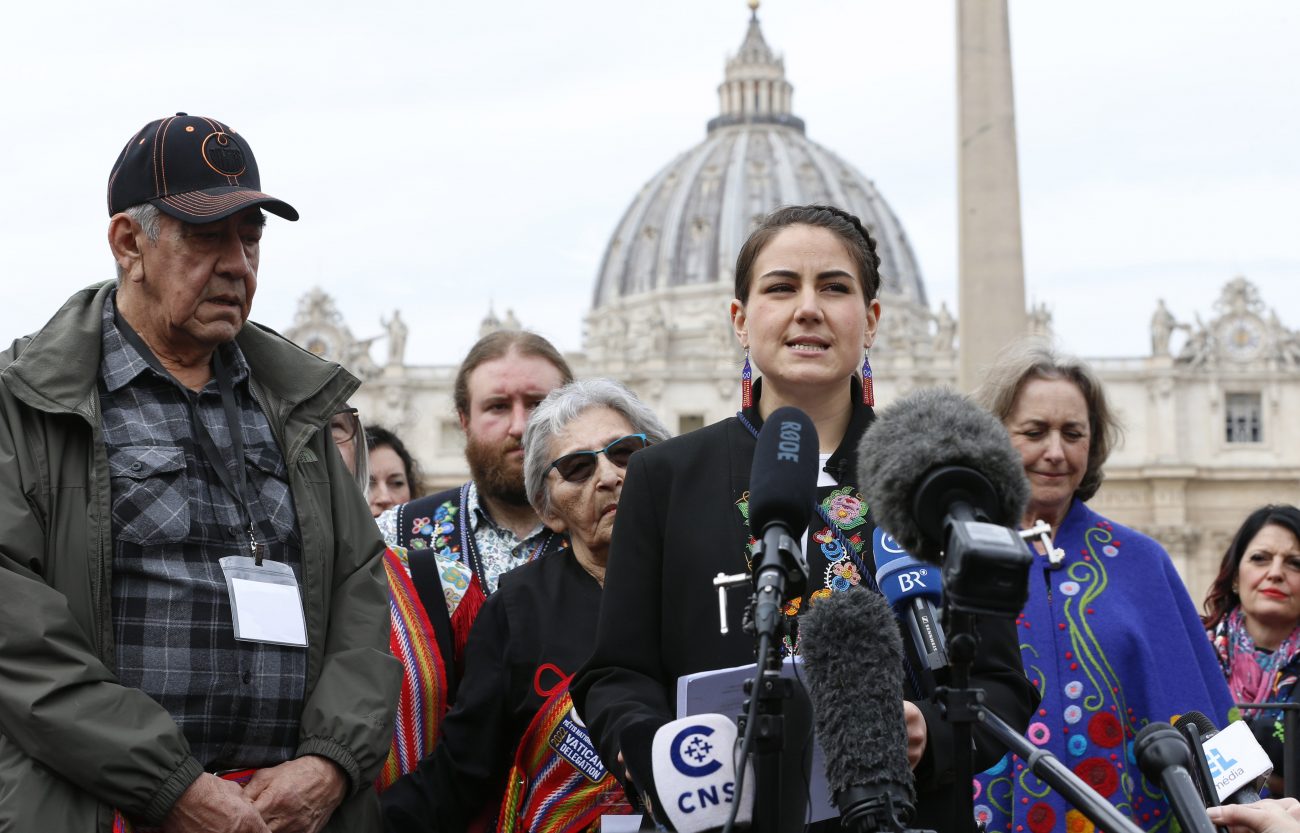 Cassidy Caron, president of the Métis National Council, is surrounded by other council delegates as she briefs journalists after meeting Pope Francis at the Vatican March 28, 2022. The pope is holding three meetings to listen to the experiences of representatives of Canada's Indigenous communities, experiences that include being sent as children to residential schools operated by Catholic dioceses and religious orders. (CNS photo/Paul Haring)

VATICAN CITY (CNS) — Members of the Métis National Council gave Pope Francis a set of beaded moccasins and asked him to walk with them on the path of truth, justice and healing of Canada’s Indigenous communities and their relationship with the Catholic Church, said Cassidy Caron, president of the council.

Led by two fiddlers, the delegates walked from under the colonnade of St. Peter’s Square to a prearranged spot where dozens of reporters waited to hear about their meeting March 28 with Pope Francis.

The delegates from the Métis National Council and the Inuit Tapiriit Kanatami had separate meetings with the pope March 28. The delegation from the Assembly of First Nations was scheduled to meet him March 31.

The delegations’ trip to Rome, accompanied by six Canadian bishops, was designed to give them an opportunity to explain to Pope Francis how the communities live and struggle today and how the Catholic Church and its institutions contributed to those struggles, especially by running residential schools where the Indigenous languages and cultural expressions were banned and where many students experienced abuse.

Before their meetings, leaders of all the groups said they want an apology from the pope for the Catholic Church’s role in running the schools. About 60 percent of the 139 schools across Canada were run by Catholic religious orders or dioceses. According to the government, which funded the schools, more than 150,000 First Nations, Métis and Inuit children were forced to attend the schools between the 1870s and 1997.

The groups want Pope Francis to go to Canada and publicly apologize there for the church’s treatment of Indigenous peoples and its collaboration with colonizers. The Vatican has said Pope Francis is willing to make the trip, although it has not said when.

The three groups together, along with family members and supporters, were to meet again with the pope April 1 to hear his response to what they had shared.

First Nations, Inuit and Métis also want “unfettered access” to the records of the church-run schools, said Caron, president of the Métis organization.

She led her community’s meeting with the pope wearing a jacket with traditional beading that had been given to her for the occasion.

She said three of the delegates, survivors of residential schools, shared their stories with the pope. They “did an incredible job of standing up and telling their truth. They were so brave and so courageous.”

“We invited Pope Francis and Catholics all around the world to join us, the Métis nation, on our pathway of truth, justice and healing, and we hope that in committing to us, committing to real action, that the church can finally begin its own pathway toward meaningful and lasting reconciliation,” Caron told reporters.

“The only words he spoke back to us in English … were ‘truth, justice and healing’ and I take that as a personal commitment,” she said. “So, he has personally committed to those three actions.”

Too many members of the community have already died “without ever having their truths heard and their pain acknowledged,” she said. The time to acknowledge what happened and to apologize is “long overdue, it is never too late to do the right thing.”

After Pope Francis had spent about an hour each with the Métis and Inuit delegations, the Vatican press office said, the pope had wanted to listen and “to create space for painful stories brought by the survivors.”

Natan Obed, president of the the Inuit Tapiriit Kanatami, told reporters later that the organization representing 65,000 Inuit in Canada asked Pope Francis for an apology, restitution for the church’s role in running the schools, and for assistance in getting Oblate Father Johannes Rivoire, who has been accused of child sexual abuse, to return to Canada to face charges. The priest apparently is in France.

Obed said he introduced the group to the pope by explaining that there are many Inuit who are practicing Catholics, who have a strong faith, which helps them be positive influences on their communities. But, “there also are many who are still struggling to have any sort of relationship with the Catholic Church because of the trauma that they themselves have experienced or the trauma that their loved ones have experienced.”

Martha Greig, a residential school survivor and one of the delegates, told reporters that while she is convinced forgiveness is an essential part of healing, many Inuit are not ready to hear that.

“But a genuine, heartfelt apology would be a first step” in helping survivors and their families move toward forgiveness and reconciliation, Greig said.

The children were taken from their families and put in the schools to learn “how to be a ‘white person,’ which we cannot be. We are Inuit.”

The delegation entered the papal library and lighted a qulliq, a traditional Inuit lamp. And at the end of the meeting, they recited the Lord’s Prayer in Inuktitut, their language, Obed said. They gave Pope Francis a seal skin liturgical stole and a rosary case, also made of seal skin.

Bishop Raymond Poisson of Saint-Jérôme, Quebec, president of the Canadian bishops’ conference, accompanied the delegations. He described the atmosphere as one of “mutual affection.”

Bishop William McGrattan of Calgary, Alberta, vice president of the bishops’ conference, told reporters that the pope jokingly told the Inuit that if he does go to Canada, he does not want to go to the Arctic in the winter.

“He does want to come,” the bishop said, “but he would like to come at a time when it’s not so cold.” 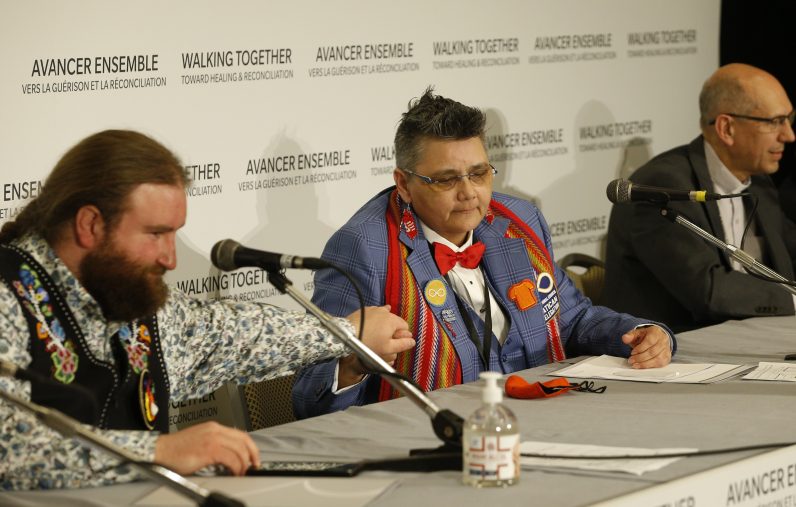 Mitchell Case, historian and educator with the Métis Nation of Ontario, clasps the hand of Pixie Wells, president of Valley Métis Association of Métis Nation in British Columbia, as Canadian Indigenous delegates from the Métis National Council hold a press conference in Rome after meeting Pope Francis at the Vatican March 28, 2022. Also pictured is Archbishop Donald J. Bolen of Regina, Saskatchewan. The pope is holding three meetings to listen to the experiences of representatives of Canada’s Indigenous communities, experiences that include being sent as children to residential schools operated by Catholic dioceses and religious orders. (CNS photo/Paul Haring)

NEXT: Patriarch pledges solidarity with Ukrainians during Warsaw visit