WARSAW, Poland (CNS) — Ecumenical Patriarch Bartholomew of Constantinople pledged solidarity with Ukrainians forced to flee their country and thanked neighboring Poland for showing “generosity, charity and hospitality” since the start of the Russian invasion.

“I am here to show solidarity and join in prayer with millions of refugees who’ve been displaced by this unjustifiable aggression and the violence unleashed by Russia against sovereign Ukraine,” the ecumenical patriarch said March 28 during a visit to the Polish capital.

He said his three-day visit, which came at the invitation of Polish President Andrzej Duda and Metropolitan Sawa of Warsaw, allowed him to “to meet and encourage all those displaying the essence of Christianity, which consists of loving neighbors and seeing Christ in each of them.”

The patriarch also said he hoped people worldwide would learn from the “true love and disinterested solidarity” shown by Poland, which has taken in 2.3 million Ukrainian refugees who have fled their homeland since the violence erupted.

Polish citizens, far from setting up refugee camps, he said, had “opened their homes” to “women and children, some orphaned and bereaved, as well as elderly people and even their accompanying pets.”

“All these refugees are under tremendous stress and trauma, marked by the past but also fearing for their future said the patriarch,” whose speech was carried by Poland’s Catholic Information Agency.

“They are exposed to the specter of hunger and homelessness, but also to exploitation and human trafficking, and they need support and words of comfort. In this huge crisis, Poland has turned out to be, both the country and its people, a model of generosity, charity and hospitality to all those in need,” he said.

The patriarch, recognized as “first among equals” by leaders of the world’s 15 main Orthodox churches, arrived in Warsaw March 27. He planned to sign a declaration Archbishop Stanislaw Gadecki of Poznan, president of the Polish bishops’ conference, after a March 29 prayer service for peace. 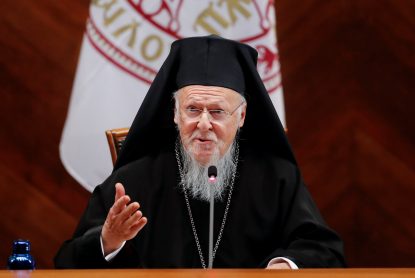 Ecumenical Patriarch Bartholomew of Constantinople attends an interfaith meeting at the Pontifical Lateran University in Rome Oct. 7, 2021. On a state visit to Poland March 27-28, 2022, the patriarch pledged solidarity with Ukrainians and praised the “generosity, mercy and hospitality” of Poles for taking in 2.3 million war refugees from in one month. (CNS photo/Remo Casilli, Reuters)

In January 2019, Ecumenical Patriarch Bartholomew signed a decree recognizing an independent church in Ukraine despite strong criticism from the Russian Orthodox Church, which sees Ukraine as part of its church territory. Patriarch Kirill, in protest, excommunicated Patriarch Bartholomew and severed communion with him and his followers.

The patriarch has repeatedly condemned Russia’s invasion. He urged an end to the “heinous war and all the accumulated calamities” in a homily in Istanbul March 27 before traveling to Poland.

Poland’s Orthodox church, headed since 1998 by Metropolitan Sawa, has 504,000 members and 486 clergy, according to 2021 Polish government data. It is the country’s largest non-Catholic minority.

Meeting Ukrainian refugees March 28 in St. John Climacus Orthodox Church in Warsaw, Patriarch Bartholomew said he had praised the stance of Ukrainian President Volodymyr Zelenskyy during a Feb. 27 telephone conversation as “a great inspiration for the entire Ukrainian nation in its struggle to maintain independence.”

“Every day, I watch the terrible images of this war on television, sympathizing with the Ukrainian nation and admiring its heroic struggle and sacrifice,” the patriarch added.

Duda said that Poles, “as believing Catholics,” were grateful to the Orthodox leader for “spiritual support” and for “consistently and calmly indicating who are the victims in this terrible armed conflict.”

In a statement, the Polish bishops’ conference said Archbishop Gadecki met the Pope in a private audience March 28 at the Vatican and discussed the “panorama of actions” taken by Polish Catholic charities, parishes and religious orders to help Ukrainian refugees. He also outlined his planned meeting with the patriarch March 29. 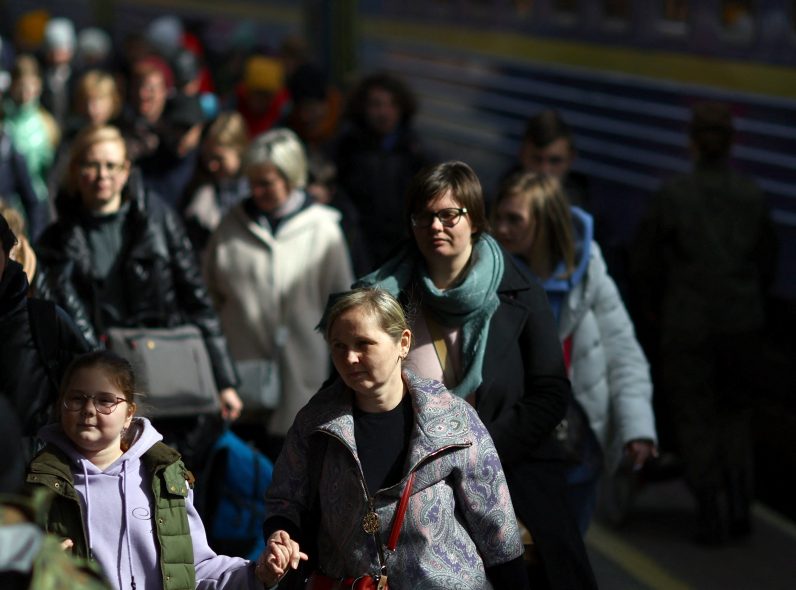 Ukrainian refugees disembark a train in Przemysl, Poland, March 27, 2022, after fleeing the Russian war in their homeland. On a state visit to Poland March 27-28, 2022, Ecumenical Patriarch Bartholomew of Constantinople pledged solidarity with Ukrainians and praised the “generosity, mercy and hospitality” of Poles for taking in 2.3 million war refugees in one month. (CNS photo/Hannah McKay, Reuters)

PREVIOUS: Canadian Indigenous give pope moccasins, ask him to walk with them

NEXT: Ukrainian archbishop tearfully recounts the horrors, heroism of war