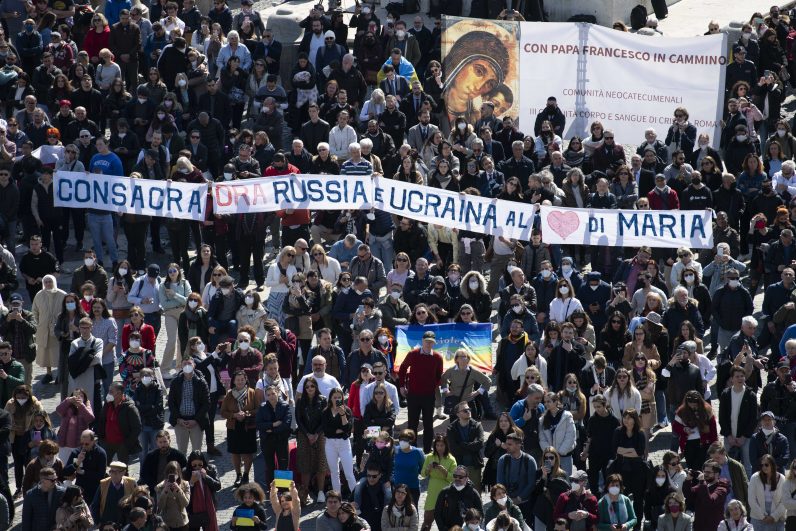 A sign in St. Peter’s Square calls for the consecration of Russia and Ukraine to Mary, during Pope Francis’ Angelus at the Vatican March 13, 2022. Appealing again for peace in Ukraine, Pope Francis said those who support violence profane the name of God. (CNS photo/Vatican Media)

VATICAN CITY (CNS) — Appealing again for an end to the war in Ukraine, Pope Francis said those who invoke God to promote or justify violence “profane his name.”

“In the name of God, I ask: Stop this massacre,” the pope said March 13 at the end of his Sunday Angelus address.

With thousands of people gathered under the bright sunshine of a Roman spring to pray the midday Marian prayer, Pope Francis turned their attention to Mariupol, Ukraine, a city named in honor of Mary; it has been besieged by Russian troops for two weeks.

The city, he said, “has become a martyred city of the heart-wrenching war that is destroying Ukraine.”

“Before the barbarity of the killing of children, of innocents and unarmed civilians, there are no strategic reasons that hold up,” the pope said. The only thing to do is “to stop the unacceptable armed aggression before it reduces the cities to cemeteries.”

“With pain in my heart, I unite my voice to that of ordinary people who implore an end to the war,” he said. “In the name of God, listen to the cry of those who are suffering and stop the bombings and attacks.”

Negotiations to end the war must begin seriously, he said, and the humanitarian corridors agreed upon to evacuate civilians and to bring basic necessities to people in besieged towns must be respected and secure.

With the U.N. Refugee Agency reporting March 13 that almost 2.7 million refugees had fled Ukraine since Feb. 24, Pope Francis thanked all the individuals and agencies in the neighboring countries who have welcomed them, and he encouraged continued generosity. 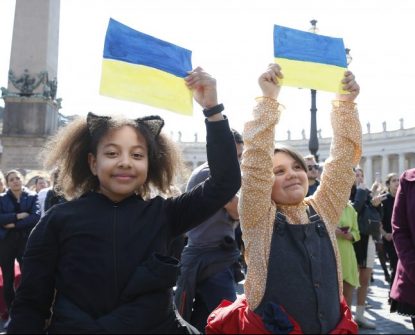 Children hold Ukrainian flags as Pope Francis leads the Angelus from the window of his studio overlooking St. Peter’s Square at the Vatican March 13, 2022. Appealing again for peace in Ukraine, Pope Francis said those who support violence profane the name of God. (CNS photo/Paul Haring)

He also asked Catholic parishes and religious orders around the world “to increase moments of prayers for peace.”

“God is the God only of peace, he is not the God of war,” he said. “Those who support violence profane his name.”

Pope Francis led the people in the square, including several carrying Ukrainian flags, in a moment of silent prayer that God would “convert hearts to a firm desire for peace.”

After the Angelus, the Vatican used the pope’s English-language Twitter account to send, in 10 tweets, his entire appeal in Russian and Ukrainian.

NEXT: Generosity in action: Crisis unites Hungarians to common cause