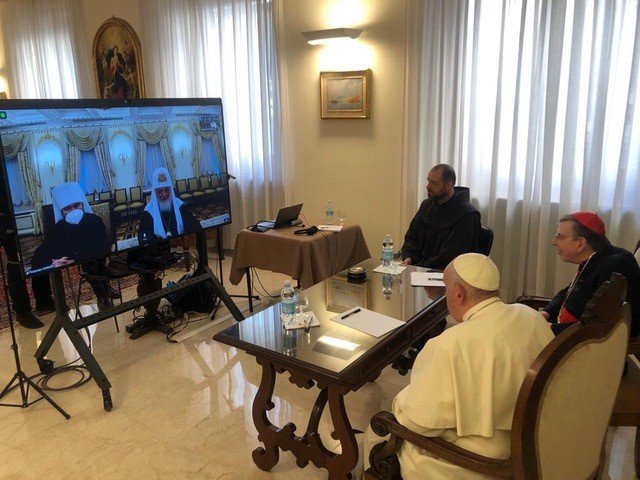 VATICAN CITY (CNS) — Pope Francis and Russian Orthodox Patriarch Kirill spoke via video conference about the ongoing crisis in Ukraine and the hopes for a peaceful solution, the Vatican said.

In a statement released March 16, Vatican spokesman Matteo Bruni said the meeting “was motivated by the desire to show, as shepherds of their people, a road to peace, to pray for peace so that there may be a cease-fire.”

“We are shepherds of the same holy people who believe in God, in the Holy Trinity, in the holy mother of God: that is why we must unite in the effort to help peace, to help those who suffer, to seek ways of peace, to stop the gunfire,” the pope said, according to Bruni.

Speaking about the importance of the negotiations between Russia and Ukraine, the pope told Patriarch Kirill that “those who pay the bill for the war are the people, it is both the Russian soldiers and the people who are being bombed and die.”

Bruni said the pope also told the Russian Orthodox patriarch that as shepherds, both have a “duty to stay close and help all people who are suffering from the war.”

“There was a time when we spoke, even in our churches, of a holy war or a just war. Today we cannot speak like that. The Christian conscience of the importance of peace has developed,” the pope said.

The Vatican spokesman said Pope Francis and Patriarch Kirill agreed that the Catholic and Orthodox Churches are called “to contribute to strengthening peace and justice.”

“Wars are always unjust, because the ones who pay are the people of God. Our hearts cannot help but weep before the children, the women killed, all the victims of war. War is never the way. The Spirit that unites us asks us as shepherds to help the people who suffer from war,” the pope said.

The Moscow Patriarchate also released a statement, saying the two religious leaders had “a detailed discussion of the situation on Ukrainian soil” and that “special attention was paid to the humanitarian aspects of the current crisis and the actions of the Russian Orthodox Church and the Roman Catholic Church to overcome its consequences.”

“The parties stressed the utmost importance of the ongoing negotiation process, expressing the hope that a just peace can be achieved as soon as possible,” the statement said.

Since the conflict began in late February, the leaders of the Roman Catholic Church and the Russian Orthodox Church found themselves at odds with regard to Russia’s attack on Ukraine.

Although he expressed hope for a peaceful resolution, Patriarch Kirill, a staunch ally of Russian President Vladimir Putin, has supported Russia’s actions.

In a March 6 homily, he doubled down on his support and said the “grave events” in Ukraine were related “to the deterioration of the political situation in the Donbas,” the eastern Ukrainian region loyal to Russia, and a necessary pushback against Western ideals and values, particularly homosexuality.

Most recently, in Amsterdam, a Russian Orthodox church announced that it would split with the Moscow Patriarchate and made a request to join the Ecumenical Patriarchate of Constantinople.

While Pope Francis has not directly criticized Russia, he condemned the war, which Russian authorities have framed as a “special military operation.”

“Rivers of blood and tears are flowing in Ukraine. It is not merely a military operation, but a war, which sows death, destruction and misery,” the pope said during his Angelus address March 6.

During his general audience March 16, Pope Francis recited a prayer for peace in Ukraine that compared the suffering of Jesus to those who were “born under the bombs of Kyiv,” those lying “dead in the arms of a mother in Kharkiv” and the “20-year-olds sent to the front line.”

He also asked forgiveness from God for those who “legitimize cruelty” through violence and prayed for an end to the war through divine intervention.

“O Lord, stop the violence. Stop us, Lord,” he prayed.

PREVIOUS: Generosity in action: Crisis unites Hungarians to common cause

NEXT: Pope to consecrate Russia, Ukraine to Mary