Prelates arrive in Ukraine, Hungary on mission of hope 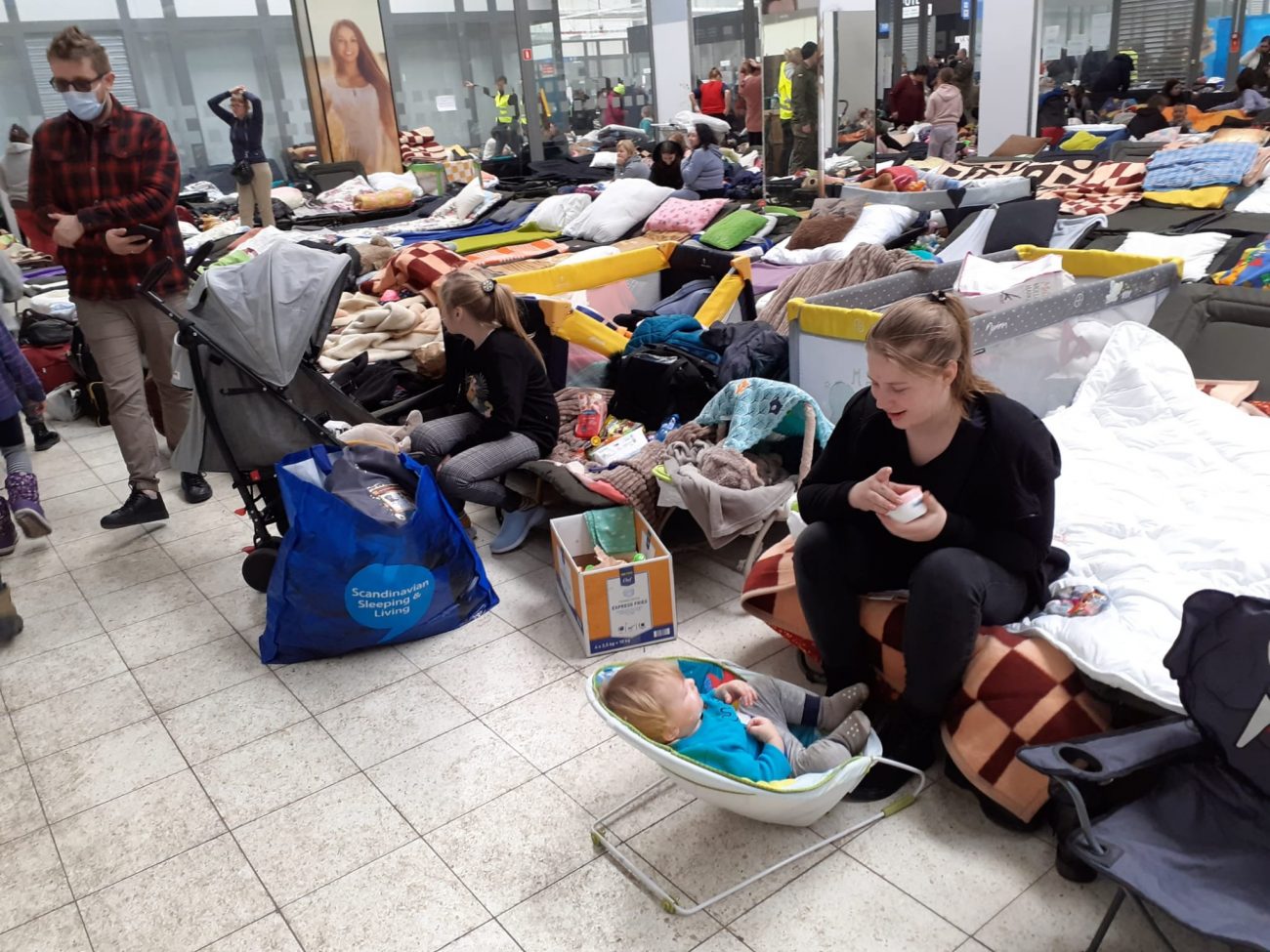 Ukrainian refugees are pictured in a supermarket that was turned into a refugee center in Korczowa, Poland, March 8, 2022. Cardinal Konrad Krajewski, the papal almoner, visited refugees in the center. (CNS photo)

VATICAN CITY (CNS) — Two cardinals arrived at separate destinations on one mission entrusted to them by Pope Francis: to bring relief, hope and encouragement to suffering Ukrainians.

Polish Cardinal Konrad Krajewski, papal almoner, arrived in the western Ukrainian city of Lviv March 8 and met with Archbishop Sviatoslav Shevchuk of Kyiv-Halych, head of the Ukrainian Catholic Church, and Archbishop Mieczyslaw Mokrzycki, head of the Latin-rite Archdiocese of Lviv.

Father Andriy Soletskyy, a spokesman for Archbishop Shevchuk, told Catholic News Service March 9 that Archbishop Shevchuk traveled from Kyiv to Lviv the day before specifically to meet with Cardinal Krajewski and help him fulfill the mission Pope Francis had entrusted to him. That may include helping the cardinal get to Kyiv “if possible,” Father Soletskyy said.

However, he said, for the security of both the cardinal and Archbishop Shevchuk, the church will not share details of how or when either is traveling.

Lviv has not been shelled, “thanks be to God,” Father Soletskyy said, but the city in Western Ukraine is being overwhelmed with displaced people gathering there to try to find rides, trains or buses to Poland, Hungary or Romania. People are sleeping in line at the train station and every church has opened as a shelter.

But with Lviv’s population having doubled in the past two weeks, he said, the ability to shelter and feed everyone is becoming critical.

According to the Ukrainian Catholic Church, Cardinal Krajewski was to visit a variety of social service centers and take part March 10 in a joint prayer service with “representatives of the Ukrainian Council of Churches and religious organizations.” 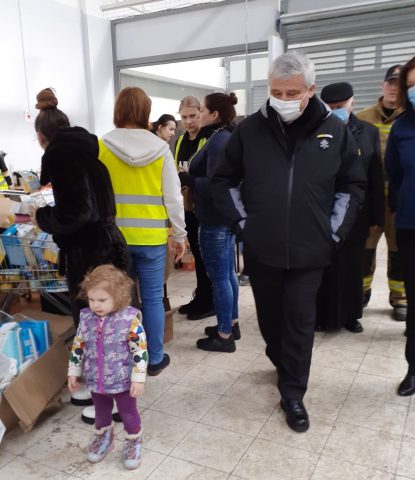 Cardinal Konrad Krajewski, the papal almoner, visits Ukrainian refugees in Korczowa, Poland, March 8, 2022, at a supermarket that was turned into a temporary refugee center. (CNS photo)

Prior to his arrival in Ukraine, Cardinal Krajewski met with Caritas volunteers helping refugees in several Polish cities near the border with Ukraine.

According to the Polish Catholic weekly Gosc Niedzielny, the Polish cardinal was asked by journalists if he was afraid of entering a war zone.

“I am afraid, as everyone is afraid, but I went to confession before leaving; I have no debts, I wrote a will,” he said. “I go freely to bring the Gospel. I want to be with these people.”

Canadian Cardinal Michael Czerny, interim president of the Dicastery for Promoting Integral Human Development, arrived in Budapest, Hungary, March 8 and visited the Keleti train station where he met with Caritas volunteers and thanked them for their work.

He also met with refugees who fled the violence in Ukraine, including two medical students from Nigeria as well as several from China and Vietnam.

Despite reports of discrimination against African and Asian residents in Ukraine attempting to flee the country, Vatican News said the group did not experience difficulties crossing the border. 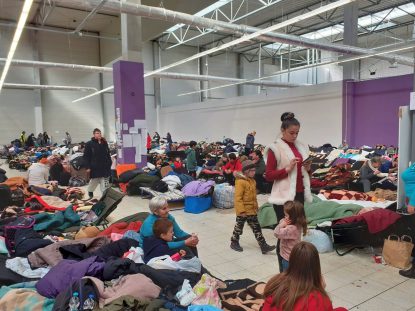 Ukrainian refugees are pictured in a supermarket that was turned into a refugee center in Korczowa, Poland, March 8, 2022. Cardinal Konrad Krajewski, the papal almoner, visited refugees in the center. (CNS photo)

According to Vatican News, one of the Nigerian students, Joyce, told Cardinal Czerny, “I just want to go home.” Cardinal Czerny shook her hand and replied, “Good luck. God is with you, and the pope is close to you.”

The cardinal met March 9 with Zsolt Semjén, Hungary’s deputy prime minister, who assured him Hungary would welcome all refugees from Ukraine “without limits.”

Vatican News said the cardinal asked Semjén to make that welcoming attitude a permanent part of Hungarian government policy and to expand the country’s welcoming of people seeking refuge.

The government of Prime Minister Viktor Orban has been promoting an extremely restrictive immigration policy for the country.

Contributing to this report was Cindy Wooden in Rome. 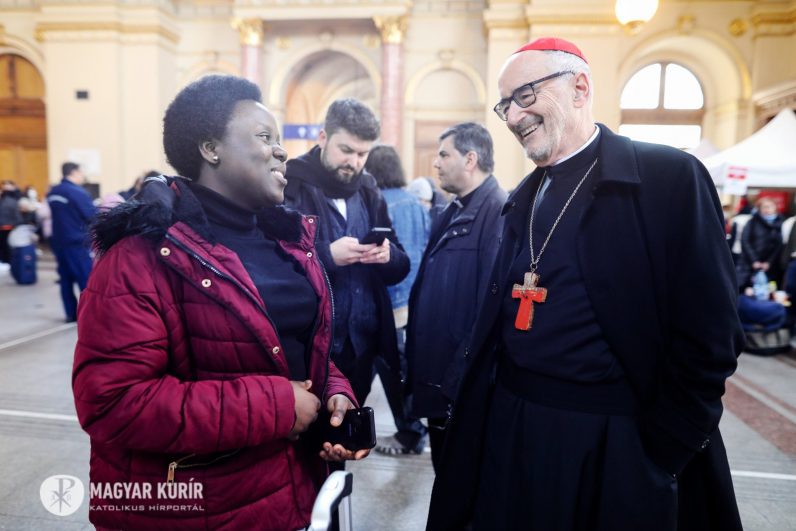 Canadian Cardinal Michael Czerny, interim president of the Dicastery for Promoting Integral Human Development, speaks with Joyce, a Nigerian medical student who was studying in Ukraine when the war began. The cardinal visited refugees arriving from Ukraine at the Keleti train station in Budapest, Hungary, March 8, 2022. (CNS photo/courtesy Magyar Kurír)