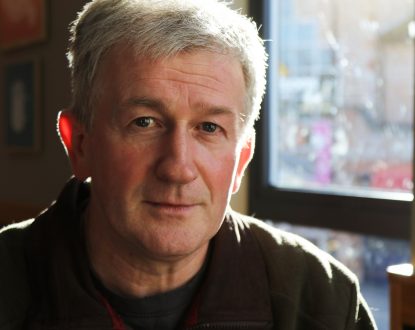 Dr. Dermot Kearney, a hospital cardiologist and a past president of the UK’s Catholic Medical Association, is seen March 6, 2022, in Chester-le-Street, England. (CNS photo/Simon Caldwell)

NEWCASTLE, England (CNS) — A British medical regulator has reversed a ban on a Catholic doctor from offering “abortion pill reversal treatment” to women who wished to keep their babies.

The General Medical Council last year ordered Dr. Dermot Kearney, a hospital cardiologist and a past president of the U.K.’s Catholic Medical Association, to stop prescribing progesterone, a natural hormone, to women who wished to “reverse” medical abortions part of the way through.

But when Kearney began legal proceedings at the High Court of Justice in London to challenge the restrictions imposed by the Interim Orders Tribunal of the GMC last May, the regulator later declared there was no case against him.

“I am relieved and delighted to have been exonerated,” said Kearney, who has helped 32 women to give birth to healthy babies after reversing the effects of the abortion drugs.

“The truth about abortion reversal treatment must now be told and medical professionals who are able and willing to support women with the treatment should be allowed to do so without fear,” he told Catholic News Service.

“My hope is that woman across the U.K. will now be told by medical regulators and abortion providers that abortion reversal treatment is safe, that it is available, and that success is possible if they regret their decision to have an abortion and choose to seek help,” he said.

The first pill used in medical abortions, mifepristone, causes the wall of the uterus, to which the fetus is attached, to break down.

The second, misoprostol, causes contractions to expel the contents of the uterus and is taken 24 to 48 hours after the first pill.

Great Britain’s National Health Service has not officially approved any way to stop the process once a woman, after taking the first pill, changes her mind before taking the second pill. NHS advises women to monitor whether their pregnancy continues.

The women who contacted Irish-born Kearney changed their minds about aborting their babies after taking the first pill. They were either referred to him or they found him on the internet while looking for abortion reversal treatment.

He wrote prescriptions of progesterone to undo the harm because research in the United States has shown it neutralizes the effects of mifepristone, resulting in healthy births in about 55% of cases.

On learning of his activities, MSI Reproductive Choices, a major U.K. abortion provider, along with its allies complained to the GMC, which regulates the conduct of doctors, that the abortion pill reversals were a risk to women.

But in late February, the GMC rejected their claim after finding no evidence to suggest progesterone puts the health of either women or their unborn children in danger. GMC members heard evidence from 10 patients who spoke approvingly of the care Kearney had given to them.

Kearney said later that he was “the victim of a coordinated campaign by senior figures in the abortion industry who have been determined to prevent women in urgent need from accessing abortion reversal treatment.”

Andrea Williams, chief executive of the Christian Legal Centre, which supported Kearney, said in a March 6 statement: “We are delighted that justice has been served for this brilliant and compassionate doctor. We are, however, deeply concerned that a case was brought against him in the first place.

“The mantra of the abortion lobby of ‘my body my choice’ should extend to a woman changing her mind about going through with an abortion. The abortion industry does not want to give women that choice,” she said.

PREVIOUS: Prelates arrive in Ukraine, Hungary on mission of hope

NEXT: Papal envoy sets off for besieged Ukrainian cities