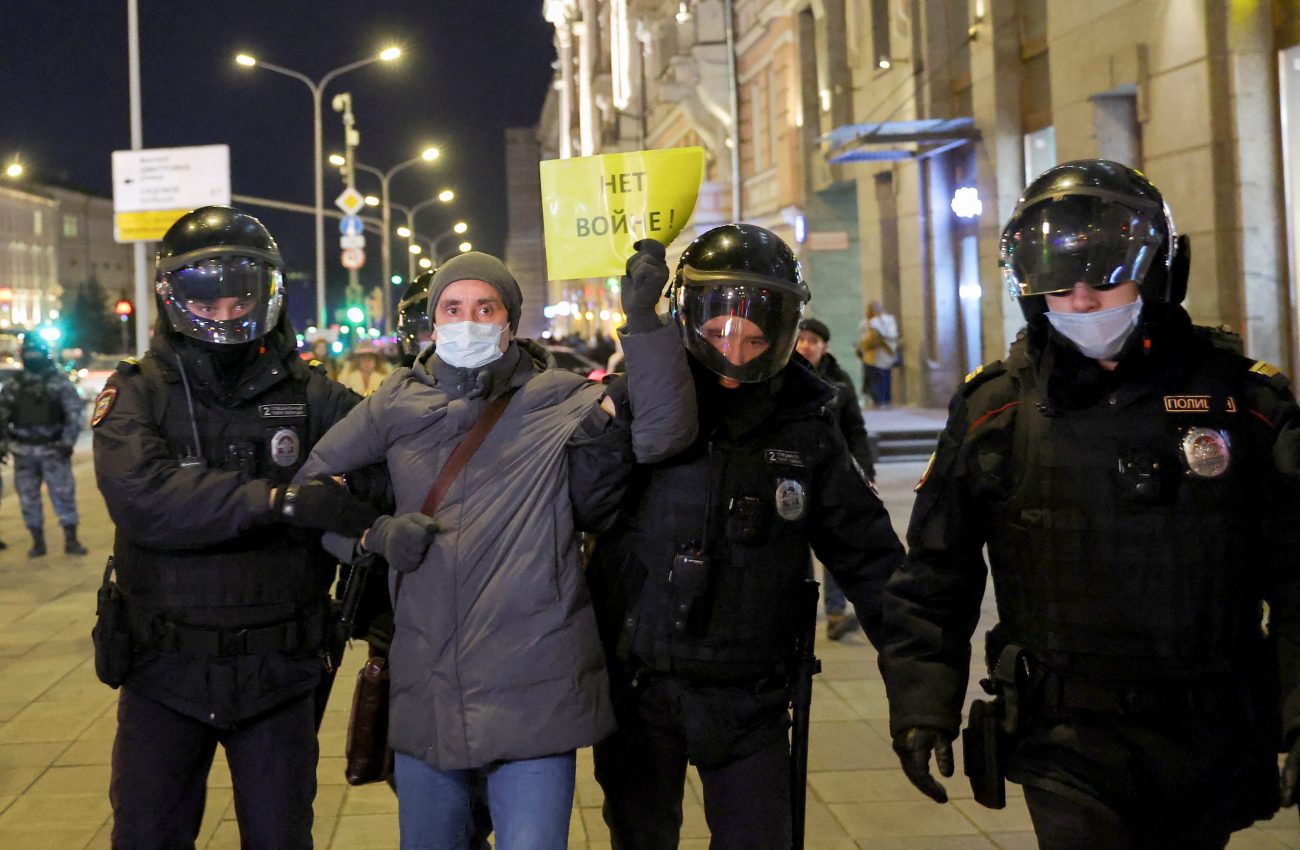 A person is detained by police during an anti-war protest in Moscow Feb. 24, 2022, after Russia invaded Ukraine. The sign reads "No war." Criminal Code amendments, passed March 4 by the parliament, allowed for heavy fines and jail terms up to 15 years for "public dissemination of falsehoods about the use of Russia's armed forces." (CNS photo/Evgenia Novozhenina, Reuters)

WARSAW, Poland (CNS) — A Catholic professor said Russia’s clergy fear arrest if they question the war against Ukraine and warned the church now faced a “new era of silence.”

“Prayers for an immediate cease-fire are being said in parishes — but priests can no longer speak publicly,” said the lay Catholic, who asked not to be named.

“We are back in a situation very like the atheist Soviet Union, when a priest must turn up the radio or TV so as not to be overheard by the special services. They’re explaining they don’t want to say anything that could harm the Catholic community, or see them thrown in jail with their churches closed.”

The Catholic spoke to Catholic News Service March 10 as Russia’s war against Ukraine entered its third week and the Russian government clamped down on all nonofficial news and information. Criminal Code amendments, passed March 4 by the Russian Duma, allowed for heavy fines and jail terms up to 15 years for “public dissemination of falsehoods about the use of Russia’s armed forces,” while high-profile media outlets, including the religious Credo Press website, have now been closed.

The professor said many Catholics had friends and family members in Ukraine and remained well-informed about events, but added that priests could face prison if they used the wrong words in homilies.

“Though Catholics are divided over this war, with some supporting it, most have a good enough grasp of the church’s social teaching to differentiate between a just and an aggressive war,” the Catholic told CNS.

“Many brave Catholics are compensating for their clergy’s reticence by freely calling things by their real names.” 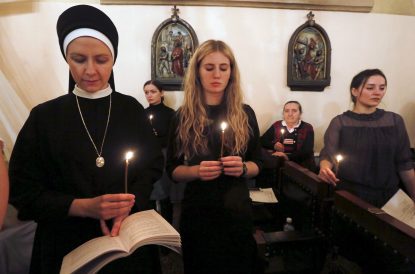 A nun and others pray during Mass at a Catholic church in Krasnoyarsk, Russia, March 26, 2016. Since Russia adopted laws against disseminating wrong information about its invasion of Ukraine, clergy fear arrest if they question the war, said a Catholic professor. (CNS photo/Ilya Naymushin, Reuters)

The lay Catholic said Russia’s Catholic bishops had barred the publication of a March 6 Angelus message by the pope, describing the offensive as “not merely a military operation, but a war sowing death,” to avoid “possible harm, damage and persecution” under the new legal curbs.

The spokesman for Russia’s five-member bishops’ conference, Father Kirill Gorbunov, told CNS March 8 that the bishops would debate the new law on “public dissemination of falsehoods” at their March 15 plenary.

The professor said the information crackdown was “easily circumvented” by encrypted news sources and virtual private networks, but was likely to remain in force indefinitely.

“Russia’s public sphere is dominated right now by the logic of us and them — and it’s easy to identify Catholics when you’re looking for an enemy,” said the Catholic professor.

“This is why no one is blaming our clergy for not raising their voices, as Catholic teaching would otherwise require. The generations who lived through communism especially understand the need for caution.”

The professor added that many Catholics were leaving Russia to avoid a feared military crackdown and possible army draft, while priests ministering in the country from NATO countries, such as Poland and Germany, could also face pressure to return home.

“Many people are expecting a new Iron Curtain to fall, closing our borders and cutting our access to the world. Although the police are busy with other tasks right now, they could soon turn on us. Our church may now be facing a new era of silence.”

NEXT: Nicaragua expels the Vatican ambassador