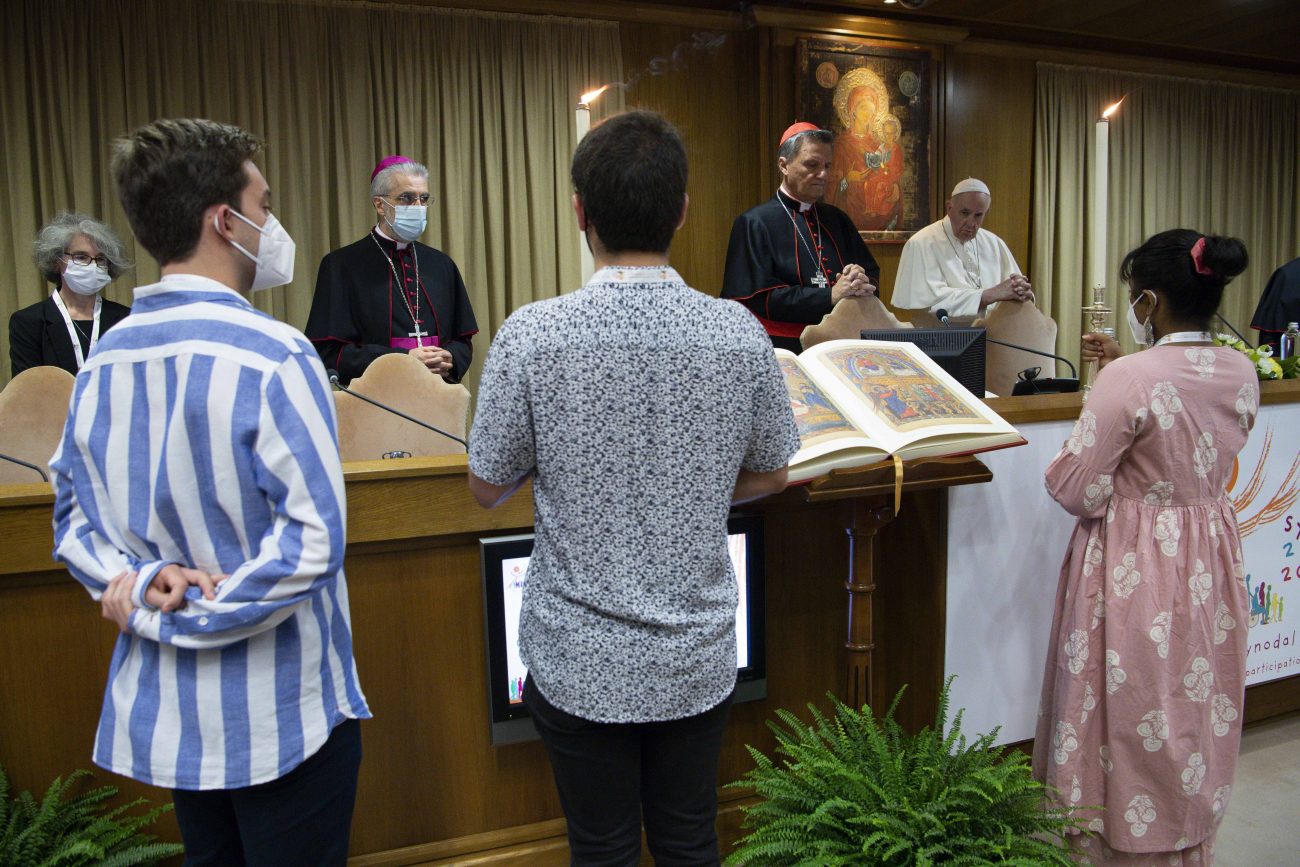 Pope Francis leads a meeting with cardinals, bishops, priests, religious and laypeople from around the world in the Synod Hall at the Vatican Oct. 9, 2021. "When the spirit of synodality is practiced, it would make the church an inverted pyramid," a prominent Indian theologian told a recent forum on synodality. (CNS photo/Paul Haring)

BENGALURU, India (CNS) — The Catholic Church’s hierarchy should undergo deep structural changes and share administrative powers with all Catholics if it wants to create a synodal church as envisioned by Pope Francis, said a prominent Indian theologian.

Father Felix Wilfred, former secretary of the theological advisory committee of the Federation of Asian Bishops’ Conferences, said the synodality that Pope Francis is stressing calls for “a transition from the synodal of bishops as an institution to the synodal church” as a way of being. Ucanews.com reported he said this requires “deep structural changes” and should address “major theological issues.”

In a keynote address at a mid-March seminar on synodality before some 600 Catholic leaders, theologians and scholars, the 74-year-old theologian, who has been a member of the Vatican’s International Theological Commission, made a series of recommendations, insisting that the Indian church needs to change radically to embody Pope Francis’ vision for a synodal church.

“When the spirit of synodality is practiced, it would make the church an inverted pyramid. Canon law needs to undergo a thorough change, as the present code states clearly that the power of governance is reserved for those in sacred orders,” he said.

Ucanews.com reported Father Wilfred said through baptism, everyone is made equal, and all Catholics are expected to cooperate in the exercise of the power.

He questioned the Indian church continuing to have two different synodal structures — Eastern- and Latin-rite — despite both having the same socio, cultural and economic contexts.

The Indian Catholic Church includes the Syro-Malabar and Syro-Malankara churches, which claim the apostolic tradition of St. Thomas, and the Latin-rite church introduced by the Portuguese in the 16th century.

Each Eastern-rite church has its own bishops’ synod, and the Latin bishops have a separate bishops’ conference, ucanews.com reported. Indian bishops of all three rites together are members of a fourth body called the Catholic Bishops’ Conference of India.

Father Wilfred told the Bangalore gathering, which included bishops and seminary professors, that until the Council of Trent, provincial councils decided even the appointment of the bishops in communion with the pope.

“So, we must be able to think, decide and act by ourselves,” he said.

At least 57 papers were presented at the March 21-23 program organized by the missiology department of St. Peter’s seminary in Bengaluru, formerly Bangalore.

NEXT: Kharkiv bishop accuses Russia of terror tactics in Ukraine