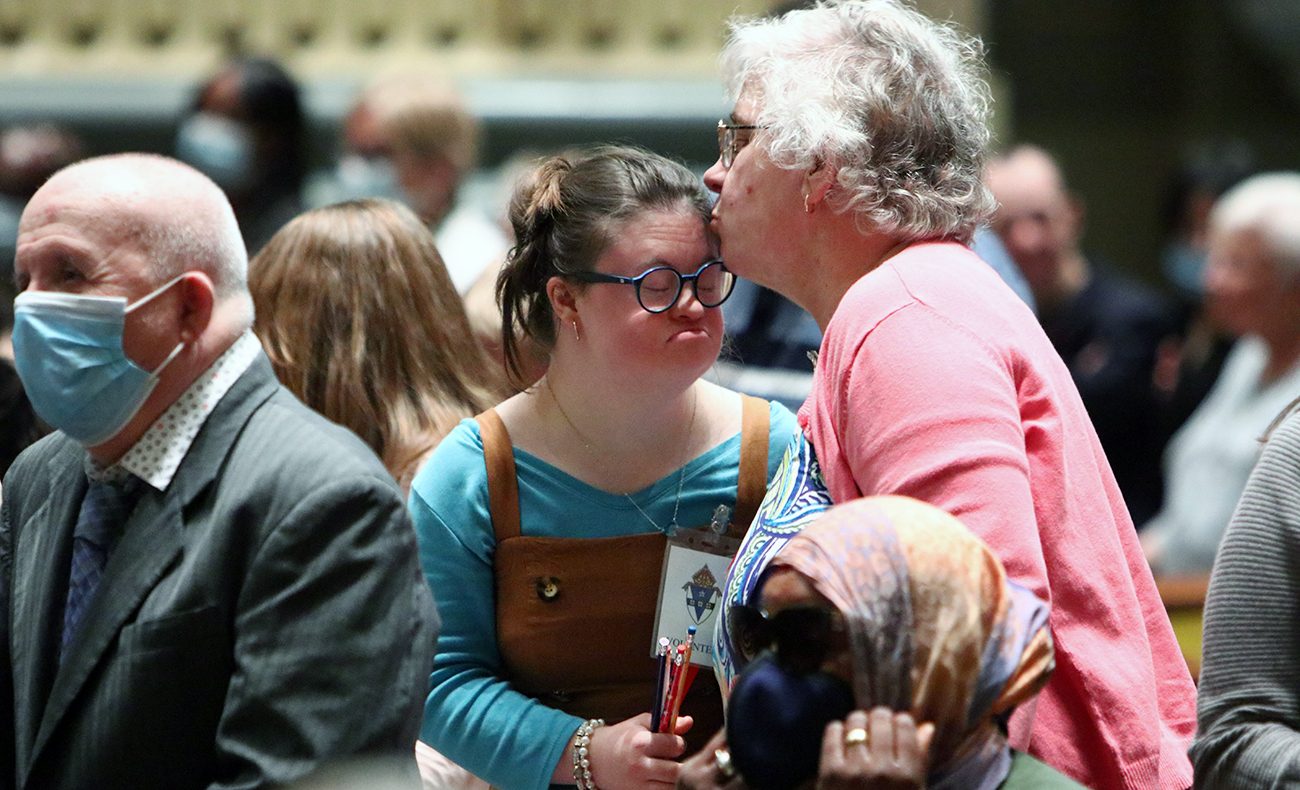 A young woman receives a kiss during the April 24 Mass for Persons with Disabilities at the Cathedral Basilica of SS. Peter and Paul. (Sarah Webb)

Persons with disabilities have a “very powerful and very transformative” love that can “help (others) become whole,” said Archbishop Nelson Pérez.

The archbishop was the principal celebrant and homilist at the annual archdiocesan Mass for Persons with Disabilities, which drew some 275 participants April 24 to the Cathedral Basilica of SS. Peter and Paul.

The liturgy – which this year coincided with Divine Mercy Sunday — has been a tradition for at least three decades, according to Immaculate Heart of Mary Sister Kathleen Schipani, director of the archdiocesan Office for Persons with Disabilities and the Deaf Apostolate, which together sponsor the Mass.

Three American Sign Language (ASL) and two tactile interpreters (who relayed information directly to participants’ hands) assisted throughout the liturgy, at which a number of persons with disabilities assisted.

Among them were lector Jordan Sanjaya, who proclaimed the second reading (Rev 1:9-11a, 12-13, 17-19) in ASL, and altar server Michael, a resident of the Communities of Don Guanella and Divine Providence (DGDP), which serve individuals with intellectual disabilities through a continuum of care under the direction of archdiocesan Catholic Social Services.

A member of the Knights of Columbus, Michael said he enjoyed holding one of the processional candles, but his primary purpose in attending the liturgy was simply to “pray.”

The Mass provided “a sense of belonging and inclusion” that formed “the heart of the celebration,” said Servant of Charity Father Dennis Weber, DGDP’s director of ministry and mission. 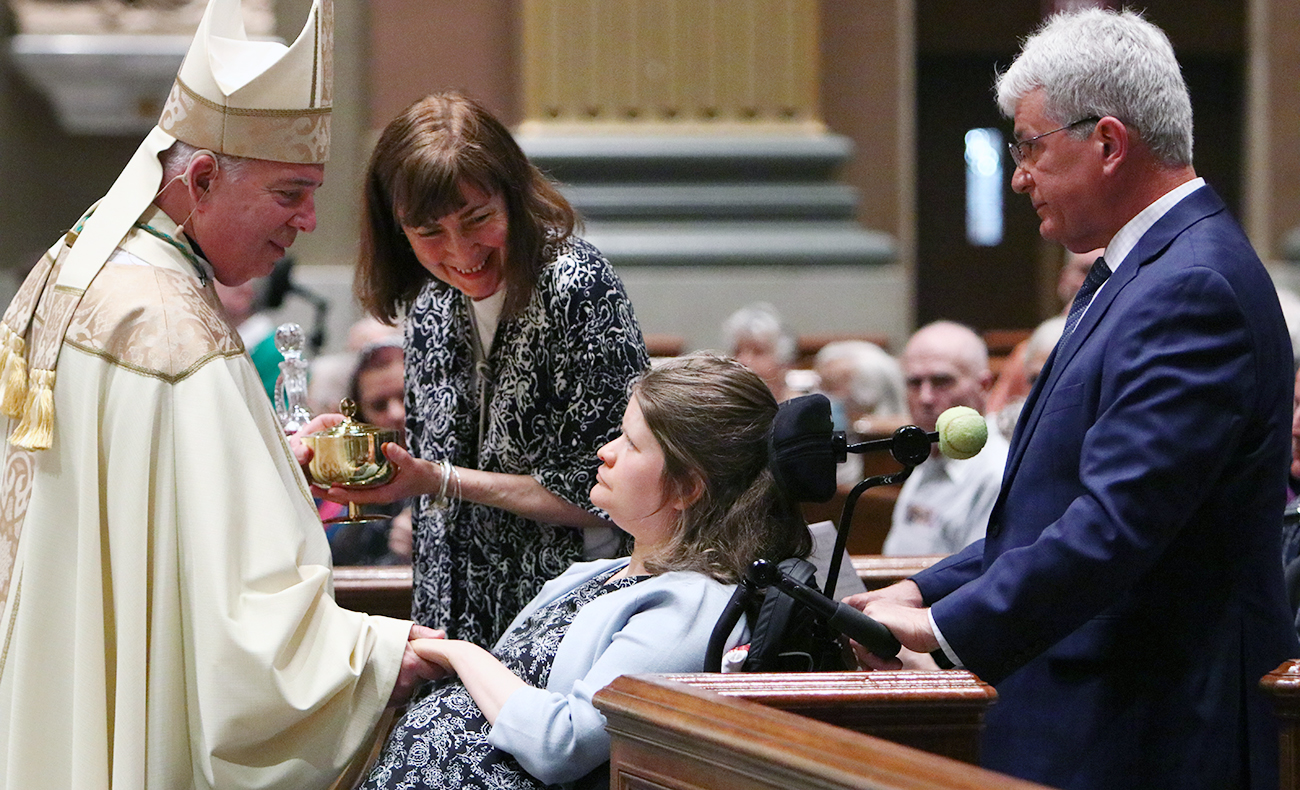 Archbishop Nelson Pérez greets a young woman during the offertory procession at an April 24 Mass for Persons with Disabilities at the Cathedral Basilica of SS. Peter and Paul. (Sarah Webb)

That message was highlighted by the post-Communion presentation of the One Body in Christ Award to Msgr. Richard Bolger.

Inspired by the Scripture passage Romans 12:5, in which St. Paul describes the church as “members of one another,” the honor recognizes those who “show a passion and commitment for promoting the inclusion of persons with disabilities within the life of the church,” said Sister Kathleen.

Throughout his priesthood, Msgr. Bolger has supported annual retreats for persons with disabilities. While pastor of St. David Parish in Willow Grove, he welcomed the Our Lady of Confidence School of Special Education and the Marion Bolger Recreational Program, and continues to offer sacramental and pastoral outreach to both.

Such ministry is crucial, said Father Weber, given the ongoing “need for awareness and acceptance of persons with disabilities, not just within the church, but within the world in general.”

“We struggle with that,” he said. “We look in some cases to not having (persons with disabilities) among us, or to see them as less – and tragically, (even) to aborting those with fetal abnormalities. So we really need to go beyond that, and to include, accept and recognize all.”

Pope Francis has called for such inclusion, said Archbishop Pérez, who quoted the pope’s 2021 message for the International Day of Persons with Disabilities: “The church loves you and needs each of you for the fulfilment of her mission at the service of the Gospel.”

The archbishop said he witnessed those words in action during his time as a priest at St. Ambrose Parish in Philadelphia, where a young woman with disabilities undertook to deliver groceries to elderly residents on her block.

Noting that “we all have limitations in life,” Archbishop Pérez said persons with disabilities possess a “great and innocent love” that enables others to heal from wounds often hidden by fear and shame.

“You can help people become whole because of the great love in your hearts,” he said.

Such love embraces all, regardless of abilities, said the archbishop.

“We have all been blessed with incredible potential to love with the love of God,” he said. “Know that, believe that, celebrate that, and give that generously.”

NEXT: Outreach workers ‘break stigma, bring hope’ to those in addiction