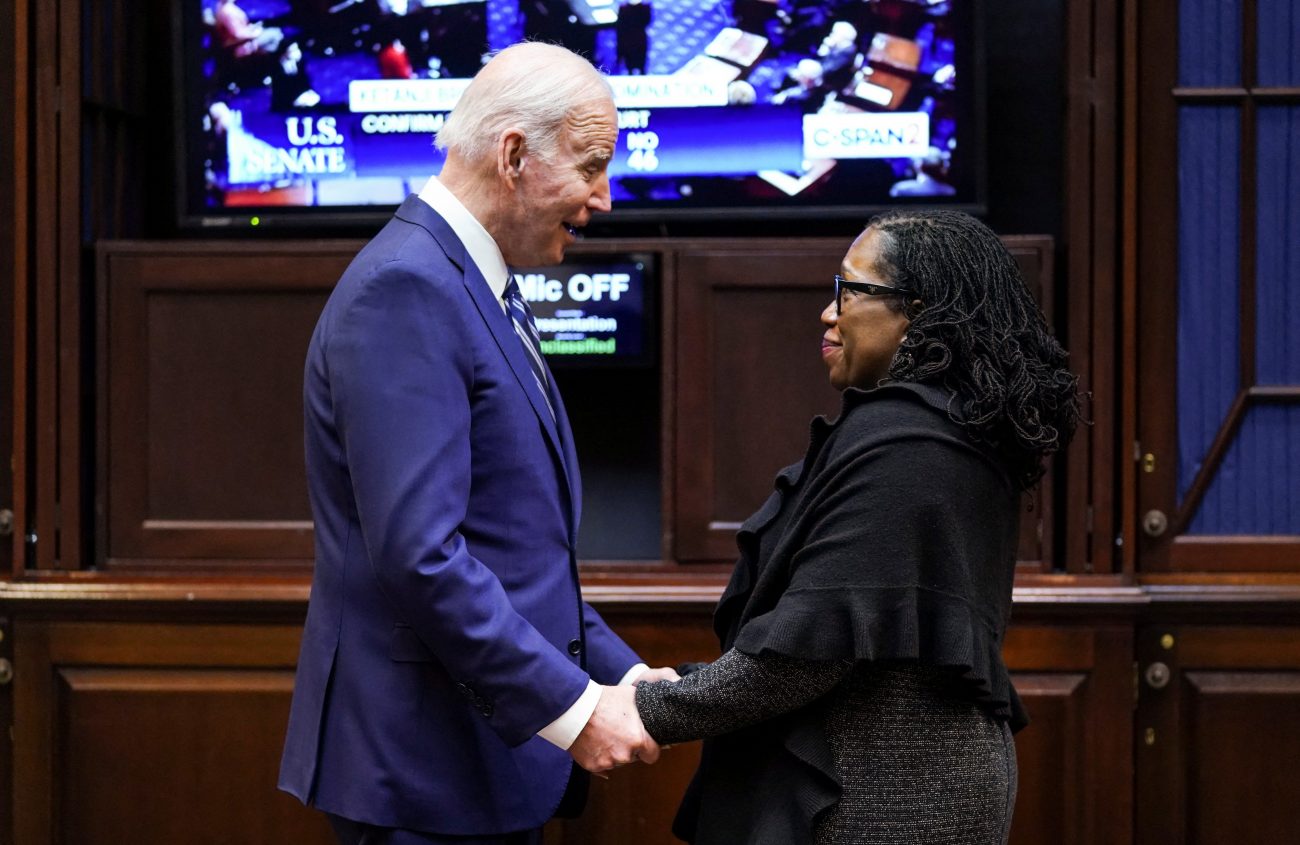 WASHINGTON (CNS) — In a 53-47 vote, the U.S. Senate April 7 confirmed Judge Ketanji Brown Jackson to the Supreme Court, making her the first Black woman to fill that role.

“Judge Jackson’s confirmation was a historic moment for our nation. We’ve taken another step toward making our highest court reflect the diversity of America,” tweeted President Joe Biden after the tally was announced by Vice President Kamala Harris, who presided over the vote.

On the Senate floor, just prior to the vote, Senate Majority Leader Chuck Schumer, D-N.Y., said: “This is a great moment for Judge Jackson, but it is an even greater moment for America as we rise to a more perfect union.”

The senator, called Jackson’s confirmation a “giant, bold and important step” and also stressed the significance that she would be the first former federal public defender to serve on the nation’s high court.

Jackson will fill the vacancy that will be left by Supreme Court Justice Stephen Breyer when he retires this summer at the end of the current term. She will be sworn in at that time.

Her approval only needed a simple majority of 51 votes, which had been expected when all the Democrats announced they would support her and three Republican senators — Mitt Romney of Utah, Susan Collins of Maine and Lisa Murkowski of Alaska — said she would have their vote, which she got.

Just as the Senate vote was divided, advocacy groups also had a mixed reaction.

“Judge Jackson’s work as a public defender and a civil rights lawyer provide her a necessary framework” to serve on the court, said Mary Novak, executive director of Network, a Catholic social justice lobby.

She said her organization and its supporters are confident Jackson will “bring our country a step closer to achieving a more representative, inclusive and just democracy.”

Conversely, Jeanne Mancini, president of the March for Life Education and Defense Fund, said her organization was disappointed by the Senate’s vote.

“Jackson’s record of judicial activism fails to align with the role of a Supreme Court justice, which is to interpret the constitution without prejudice and to apply the law in an unbiased manner,” she said.

“Pro-life Americans understand the dangers of judicial activism, and the threats it poses to women and their children,” she added.

And Kelly Shackelford, president, CEO and chief counsel for First Liberty Institute, a group that defends religious freedom, said she was concerned that Jackson “will not protect our nation’s first freedom. Although Judge Jackson conceded religious liberty is a ‘fundamental right,’ we remain unconvinced that she will protect that right based on her repeated refusals to specify her judicial philosophy or what she believes the free exercise of religion means.”

Three days before the vote on the Senate floor, members of the Senate Judiciary Committee spent more than three hours debating Jackson’s nomination and going over points they made during their questioning of the nominee during the hearings.

Republican members continued their criticism of Jackson, saying she was soft on crime and had not revealed her judicial philosophy, while Democrats emphasized Jackson’s qualifications for the role and the historic opportunity of confirming the nomination of the first Black woman on the Supreme Court.

Jackson, 51, was a judge on the U.S. Circuit Court of Appeals for the District of Columbia Circuit, after serving nearly eight years as a federal trial court judge in Washington. She worked with law firms and served as a federal public defender.

She was born in Washington and grew up in Miami and is a graduate of Harvard College and Harvard Law School in Cambridge, Massachusetts. Jackson met her husband, Patrick, a surgeon at MedStar Georgetown University Hospital, while both were students at Harvard. The couple married in 1996 and have two daughters.

She clerked for Breyer in the 1999-2000 court term and said during remarks announcing her nomination that he demonstrated how a Supreme Court justice can demonstrate civility, grace and generosity of spirit.

During her confirmation hearing, Jackson said it was “extremely humbling” to be considered for Breyer’s seat on the court and added that she “could never fill his shoes,” but if she were confirmed, she hoped she would “carry on his spirit.”

In the days of questioning by members of the Senate Judiciary Committee in late March, Jackson was asked about her role as a judge and a public defender and her views on abortion, critical race theory and her own faith. She was grilled by Republican senators about her defense of Guantanamo Bay detainees and sentences she gave in child pornography cases.

In her opening statement, she said that as a federal judge she has always taken seriously her responsibility to be independent.

“I decide cases from a neutral posture,” she said, adding: “I evaluate the facts, and I interpret and apply the law to the facts of the case before me, without fear or favor, consistent with my judicial oath.”

Court watchers have pointed out that although her appointment is historic, her spot on the bench will not change the court’s current balance of liberal and conservative justices.

Jackson was asked a few times March 22 about her abortion views. Sen. Dianne Feinstein, D-Calif., asked Jackson, as she has asked the past three court nominees, if Roe v. Wade, the court’s 1973 decision legalizing abortion nationwide, was settled law. Jackson, as other nominees before her have done, agreed the court’s decision was a binding precedent.

Later when she was asked by Sen. John Kennedy, R-La., if she has a personal belief on when life begins, she said she did.

“I have a religious belief that I set aside when I am ruling on cases,” she told the committee.

Earlier that day, Sen. Lindsey Graham, R-S.C., asked Jackson about her faith and she responded that she is “Protestant, nondenominational.” When pressed further about how important her faith is to her, she said that it was very important but added: “There is no religious test in the Constitution under Article 6.”

She also said it’s very important to “set aside one’s personal views about things” in the role of a judge.

When she was announced as Biden’s court nominee Feb. 25, Jackson said she was “truly humbled by the extraordinary honor of this nomination” and thanked God for bringing her to this point in her professional journey, adding: “One can only come this far by faith.”

She said she hoped her love of this country and the Constitution would inspire future generations of Americans.