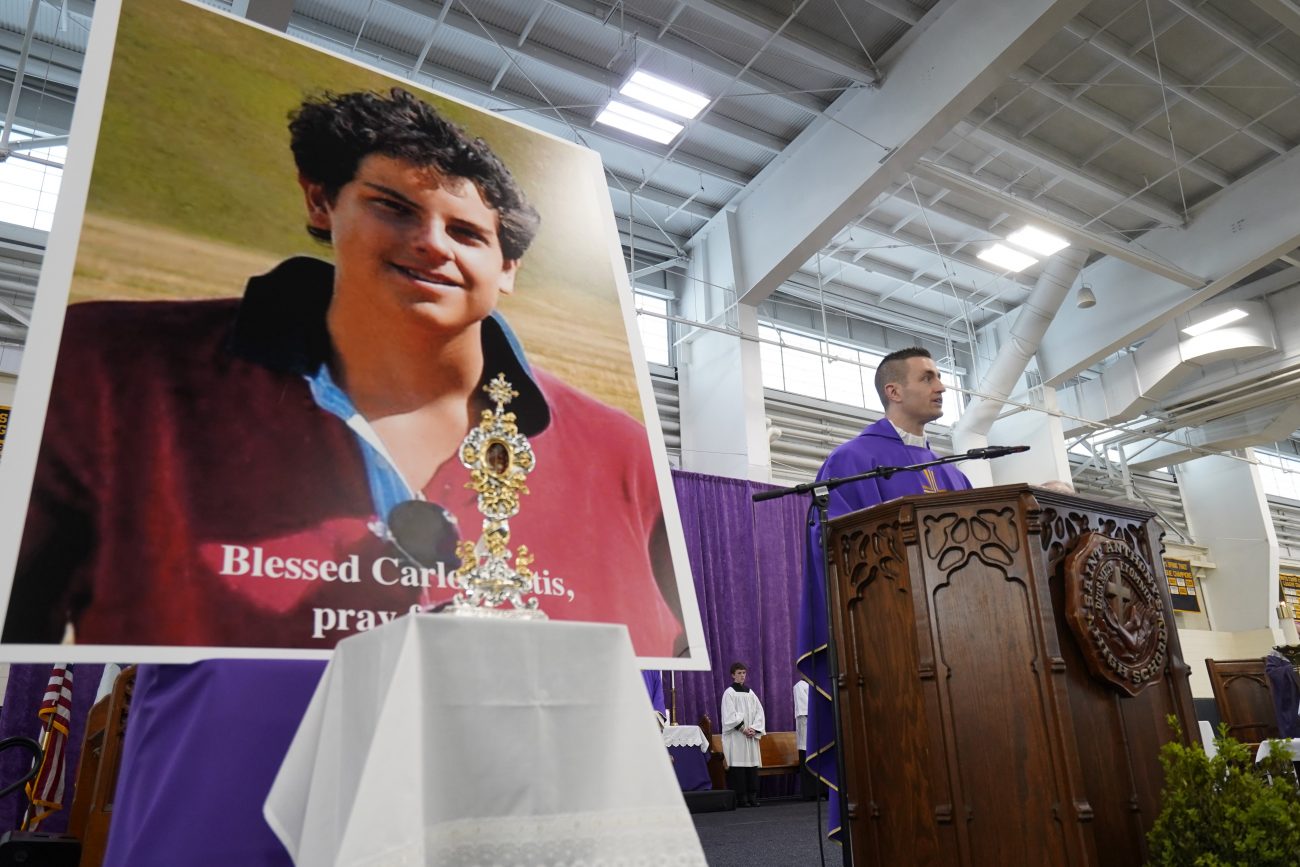 Father Michael Plona, chaplain at St. Anthony's High School in South Huntington, N.Y., proclaims the Gospel during Mass at the school April 4, 2022. Archbishop Domenico Sorrentino of Assisi-Nocera Umbra-Gualdo Tadino, Italy, celebrated the liturgy. The prelate was visiting the New York metropolitan area with the relic during a five-day trip to the U.S. Blessed Acutis, an Italian teen who died in 2006 and was beatified in 2020, is entombed in the Church of Santa Maria Maggiore in Assisi. (CNS photo/Gregory A. Shemitz)

ROCKVILLE CENTRE, N.Y. (CNS) — Archbishop Domenico Sorrentino of Assisi, Italy, brought a first-class relic of Blessed Carlos Acutis to a Catholic high school on Long Island April 4 as he began a five-day tour with the relic.

Blessed Acutis, an Italian teen who died of leukemia in 2006 and was beatified in 2020, is entombed in the Church of Santa Maria Maggiore in Assisi. The 15-year-old’s use of technology to spread devotion to the Eucharist prompted Pope Francis to hail him as a role model for young people today.

“It is a joy for me to carry this relic from Assisi, where Blessed Carlo said he felt ‘happiest of all,'” Archbishop Sorrentino said in a statement ahead of his visit to the New York metropolitan area. His first stop was the Rockville Centre Diocese.

The teen’s remains lie in the Assisi church’s Sanctuary of Renunciation, “the very place where St. Francis, 800 years earlier, stripped himself of everything to follow Jesus,” the archbishop said.

“My prayer is that the presence of Blessed Carlo’s relic stir a desire within our American brothers and sisters, especially the young, not to waste life, but rather to make of it a masterpiece, as chosen by Blessed Carlo in our own times and St. Francis before him,” he added.

Blessed Acutis centered his life on the Eucharist to grow in his relationship with Jesus: “The more we receive the Eucharist,” he would say, “the more we will become like Jesus.”

He strove to attend daily Mass and spend time in eucharistic adoration, believing that “when we get in front of Jesus in the Eucharist, we become saints.”

The relic of the teen is a fragment of the pericardium, the membrane that surrounded and protected his heart.

The archbishop’s relic tour was organized in response to a request by the U.S. Conference of Catholic Bishops and coincided with a New York exhibit, “Museum of Memory, Assisi 1943-1944,”  which recognizes lifesaving actions taken by clergy and citizens of Assisi to protect Jewish refugees during the Holocaust. 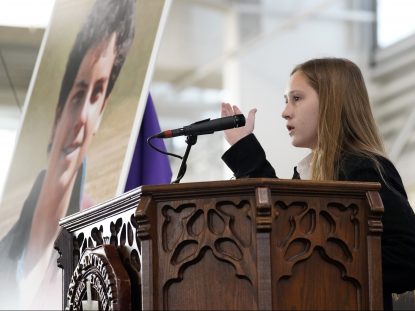 Senior Meredith McPharlin reads the general intercessions during Mass at St. Anthony’s High School in South Huntington, N.Y., April 4, 2022. Archbishop Domenico Sorrentino of Assisi-Nocera Umbra-Gualdo Tadino, Italy, celebrated the liturgy. The prelate was visiting the New York metropolitan area with a relic of Blessed Carlo Acutis during a five-day trip to the U.S. Blessed Acutis, an Italian teen who died in 2006 and was beatified in 2020, is entombed in the Church of Santa Maria Maggiore in Assisi. (CNS photo/Gregory A. Shemitz)

In the Rockville Centre Diocese, Archbishop Sorrentino celebrated Mass for 2,400 students at St. Anthony’s High School in South Huntington, where the relic was exposed.

In the Diocese of Brooklyn, New York, he was to lead a diocesan youth and young adult Holy Hour at Our Lady of Mount Carmel Church in Astoria and a high school rally at Holy Family Church in Flushing, again with exposition of the relic.

Other stops included an evening Mass April 7 at St. Rita’s Church in the Bronx in the Archdiocese of New York with Cardinal Timothy M. Dolan as the celebrant.

Archbishop Sorrentino was being accompanied on the relic tour by Msgr. Anthony J. Figueiredo, a Vatican consultant, and Marina Rosati, founder and curator of the Museum of Memory.

Blessed Acutis is the patron of the first year of a three-year eucharistic revival the U.S. bishops approved during their fall general assembly in November in Baltimore. The revival will culminate in 2024 with the National Eucharistic Congress in Indianapolis.