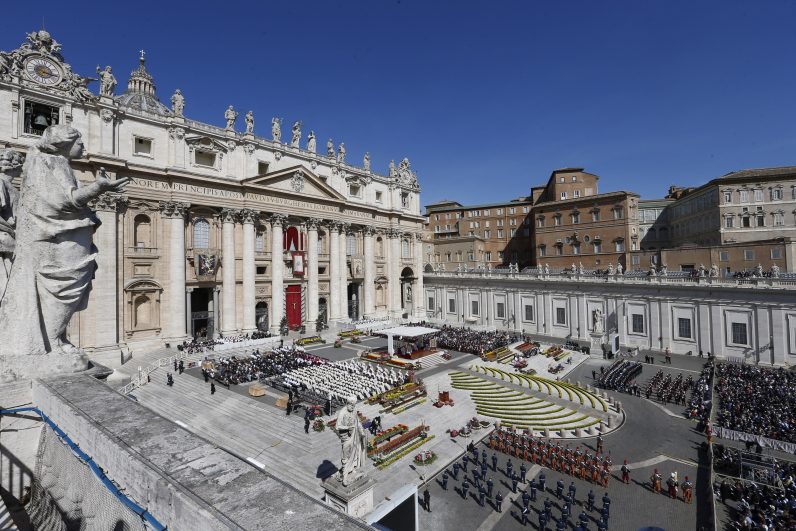 VATICAN CITY (CNS) — The joy of Christ’s resurrection is needed now more than ever in a time when war in Ukraine and other parts of the world makes the hope for peace seem like an illusion, Pope Francis said before giving his Easter blessing.

Like the disciples who were at first doubtful of Jesus rising from the dead, “our eyes, too, are incredulous on this Easter of war,” the pope said as he prepared April 17 to give his Easter blessing “urbi et orbi” (“to the city and the world”).

“We have seen all too much blood, all too much violence. Our hearts, too, have been filled with fear and anguish, as so many of our brothers and sisters have had to lock themselves away in order to be safe from bombing,” he said.

Nevertheless, Christ’s victory over death “is not an illusion” and the world needs “the crucified and risen Lord so that we can believe in the victory of love, and hope for reconciliation.”

Earlier in the day, the Vatican said an estimated 55,000 pilgrims gathered in St. Peter’s Square in the first outdoor Easter Mass since the COVID-19 pandemic began in 2020. A vast floral arrangement adorned the steps leading to the basilica, highlighting the festive atmosphere.

According to Vatican News, the display of flowers, imported from the Netherlands, featured more than 40,000 individual flowers, plants and trees, including tulips, daffodils, and birch trees that accented the joyful celebration of Christ’s resurrection.

Pope Francis did not deliver a homily during the Mass; instead, a hushed silence filled the packed square for several minutes of quiet, prayerful reflection. 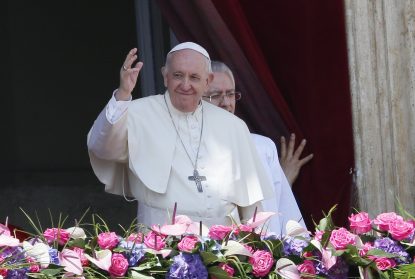 Pope Francis greets the crowd after delivering his Easter message and blessing “urbi et orbi” (to the city and the world) from the central balcony of St. Peter’s Basilica at the Vatican April 17, 2022. (CNS photo/Paul Haring)

As Mass progressed, tens of thousands more began lining the streets outside the square. The Vatican said police estimated 100,000 people had gathered for the post-Mass blessing.

Before the blessing, the pope, standing on the central balcony of St. Peter’s Basilica, addressed the crowd. However, due to knee problems that have caused him difficulty walking and standing for long periods of time, the pope sat and spoke for part of his address.

In his address, the pope said the joyous announcement of Jesus’ resurrection is sorely needed “at the end of a Lent that has seemed endless.”

“We emerged from two years of pandemic, which took a heavy toll,” the pope said. “It was time to come out of the tunnel together, hand in hand, pooling our strengths and resources.”

However, the pope said that instead of unity, the world has shown that “we still have within us the spirit of Cain, who saw Abel not as a brother, but as a rival, and thought about how to eliminate him.”

Only Christ, he added, who bears the wounds inflicted “upon him by our sins, by our hardness of heart, by our fratricidal hatred” has the right “to speak to us of peace.”

“The wounds on the body of the risen Jesus are the sign of the battle he fought and won for us, won with the weapons of love, so that we might have peace and remain in peace,” the pope said.

Continuing his address, Pope Francis prayed for peace in Ukraine and for its people who have been “sorely tried” by the “cruel and senseless war into which it was dragged,” and he urged world leaders to listen to the “people’s plea for peace.”

“May there be an end to the flexing of muscles while people are suffering,” the pope said. “Please, let us not get used to war! Let us all commit ourselves to imploring peace, from our balconies and in our streets!”

The pope also prayed for the countless Ukrainian refugees forced to flee the horrors of war, especially children who were left orphaned.

“As we look at them, we cannot help but hear their cry of pain, along with that of all those other children who suffer throughout our world: those dying of hunger or lack of medical care, those who are victims of abuse and violence, and those denied the right to be born,” he prayed.

Pope Francis also prayed that the war in Ukraine may make the world more aware of the suffering caused by war in other parts of the world, especially in the Middle East, which has been “racked by years of conflict and division.”

The pope prayed for peace in Lebanon, Syria and Iraq, as well as the Holy Land.

“May Israelis, Palestinians and all who dwell in the holy city, together with the pilgrims, experience the beauty of peace, dwell in fraternity and enjoy free access to the holy places in mutual respect for the rights of each,” he said.

He also called for peace in Myanmar, Afghanistan, Libya and Yemen, a country he said “suffers from a conflict forgotten by all, with continuous victims.”

The pope prayed that Jesus would bring peace to the African continent “so that the exploitation it suffers and the hemorrhaging caused by terrorist attacks — particularly in the Sahel region — may cease, and that it may find concrete support in the fraternity of the peoples.”

He also prayed that Ethiopia may continue on the path of reconciliation and dialogue and for an end to violence in Congo. The pope also expressed solidarity for the people of South Africa who have suffered due to devastating floods in the eastern part of the country.

Turning his attention toward Latin America, Pope Francis prayed for its people “who have seen their social conditions worsen in these difficult times of pandemic, exacerbated as well by instances of crime, violence, corruption and drug trafficking.”

He also prayed the Indigenous people of Canada, whom he met earlier in the month to apologize for the church’s role in running residential schools, where many children suffered abuse.

“Let us ask the risen Lord to accompany the journey of reconciliation that the Catholic Church in Canada is making with the Indigenous peoples. May the spirit of the risen Christ heal the wounds of the past and dispose hearts to seek truth and fraternity,” he said.

Standing up from his seat before delivering his blessing, Pope Francis said that while the world suffers the consequences of war, the resurrected Christ who conquered death “exhorts us not to surrender to evil and violence.”

“May we be won over by the peace of Christ! Peace is possible; peace is a duty; peace is everyone’s primary responsibility!” the pope said. 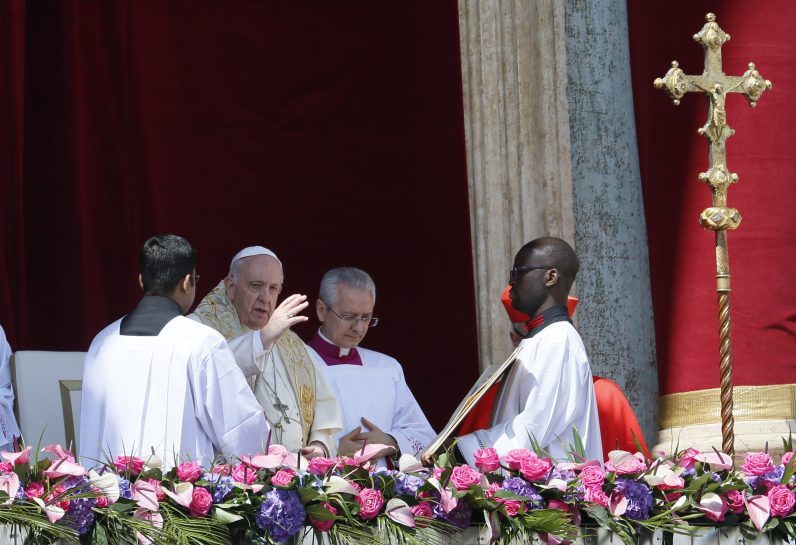 Pope Francis delivers his Easter blessing “urbi et orbi” (to the city and the world) from the central balcony of St. Peter’s Basilica at the Vatican April 17, 2022. (CNS photo/Paul Haring)