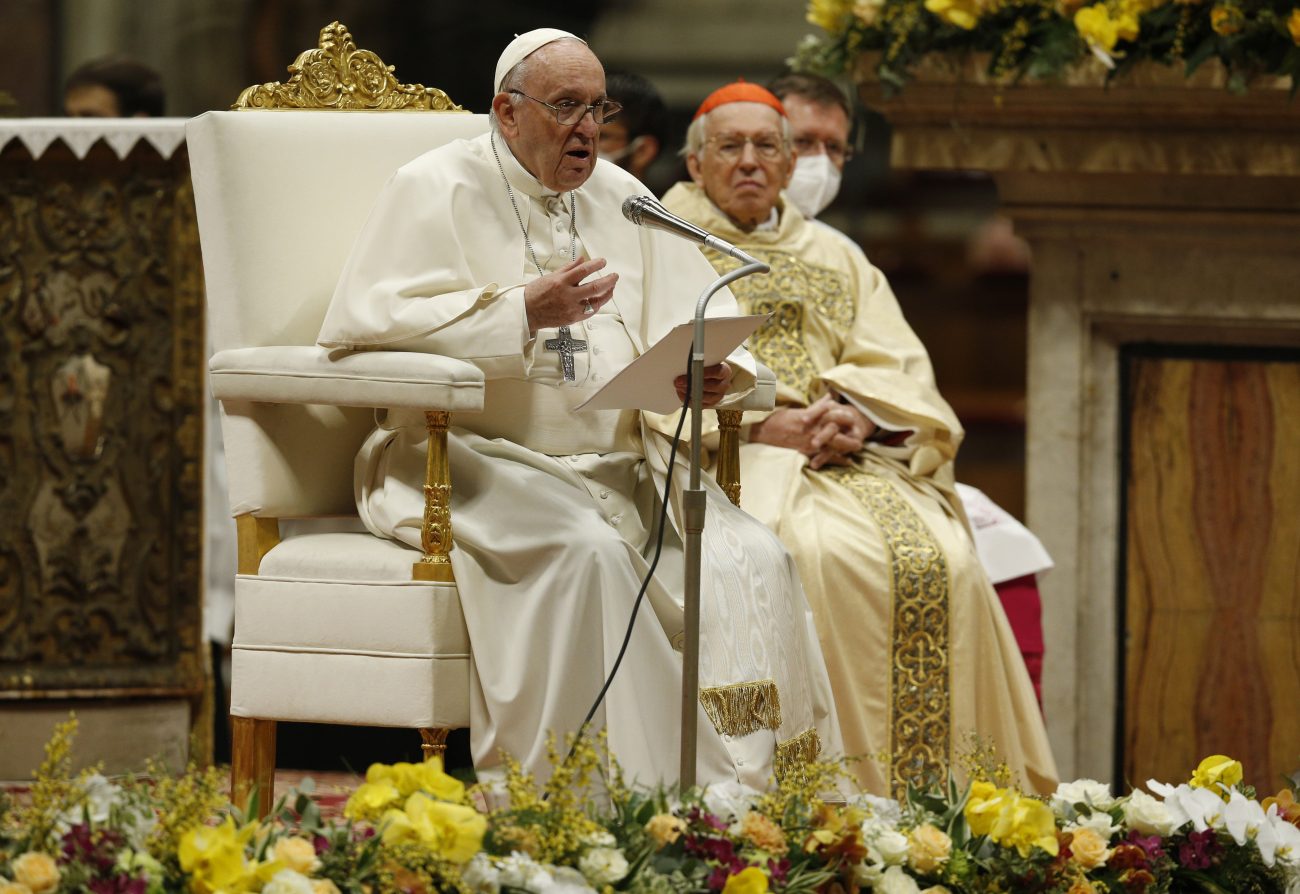 Pope Francis gives the homily as he attends the Easter Vigil celebrated by Cardinal Giovanni Battista Re in St. Peter's Basilica at the Vatican April 16, 2022. (CNS photo/Paul Haring)

VATICAN CITY (CNS) — The joy of Jesus’ resurrection from the dead gives joy and strength to those who are called to bring peace, reconciliation and justice to the suffering and the downtrodden, Pope Francis said.

“Let us make Jesus, the Living One, rise again from all those tombs in which we have sealed him,” the pope said in his homily April 16 during the Easter Vigil in St. Peter’s Basilica.

“Let us bring him into our everyday lives: through gestures of peace in these days marked by the horrors of war, through acts of reconciliation amid broken relationships, acts of compassion toward those in need, acts of justice amid situations of inequality and of truth in the midst of lies. And above all, through works of love and fraternity,” he said.

Cardinal Giovanni Battista Re, dean of the College of Cardinals, was the main celebrant at the Mass, and Pope Francis delivered his homily from a chair in front of the altar. While the Vatican gave no explanation why Pope Francis did not preside, he has had difficulty walking recently, and he recently told journalists he had a knee problem.

However, Pope Francis baptized and confirmed seven adults who were entering the Catholic Church. The five men and two women included an American man identified as Taylor Pescante, as well as four Italians, an Albanian and a Cuban.

At the end of his homily, Pope Francis directly addressed Ivan Federov, the elected mayor of the Russian-occupied city of Melitopol, Ukraine. Federov, who was captured and later released by the Russians in a prisoner exchange, was in Rome and met earlier in the day with Cardinal Pietro Parolin, Vatican secretary of state. 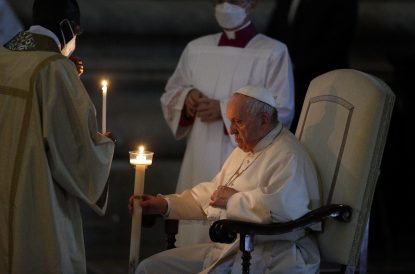 Pope Francis holds a candle as he attends the Easter Vigil celebrated by Cardinal Giovanni Battista Re in St. Peter’s Basilica at the Vatican April 16, 2022. (CNS photo/Paul Haring)

“We are all praying. We are praying for you and with you, we are praying for so much suffering,” the pope said in Italian. “We can only give you our accompaniment, our prayer and tell you, ‘Courage,’ and accompany you. And to also tell you the greatest thing that we celebrate today,” he said, switching to Ukrainian: “Christ is risen.”

According to the Vatican press office, before the vigil, the pope also met briefly with Federov as well as with representatives of “the local government and the parliament of the country.”

The vigil, the first open to the public in three years due to the COVID-19 pandemic, began in the atrium of St. Peter’s Basilica, with the blessing of the fire and lighting of the Easter candle. A deacon carried the candle into the semi-darkened basilica, lit Cardinal Re’s candle and began sharing the light with the thousands of people in the congregation.

Symbolizing Christ’s resurrection dispelling the darkness of death, little by little the basilica was filled with the light of the candles held by the estimated 5,500 people present. Seated in a white chair, the pope sat silently, holding a small lit candle.

In his homily, he reflected on the Gospel scene of the women going to Jesus’ tomb and what “they saw, they heard and they proclaimed.”

The women, he said, expected to find Jesus laid in his tomb and ready to be anointed. The empty tomb, however, not only subverts expectations but also “comes with the gift of a hope that surprises and amazes us,” though “it is not easy to welcome.”

“At times — we must admit — this hope does not find a place in our hearts. Like the women in the Gospel, we are overtaken by questions and doubts, and our first reaction before the unexpected sign is one of fear,” the pope explained.

People today, he continued, often “look at life and reality with downcast eyes” and “halt before the tomb of resignation and fatalism.” Nevertheless, Pope Francis said Jesus’ resurrection allows for all men and women to look at life through “different eyes” so that “we can make the leap from nothingness to life.”

“True, death can fill us with dread; it can paralyze us,” the pope said. “But the Lord is risen! Let us lift up our gaze, remove the veil of sadness and sorrow from our eyes, and open our hearts to the hope that God brings!”

Reflecting on the angel telling the women that Jesus was not there at the tomb, the pope said the angel’s words, “He is not here,” should be repeated often, especially when “we think we have understood everything there is to know about God” and “pigeonhole him in our own ideas and categories.”

Christians also should repeat the angel’s question to the women about why they sought the living among the dead, because it serves as a reminder that “we cannot celebrate Easter if we continue to be dead; if we remain prisoners of the past.”

Easter cannot be celebrated, he added, if “we reduce faith to a talisman, making God a lovely memory from times past, instead of encountering him today as the living God who desires to change us and to change our world.”

“A Christianity that seeks the Lord among the ruins of the past and encloses him in the tomb of habit is a Christianity without Easter,” he said.

The women proclaimed the joy of the resurrection not just “to console those who mourned the death of Jesus” but to “open hearts to the extraordinary message of God’s triumph over evil and death.”

The pope said that although they expected the disciples to “think they were mad,” the women “were not concerned for their reputation, for preserving their image; they did not contain their emotions or measure their words.”

“How beautiful is a church that can run this way through the streets of our world! Without fear, without schemes and stratagems, but solely with the desire to lead everyone to the joy of the Gospel,” Pope Francis said.

“That is what we are called to do: to experience the risen Christ and to share the experience with others; to roll away the stone from the tomb where we may have enclosed the Lord, in order to spread his joy in the world,” he said. 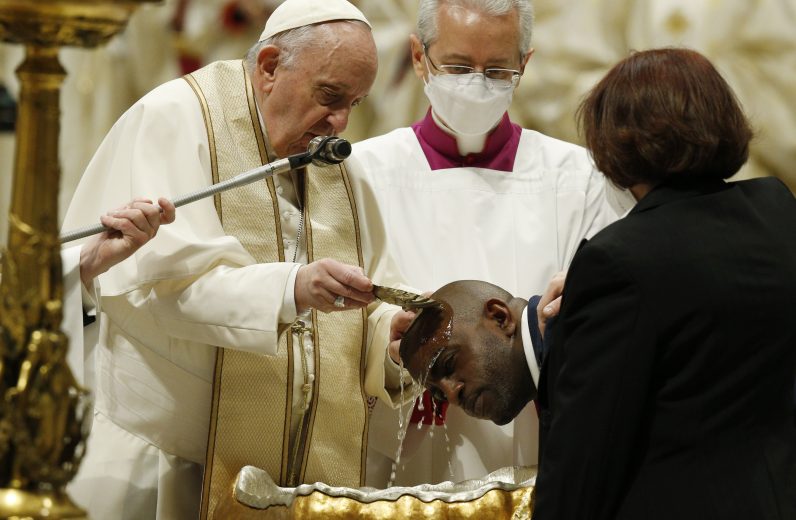 Pope Francis baptizes a new member of the church during the Easter Vigil celebrated by Cardinal Giovanni Battista Re in St. Peter’s Basilica at the Vatican April 16, 2022. (CNS photo/Paul Haring)

NEXT: Ukrainian Marine to pope: Mariupol ‘what hell on earth looks like’