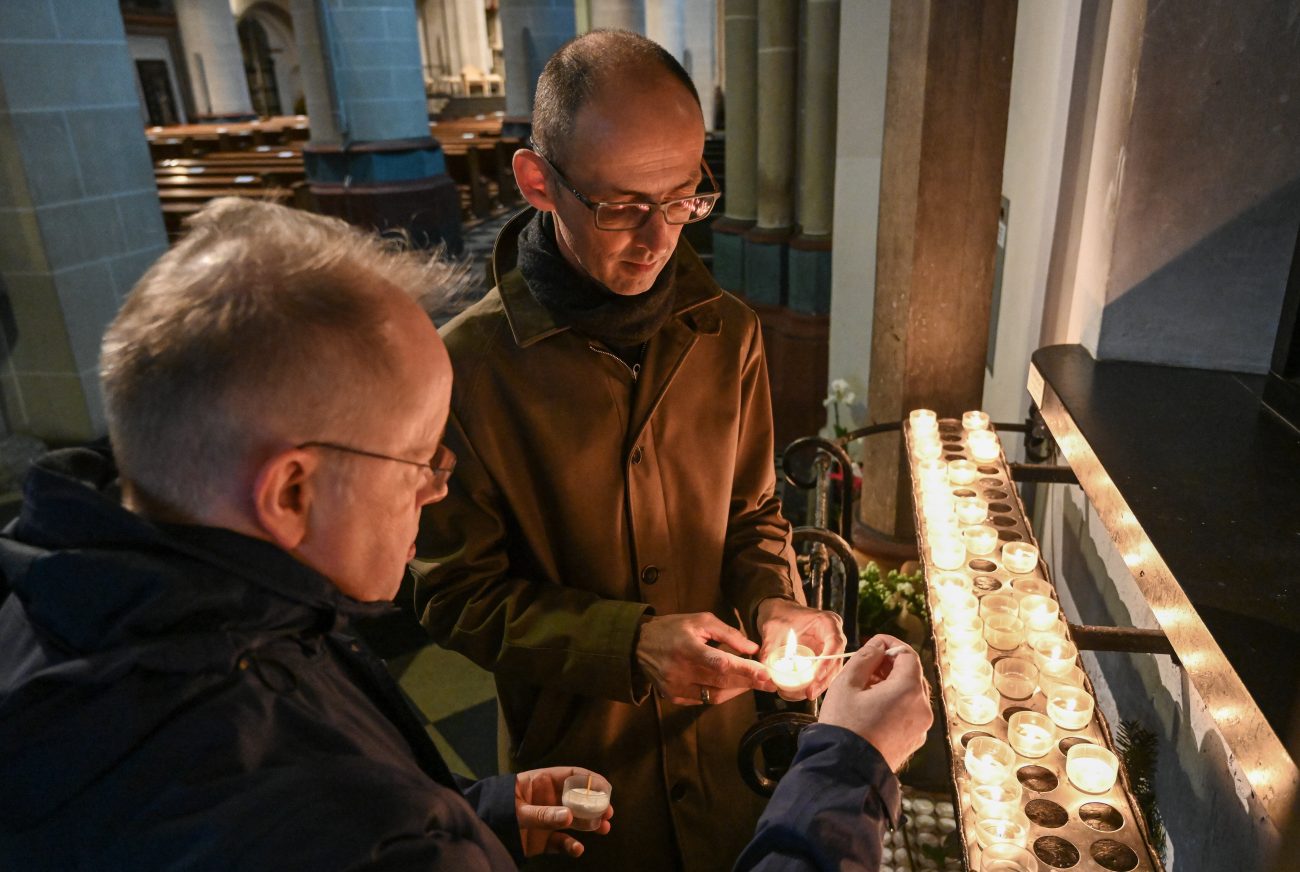 A gay couple light votive candles at a Catholic church in Essen, Germany, Oct. 30, 2021. "Homosexuality is not a sin. It corresponds to a Christian attitude when two people, regardless of gender, stand up for each other, in joy and sorrow," Munich Cardinal Reinhard Marx said in an interview published March 31, 2022. (CNS photo/Harald Oppitz, KNA)

“The catechism is not set in stone. One may also question what it says,” Cardinal Marx told the weekly magazine Stern in an interview published March 31.

“Homosexuality is not a sin. It corresponds to a Christian attitude when two people, regardless of gender, stand up for each other, in joy and sorrow,” he said. The value of love was also shown in “not making the other person an object, not using him or her or humiliating him or her.”

Cardinal Marx added: “LGBTQ+ people are part of creation and loved by God, and we are called upon to stand against discrimination.” He also said, “Those who threaten homosexuals and anyone else with hell have understood nothing.”

Earlier in March, at a Mass celebrating the 20th anniversary of “queer services” in Munich, Cardinal Marx apologized for the church’s discrimination against homosexuals. In his sermon, the cardinal promoted an “inclusive church.”

The cardinal told Stern that only 10 years ago he could not have imagined holding such a service.

“For years I have felt freer to say what I think, and I want to take church teaching forward,” he told the magazine.

The cardinal said these questions had already been discussed six years ago at the Synod of Bishops on the family at the Vatican. Even then he had said: “People live in an intimate loving relationship that also has a sexual form of expression. And we want to say that this is not worth anything?”

The archbishop admitted that he had blessed same-sex couples.

“A few years ago in Los Angeles, after a service, two came to ask for my blessing. So I did. It wasn’t a wedding ceremony. We can’t offer the sacrament of marriage.”

Cardinal Marx also indicated that it would not be easy to reach a consensus on the issue in the church.

“In Africa or in the Orthodox churches, there are completely different views in some quarters. It does people no good if we divide ourselves on this issue, but we mustn’t stand still, either.”

PREVIOUS: Pope apologizes for treatment of Indigenous in Canada

NEXT: In Malta, Pope Francis warns of spreading war, migration