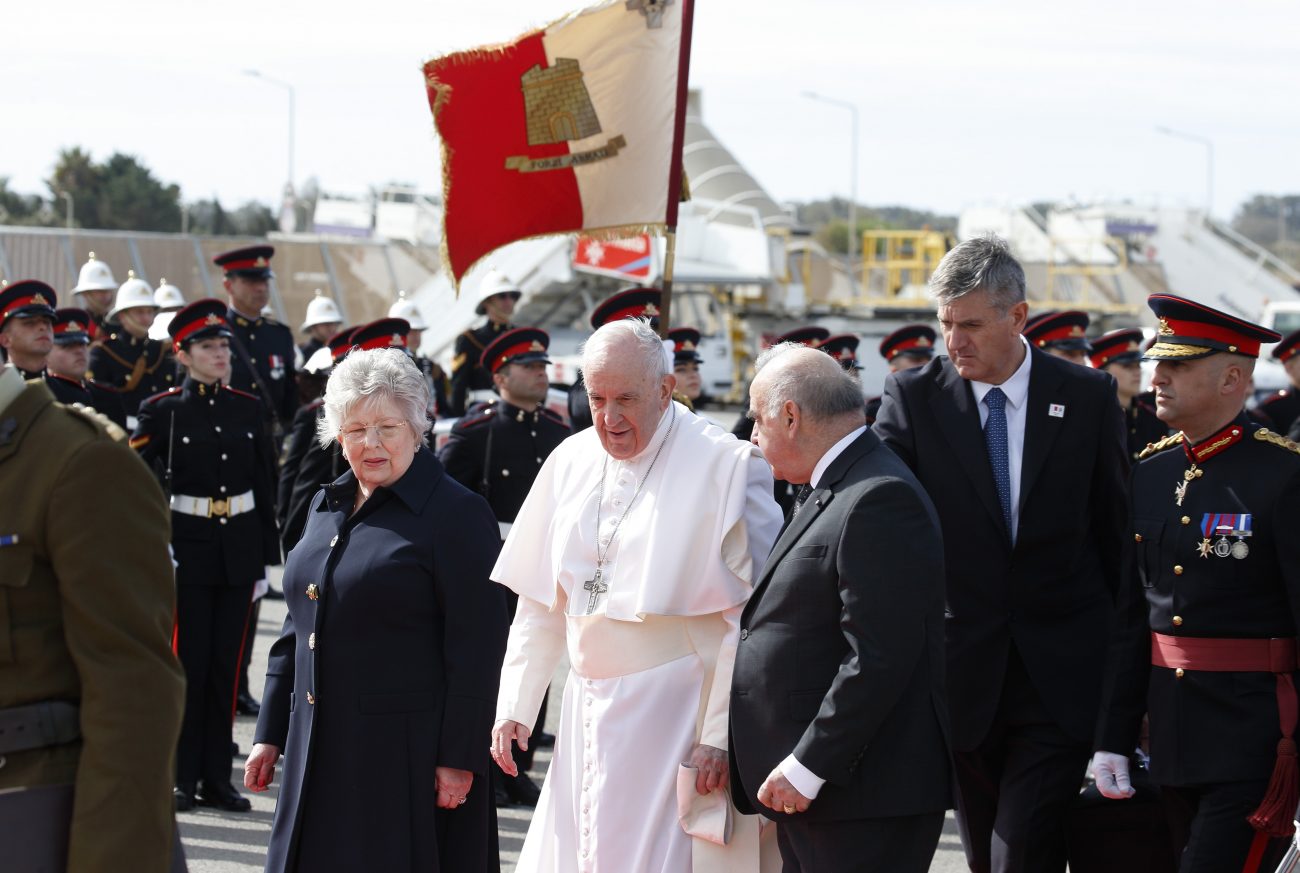 Pope Francis walks with Maltese President George Vella and his wife, Miriam, as he arrives at the international airport in Malta April 2, 2022. The pope was beginning a two-day trip to the Mediterranean archipelago. (CNS photo/Paul Haring)

VALLETTA, Malta (CNS) — Malta and its people must remember the country’s roots as the center of spirituality and welcome, especially to those most in need, Pope Francis told leaders of the Mediterranean nation.

As he started a two-day visit, the pope spoke to government and civil leaders and the diplomatic corps, praising them for welcoming migrants — especially those arriving on their shores from places like Lebanon, Syria and Yemen.

In a speech at the presidential palace April 2, Pope Francis said that while the influx of migrants in recent years has “nurtured a certain discouragement and frustration,” the issue of migration must “be situated within a broader context of time and space.”

“It brings with it the burden of past injustice, exploitation, climatic changes and tragic conflicts, whose effects are now making themselves felt,” he said. “From the poor and densely populated South, great numbers of people are moving to the wealthy North: This is a fact, and it cannot be ignored” by nations isolating themselves.

The additional influx of refugees in Europe from Ukraine, he added, is not only further proof of the need for “a broad-based and shared response,” but Russia’s war in Ukraine has brought the long-forgotten prospect of war back into the forefront.

“We had thought that invasions of other countries, savage street fighting and atomic threats were grim memories of a distant past,” the pope said. “However, the icy winds of war, which bring only death, destruction and hatred in their wake, have swept down powerfully upon the lives of many people and affected us all.”

Warning of the risk of an “enlarged Cold War,” the pope denounced “the infantile and destructive aggression” that threatens the world due to the “seductions of autocracy, new forms of imperialism” and “widespread aggressiveness.

“War has, in fact, been prepared for some time by great investments in weaponry and a massive trade in arms,” he added.

“But the solution to the crisis of each is care for those of all, since global problems require global solutions. Let us help one another to sense people’s yearning for peace,” the pope said.

Before departing for Malta, the Vatican said Pope Francis met with several refugee families from Ukraine who arrived in Rome in the past month after escaping Russia’s invasion.

At Rome’s Fiumicino airport, the pope was unable to take the stairway to board the airplane, due to apparent knee pain, but instead used a lift. Nevertheless, during the flight, the pope — who also suffers from sciatica — took some time to greet journalists individually.

When asked by one journalist if he was considering accepting Ukrainian President Volodymyr Zelenskyy’s invitation to visit Kyiv, the pope replied, “Yes, it is on the table.”

After the pope spoke with the Zelenskyy by phone March 22, Andrii Yurash, Ukrainian ambassador to the Holy See, tweeted that the pope was once again invited to visit the country.

Upon his arrival in Malta, the pope was welcomed by government and religious leaders, including Maltese President George Vella and Archbishop Charles Scicluna of Malta, president of Maltese bishops’ conference. People lined the streets to cheer and wave as the pope rode, standing, in the popemobile, from the airport to The Palace.

Pope Francis then met with privately with Vella as well as with Prime Minister Robert Abela before addressing the country’s authorities and diplomatic corps.

In his speech, the pope acknowledged the challenges of the migration crisis while urging leaders to seek ways that welcome those in need and without exploiting them.

“Some countries cannot respond to the entire problem, while others remain indifferent onlookers,” he said. “Civilized countries cannot approve for their own interest sordid agreements with criminals who enslave other human beings.

“The Mediterranean needs co-responsibility on the part of Europe, in order to become a new theater of solidarity and not the harbinger of a tragic shipwreck of civilization,” he added.

The pope expressed his gratitude for “that same warm hospitality” received by St. Paul, shipwrecked centuries ago, and called it “a treasure that the Maltese people have handed on from generation to generation.”

“For thousands of years, the interplay of historical events and the encounter of different peoples has made this island a center of vitality and of culture, spirituality and beauty, a crossroads that has received and harmonized influences from many parts of the world,” he said.

While praising Malta’s commitment to “defend life from its beginning to its natural end,” he also urged its leaders to remember the “rightful dignity of workers, the elderly and sick” as well as “those young people who risk squandering all the good they have within them by following mirages that leave only emptiness in their wake.”

“May Malta, the heart of the Mediterranean, continue to foster the heartbeat of hope, care for life, acceptance of others, yearning for peace, with the help of the God whose name is peace,” Pope Francis said.

Later that day, Pope Francis was to travel by catamaran to Gozo and pray at the Ta’ Pinu National Shrine. His schedule April 3 included an outdoor Mass and a meeting with migrants.

NEXT: Pope says he hasn’t spoken directly to Putin about Ukraine war