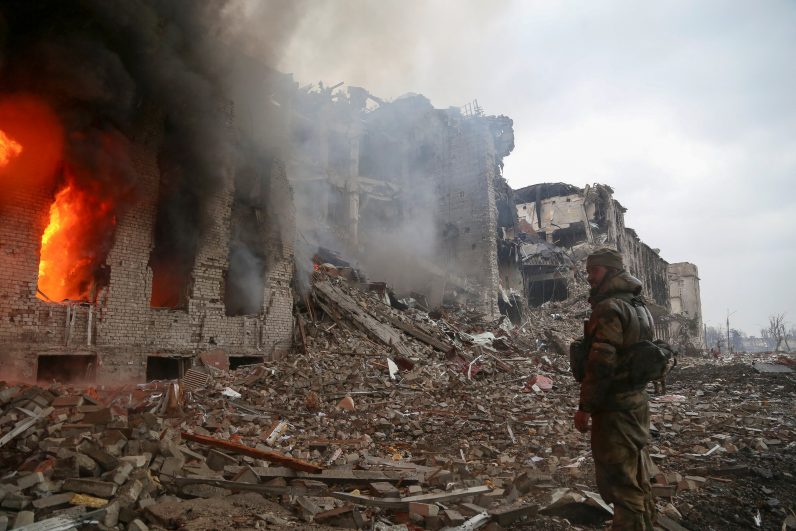 A service member of pro-Russian troops stands in front of the destroyed administration building of Azovstal iron and steel works in Mariupol, Ukraine, April 21, 2022. Many Ukrainians are holed up in the plant, taking shelter from Russian shelling. (CNS photo/Chingis Kondarov, Reuters)

VATICAN CITY (CNS) — The Vatican will never stop its diplomatic efforts to mediate an end to the war against Ukraine, Pope Francis said.

However, the meeting between the pope and Russian Orthodox Patriarch Kirill of Moscow planned for June has been canceled out of concern it could cause “confusion,” and there will be no papal visit to Kyiv while war rages, the pope said in an interview with the Argentine daily newspaper La Nación April 21.

Pope Francis told reporters April 2 he was considering a possible visit to the Ukrainian capital. But in his latest interview, he told La Nación that “I cannot do anything that puts higher objectives at risk, which are the end of the war, a truce or, at least, a humanitarian corridor.”

“What good would it do for the pope to go to Kyiv if the war were to continue the next day?” he said.

When asked about  Patriarch Kirill, Pope Francis said, “I am sorry that the Vatican has had to suspend a second meeting with Patriarch Kirill, which we had scheduled for June in Jerusalem.” Their first meeting had been in 2016 in Havana, the first time the pope and Moscow patriarch had met personally.

He explained that the Vatican’s diplomatic team understood that such a meeting “at this time could lead to much confusion.” Personally, he said he seeks to promote fruitful interreligious dialogue because mutual understanding or agreement “is better than conflict.”

Cardinal Pietro Parolin, Vatican secretary of state, had confirmed April 7 that Pope Francis wanted to meet with Patriarch Kirill in a “neutral place,” but that the patriarch’s support for Russian President Vladimir Putin and his war on Ukraine could make a meeting inadvisable.

In early March, soon after the invasion, Cardinal Parolin had told the Italian news agency ANSA, “Kirill’s words do not favor and do not promote an understanding, on the contrary, they risk igniting tempers even more and going toward an escalation and not resolving the crisis peacefully.” 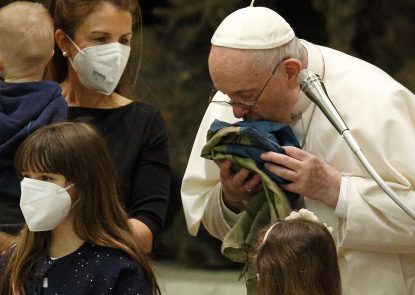 Pope Francis kisses a Ukrainian national flag from Bucha as he meets Ukrainian refugees during his general audience in the Paul VI hall at the Vatican April 6, 2022. The pope told the Argentine newspaper La Nación there will be no papal visit to Ukraine while war rages. (CNS photo/Paul Haring)

Meanwhile, Metropolitan Hilarion of Volokolamsk, head of external relations for the Russian Orthodox Church, told reporters April 22 that “the events of the past two months necessitated adjustments to the plans and postponement of the meeting.”

“Too many problems would now arise during its preparations” in terms of security, logistics, coverage of the meeting in the public space, he said, according to Interfax. “We will wait for a better time for this event.”

Pope Francis told La Nación that he is willing “to do everything” to end the bloodshed.

He said he decided to visit the Russian ambassador to the Holy See Feb. 25 on his own accord after a sleepless night “thinking about Ukraine.”

“I went alone. I didn’t want anyone to accompany me” on a visit he felt was due out of a sense of his own personal responsibility.

He said the visit was a clear indication “to the government that it can end the war” at any moment. “To be honest, I would like to do something so that there will not be even one more death in Ukraine. Not one more. And I am willing to do everything.”

The pope also discussed the problem with his knee, explaining his limited mobility and pronounced limp are due to a torn ligament.

“It will pass,” he said, adding that doctors have told him recovery is a long, slow process for a person his age.

Meanwhile, the pope canceled appointments listed on his schedule April 22. Matteo Bruni, head of the Vatican press office, said it was due to “medical checkups that are necessary today.”

NEXT: Pope calls for truce, end to ‘barbarity of war’ in Ukraine