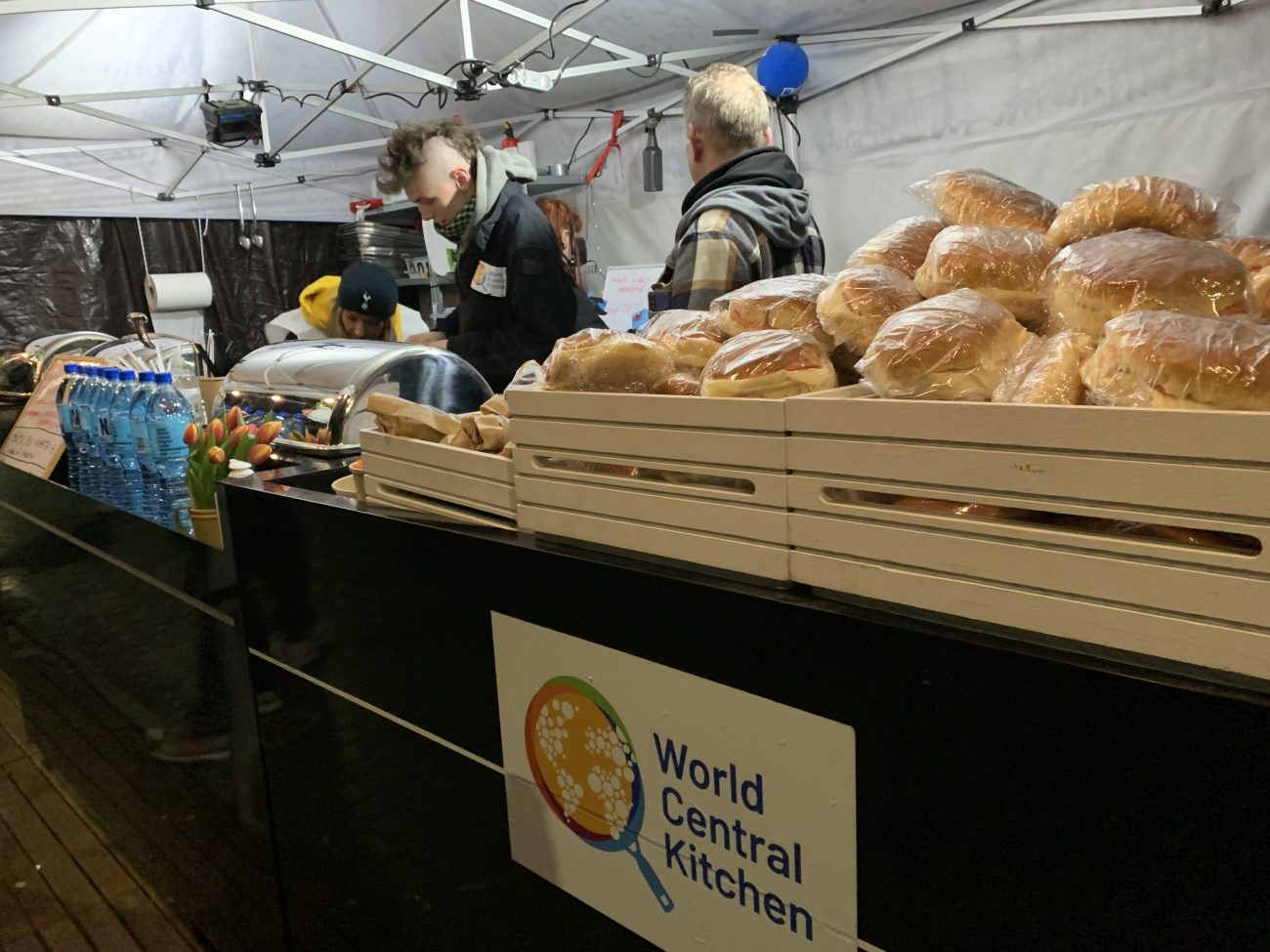 Volunteers have sandwiches, soup, salads and drinks ready for Ukrainians crossing the border into Poland at Medyka April 21, 2022. While the number of refugees arriving at the crossing declined in late April, volunteers, including those from the World Central Kitchen, founded in 2010 by celebrity chef José Andrés, continue to staff tents at the Medyka border crossing. (CNS photo/Cindy Wooden)

“I say, ‘Thank you for your admiration, but we need your help,'” said Pawel Szefernaker, Poland’s deputy minister of the interior who, since April 1, has been in charge of the government’s program for war refugees from Ukraine.

The national government, local governments, social organizations, including Caritas Poland, and ordinary citizens are working hard to avoid the creation of refugee camps and a humanitarian crisis, he said. “Solidarity and support from other European Union countries is necessary, and we are appealing for it.”

“If we would have waited for help from other EU countries, we would have had a catastrophe on the border,” he said April 21 during an interview in his office.

Szefernaker said more than 2.8 million Ukrainians had entered Poland since Russia invaded Ukraine Feb. 24, and his office estimates that about 1.6 million of them plan to stay until they know it is safe to return home.

The situation is complicated and ever-changing, he said. While the U.N. Refugee Agency said April 20 that close to 1 million of the 5 million Ukrainians who left their homeland had returned, Poland is expecting another wave of arrivals as fighting continues or intensifies.

Szefernaker, 35, knows many Westerners thought Poland was anti-immigrant and maybe even xenophobic or racist, given the government’s rejection of tens of thousands of migrants from the Middle East and Asia trying to cross the border from Belarus in late 2021 and early 2022.

The European Union, NATO and the United States have said Belarusian President Alexander Lukashenko recruited the migrants and refugees, promising them access to Europe, specifically to provoke a crisis in revenge for sanctions leveled against his government by the European Union after a harsh crackdown on protesters in 2020.

Poland could not open border crossings with Belarus because the migrants were not war refugees, but immigrants who were trying to enter the European Union illegally, Szefernaker said.

Lukashenko’s government, he said, drove the migrants and refugees to the border, but not to border crossings where their documents and identities could be checked.

Poland also was criticized for housing Ukrainian refugees separate from people from Africa and Asia who had fled Ukraine when the shelling and bombardment started.

In late February when the war began, he said, “there were many citizens of third countries — and this was a surprise.” Most of them were men, who either were studying in Ukraine or were blue-collar workers.

That decision, Szefernaker said, led to accusations in the media that Ukraine was discriminating against the non-Ukrainians.

At this point, he said, most of the third-country nationals have left Poland, either going home on special flights organized by their governments or moving on to other European countries.

As for the Roma who fled Ukraine, he said, he knows many were welcomed into Polish Roma communities, but the government does not have statistics on how many came from Ukraine because they belong to an ethnic group, not a nationality with its own passports.

The Polish government estimated April 20 that there were between 1.6 million and 2 million Ukrainians currently in Poland, he said; about 600,000 of them are being hosted in private homes; 300,000 are in private or government-run shelters and the rest are renting their own accommodations.

While outsiders may be surprised at the generosity of the Polish people, Szefernaker said he is not.

“We are aware it is an investment in our security,” he said. “Ukrainians today are fighting for our security.”

Second, he said, “our national pride is solidarity,” which was not just the name of the labor movement that helped bring down communism.

Solidarity and the protection of the family are values Poles cherish, he said.

“I am convinced that this challenge that the Poles have taken up reflects universal values that are based in our Christian roots, which is perhaps why other Western countries are so surprised,” Szefernaker said. “No matter what political party you belong to or whether or not you go to church, these values are still important to our nation.”

NEXT: Pope says no trip to Kyiv, cancels meeting with Russian patriarch