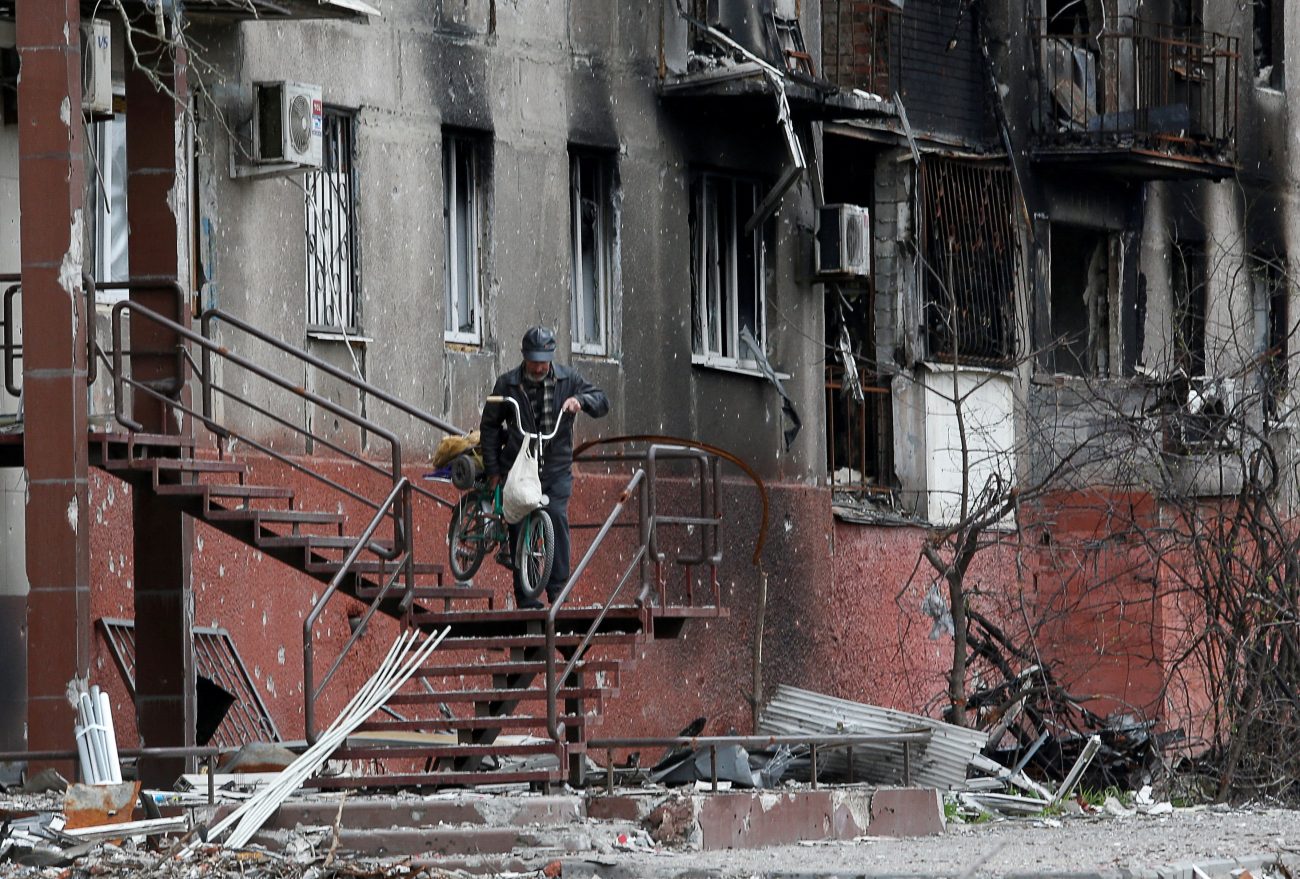 A man walks down the stairs outside a residential building damaged by Russian shelling in Mariupol, Ukraine, April 21, 2022. (CNS photo/Alexander Ermochenko, Reuters)

LVIV, Ukraine (CNS) — The Ukrainian Council of Churches and Religious Organizations called on every Russian religious figure, regardless of confessional affiliation, to make public and private requests to Russian authorities to organize the evacuation of civilians and wounded defenders of Mariupol.

It also called for an internationally supervised evacuation of Mariupol, which Russia almost totally controls. In an appeal issued April 22, the council also proposed a prisoner exchange of Ukrainian soldiers for Russian soldiers.

Separately, the spokesman for Metropolitan Onufriy, head of the Ukrainian Orthodox Church associated with Moscow, said April 22 that his church was prepared to organize a prayer procession from the town of Orikhiv to the Azovstal iron and steel works to provide emergency assistance and evacuate civilians sheltering there. The metropolitan said the procession could also remove the bodies of the dead.

The Ukrainian Council of Churches statement said: “Currently, tens of thousands of civilians in Mariupol are on the verge of (death). Many of them have found shelter at the Azovstal plant, where they are hiding from constant shelling and bombing. Among them are children, women, and the elderly, as well as many sick and wounded people who need urgent medical care. They do not have food, water, hygiene products, and necessary medicines due to the lack of a humanitarian corridor and the impossibility of evacuation. Their lives can end at any moment if nobody stands up for them right now!”

The council said Ukrainians from Mariupol should be taken to territory controlled by Ukraine. Ukrainians have accused Russians of taking hundreds of thousands of people from captured cities to Russia.

“On these holy days for most believers — the celebration of Easter, Passover, and Ramadan — we call on everyone to make every possible effort to save the lives of thousands of civilians in Mariupol who are under blockade and need immediate evacuation,” said the council appeal.

April 22 is Good Friday on the Julian calendar, which most Ukrainians follow, and Archbishop Sviatoslav Shevchuk, major archbishop of the Ukrainian Catholic Church, compared the Ukraine situation to Jesus’ passion.

“In the Lord’s tomb we see the mass graves of Bucha, Irpin, Borodyanka, Mariupol …. Each of us has a picture of the Ukrainian Golgotha in our eyes. We are being killed today. In the wounds of Christ, we see the wounded mutilated bodies of the sons and daughters of Ukraine.”

Mariupol has been under siege since March 1, and the Russians are constantly shelling it, trying to take full control of the city, part of an effort to control the Donbas region of Ukraine and link Russia with the Crimean Peninsula, which it annexed in 2014.

Meanwhile, the press service of the Mariupol City Council reported between 3,000 and 9,000 civilians killed by Russians may be buried in a mass grave discovered in the village of Manhush, just outside Mariupol. They said that number was reached after comparing images of burial sites in Bucha, where 70 bodies were found.

In Manhush, “the occupiers had been digging new trenches, filling it with bodies every day throughout April. Our sources say that in such graves the bodies are put in several layers,” said the city council statement sent out on the Telegram app.

Estimates put the total number of those killed by the Russian army in Mariupol at 22,000.