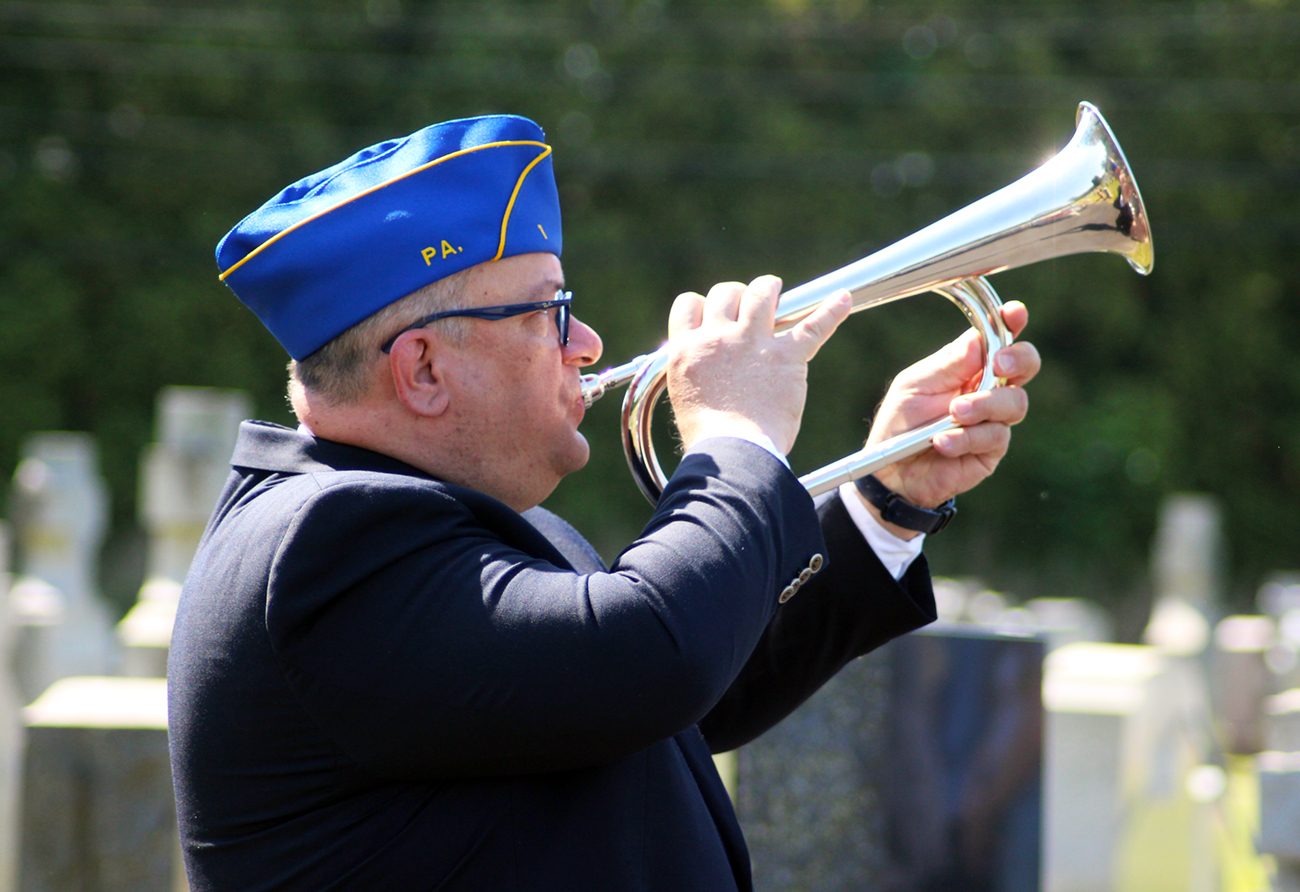 A member of the Ukrainian American Veterans Post 1 plays "Taps" during a Memorial Day prayer service at St. Mary Ukrainian Catholic Cemetery in Jenkintown, May 30.

As war rages in Ukraine, local Ukrainian Catholic clergy led prayers at the graves of Ukrainian-American veterans on Memorial Day.

Some two dozen gathered May 30 at St. Mary Ukrainian Catholic Cemetery in Jenkintown for a panakhyda, a short liturgy for the dead.

(See a photo gallery from the Memorial Day prayer service.)

The service was led by Father Roman Pitula, rector of the Ukrainian Catholic Cathedral of the Immaculate Conception, and Father John Ciurpita, chaplain of the Sisters of St. Basil the Great, the Ukrainian women religious congregation that founded Manor College, adjacent to the cemetery.

Praying in both Ukrainian and English, the priests interceded for “the repose of the souls who lost their lives in defense of our country, and for all those … soldiers who have fallen asleep,” as well as “the forgiveness of their offenses, voluntary and involuntary.”

Father Pitula described them as “martyrs who had laid down their lives” in defense of the U.S., “that we and future generations could be here … praying for them,” urging those present to “never forget what they have done for us.”

Members of the Ukrainian American Veterans (UAV) Post 1 provided an honor guard, with a four-gun salute and the performance of “Taps” on bugle. Post Commander Ed Zetick read the names of UAV members who had passed away within the last 18 months.

Amid the solemnities, clergy and veterans alike expressed shock at the resurgence of full-scale war in Europe, where the most recent Russian invasion of Ukraine has killed thousands – including infants and children — while displacing more than 14 million. 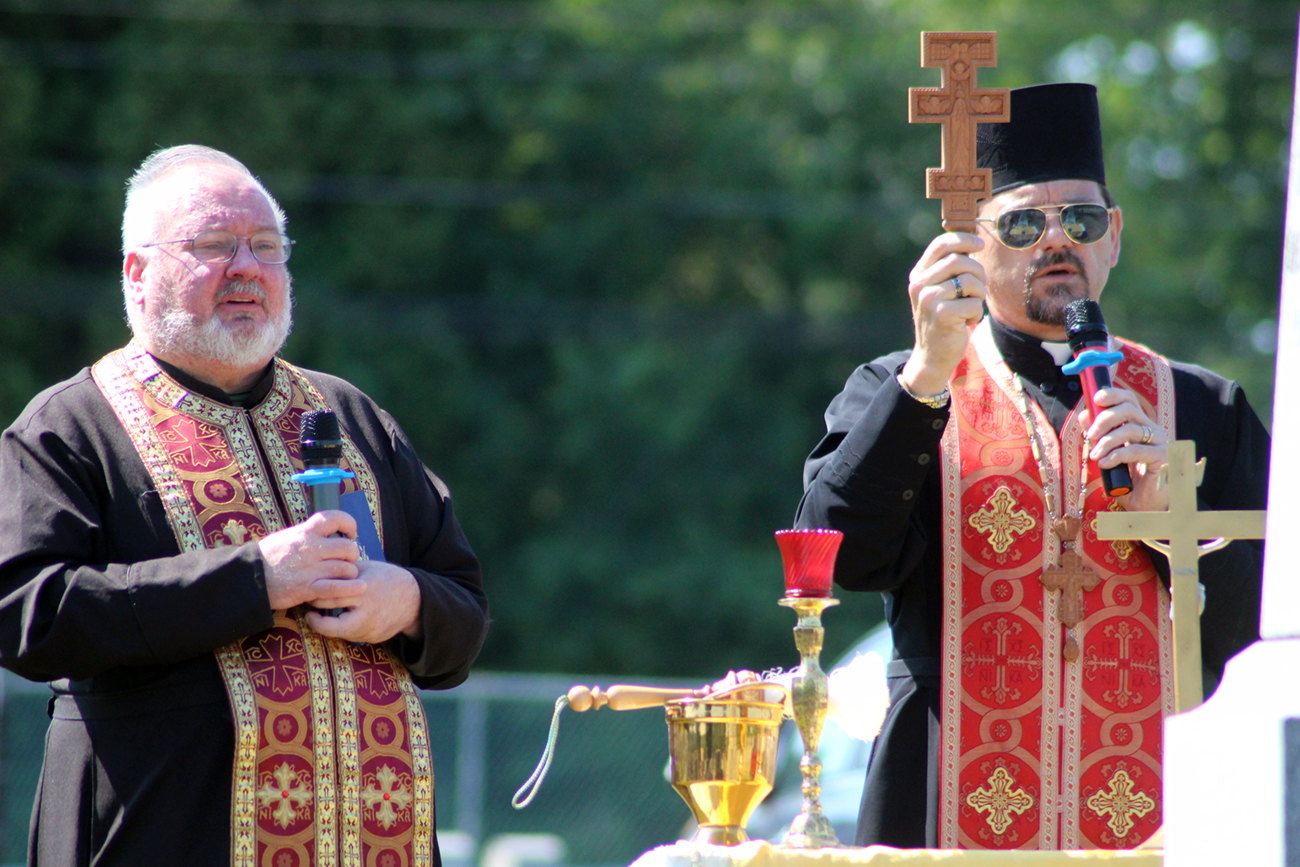 “In the 21st century, we should not be experiencing any wars,” said Father Pitula, a native of Stryj in Ukraine’s Lviv region. “We had enough in the previous century with two world wars. It looks like we didn’t learn any lessons.”

“I never thought that I would start my life and end my life on such a note,” said UAV member and Ukraine native Eugene Zyblikewycz, who served in the U.S. Army. “It’s a tragedy.”

Russia’s recent invasion of Ukraine — which continues military attacks it launched in 2014, with the attempted annexation of Crimea and the backing of separatist regions in Donetsk and Luhansk – has been marked by particularly gruesome violence against civilians, prompting multinational calls for war crimes investigations.

Archbishop Borys Gudziak, metropolitan for Ukrainian Catholics in the U.S., said during a recent visit to an archdiocesan high school that “some 200 young lives” if not more are now being lost each day amid the fighting.

While the Kremlin has baselessly insisted its invasion is an attempt to rid Ukraine of neo-Nazis, UAV member and Army veteran John Rittenhouse Hill said “the real Nazi is (Russian president Vladimir) Putin.”

“All the things he’s doing, Hitler did before,” said Hill. 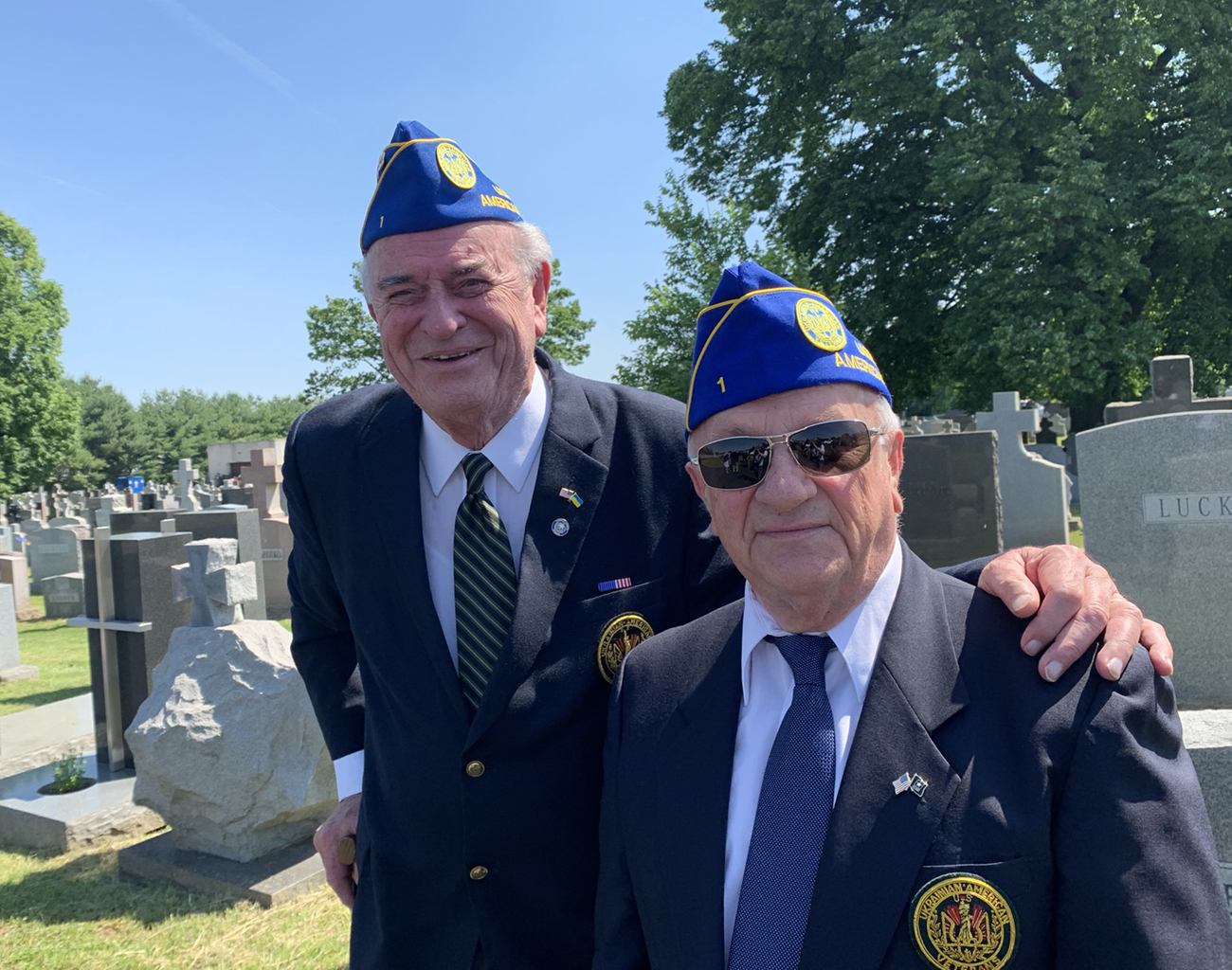 He and Zyblikewycz said Russian aggression against Ukraine is both longstanding and genocidal.

As an example, he pointed to the Holodomor, an artificial famine created by Soviet Union premier Joseph Stalin that starved anywhere from 4 to 6.5 million Ukrainians between 1932 and 1933.

“That was all intended to get rid of the Ukrainians and to bring genocide,” said Hill.

A May 26 report released by the New Lines Institute for Strategy and Policy and the Raoul Wallenberg Center for Human Rights concluded that Russia has breached the 1948 Genocide Convention, “triggering States’ duty to prevent” genocide under Article I of that document, said the authors.

Both the Russian Federation and the United States are signatories of the convention, which the latter only ratified in 1988 under President Ronald Reagan, 40 years after its unanimous adoption by the U.N. General Assembly.

The two superpowers were also signatories of the 1994 Budapest Memorandum, through which Ukraine voluntarily forfeited its nuclear arsenal – the third largest in the world at the time – as the U.S., Russia and Britain pledged “to respect the independence and sovereignty and the existing borders or Ukraine” and “to refrain from the threat or use of force” against Ukraine.

Hill and Zyblikewycz said signing the agreement was a mistake for Ukraine, with the latter adding that “a lot of countries let their guard down” as the millennium approached.

Russia’s latest assault on Ukraine has provided a severe rebuke against geopolitical complacency, said both clergy and veterans.

Hill and Zyblikewycz said they expect Russia to take aim at surrounding nations, while Father Pitula said “Putin will not stop in Ukraine” since the battle is about far more than just national boundaries.

Along with international efforts to assist Ukraine, he said, faithful must seek to “do whatever we can in our position to work for peace and to pray for peace” in everyday interactions.

“We are here to be witnesses to the Good News,” said Father Pitula. 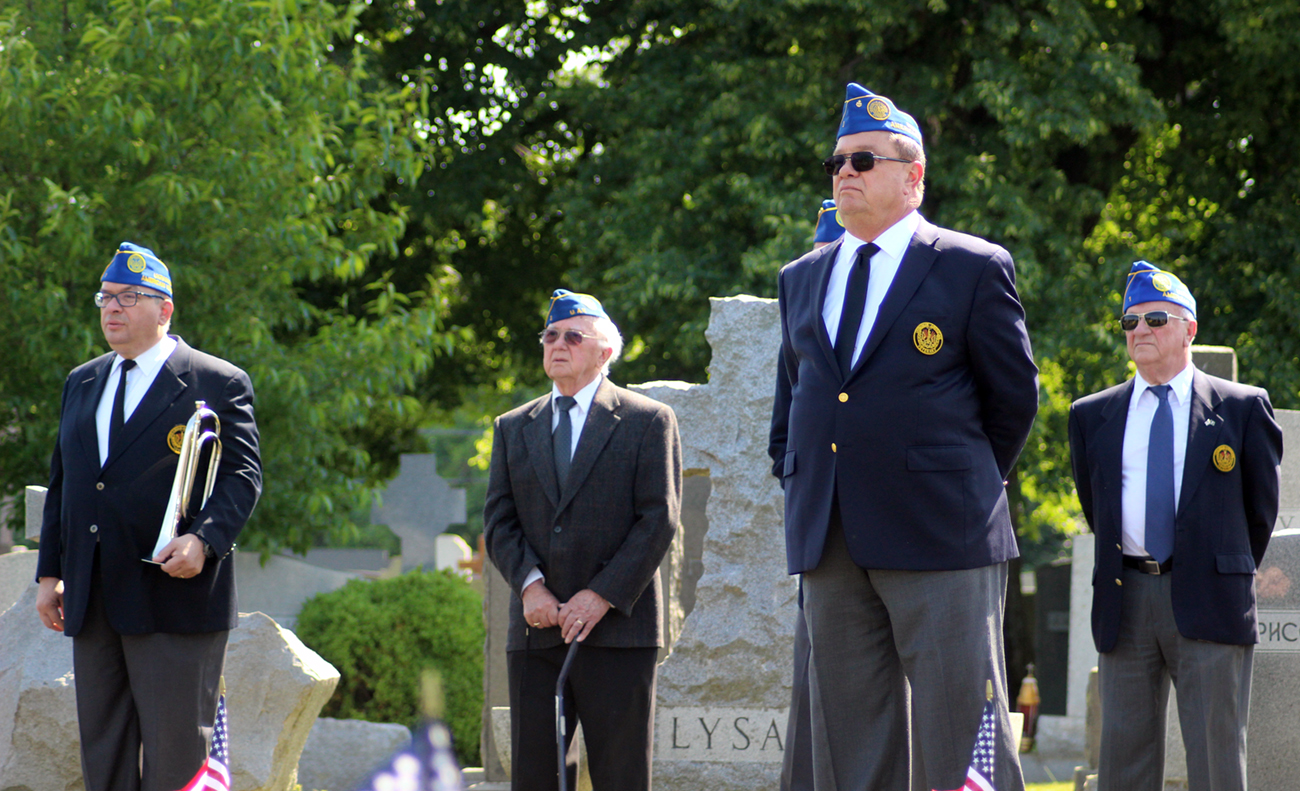