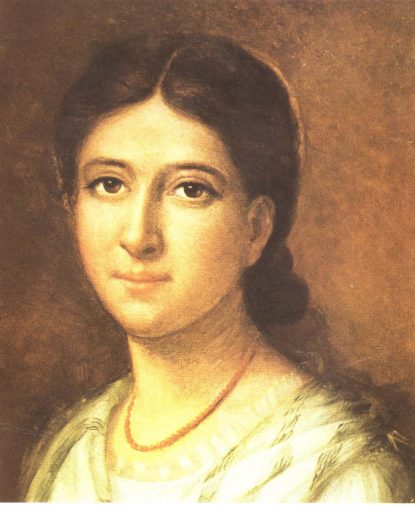 This is a portrait of Pauline Jaricot. In 1822, the young and rich French woman founded the Society for the Propagation of the Faith. (CNS photo/courtesy Pontifical Mission Societies in the United States)

WASHINGTON (CNS) — In 1822, a young and rich French woman, Pauline Jaricot, founded the Society for the Propagation of the Faith.

In 2022, this international association that coordinates assistance for Catholic missionary priests, brothers, and nuns in mission areas, is still going strong and renewed attention has been given to its founder, who will be beatified May 22.

Born in Lyon, France, in 1799, Jaricot was the youngest of seven children. At age 17, while recuperating from a serious fall, her mother died. Jaricot then led a life of intense prayer, and on Christmas 1816, took a vow of perpetual virginity.

Jaricot first founded an association for pious servant girls, the Repairers of the Sacred Heart of Jesus Christ. While her brother, Phileas, was studying to be a missionary priest, she felt an urge to help the missionary cause. So, in 1822, with the help of workers at the family’s silk factory, she established the Society for the Propagation of the Faith.

She encouraged each participant to invite 10 other people to pray and make contributions which was dubbed the “circle of 10.”

“Pauline had a vision of two lamps. One lamp was empty and the other lamp was full and filling up the other lamp,” said Monica Yehle, chief of staff for the Pontifical Mission Societies in the United States. “She saw the empty lamp as France after the revolution.” She wanted to rebuild the strength of the church in France just a few decades after the French Revolution.

“She wanted to do something, right? So she sent to the circles of 10 a sous — equivalent to a penny — for the work of the church,” Yehle said.

In 1826, while fostering the growth of the society supporting missionary work, Jaricot  also founded the Association of the Living Rosary. Instead of organizing by tens, she assembled groups of 15 — one for each decades of three “mysteries” of the rosary at that time. By 1832, Pope Gregory XVI gave canonical status to the latter organization.

In 1835, Jaricot became severely ill again, and while heading toward a pilgrimage in Italy, she was healed. She attributed the cure to St. Philomena.

In 1845, she set out to practice Christian social reform by buying a blast furnace plant, with workers and their families living in an adjacent building, with a school and chapel nearby. She left the management to people who defrauded her and left her virtually penniless. She declared bankruptcy but preached forgiveness to those who had bilked her. Jaricot died destitute in 1862.

But what she started bore many fruits.

The United States, which got all of $6 from the society in its first contribution, now accounts for 25% of all donations to its current work. By 1908, the church in the United States had grown so vigorous that it was decided that it was no longer missionary territory.

The last U.S. diocese still receiving funds from the society is the Diocese of Fairbanks, Alaska — and this is the final year of society contributions, according to Father Kieran Harrington, director of the Pontifical Mission Societies of the United States.

In May 3, 1922, a century after its founding, Pope Pius XI declared the Society for the Propagation of the Faith “pontifical.” There are three international groups with the “pontifical” designation: the Missionary Childhood Association, the Society of St. Peter Apostle, and the Missionary Union. The first two were also founded in France and raise funds for the church.

Since 1935, Jaricot’s remains are in St. Nizier Church in Lyon.

On Feb. 25, 1963, a century after her death, St. John XXIII declared Jaricot venerable.

In 1995, during the worst of the Rwandan Hutu-Tutsi civil war, a parish church in Rwanda gave $81 to the World Mission Sunday collection, which is held on the next-to-last Sunday in October.

In November 1997 — the 175th anniversary of the Society for the Propagation of the Faith, during a Mass in conjunction with the U.S. bishops’ annual fall meeting, Auxiliary Bishop John J. McCormack of New York praised the work of Jaricot, saying her work is still in need today.

“We know that God, in a way known to him, helps those to be saved who, through no fault of their own, do not hear the Gospel and see it lived,” Bishop McCormack said. “But will God help us if we neglect to do all that we can to make it possible for them to hear and to see the truth, the truth who is Jesus Christ?”

Then there is the matter of the miracle.

Mayline Tran had been in painful agony for two years. But her intercession with Jaricot resulted in what she describes as a miraculous recovery in 2012. Her doctor, stunned by the reversal of her condition, was dumbstruck to learn she was going to middle school. The girl’s brain waves, a jumble in the wake of the accident that nearly killed her, were once again normal.

The file was presented he case to the archbishop of Lyon in late 2017. On May 26, 2020, Pope Francis authorized the Congregation for the Causes of Saints to promulgate a decree recognizing a miracle attributed to Jaricot’s intercession.

The May 22 beatification will be in Lyon, with Filipino Cardinal Luis Antonio Tagle presiding on the pope’s behalf.

An “EWTN Live” episode about Pauline Jaricot –that starts at about the 8-minite mark — can be seen here.

Read the story of the miracle linked to her intercession.