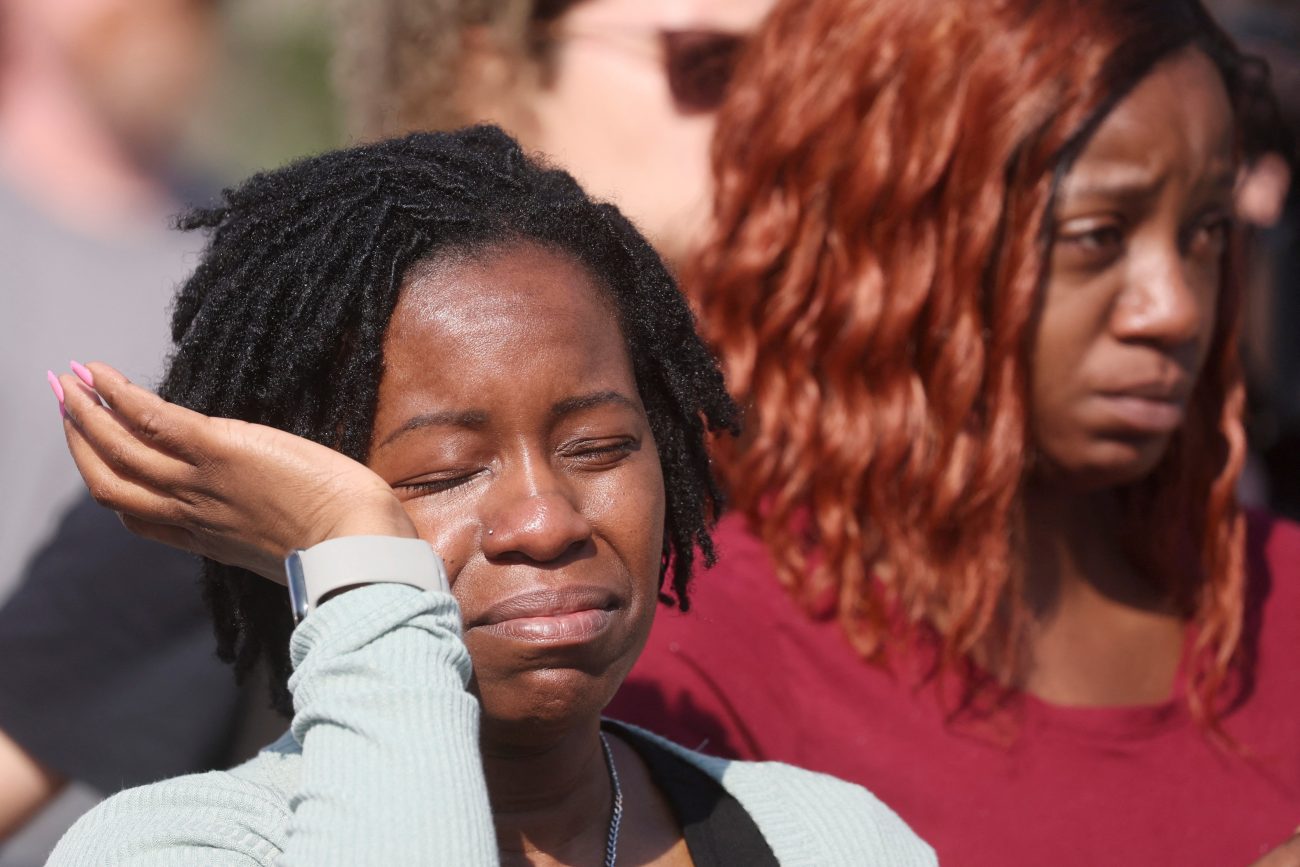 A mourner in Buffalo, N.Y., reacts while attending a May 15, 2022, vigil for victims of the shooting a day earlier at a TOPS supermarket. Authorities say the mass shooting that left 10 people dead was racially motivated. (CNS photo/Brendan McDermid, Reuters)

WASHINGTON (CNS) — Several U.S. Catholic bishops expressed sorrow and called out racism and gun violence after reports of a May 14 mass shooting in Buffalo, New York, that left at least three injured and 10 dead — a crime authorities categorized as likely motivated by hatred for Black people.

In a separate shooting at a Presbyterian church in Laguna Woods, California, May 15, a gunman killed one person and wounded five. The suspect in that shooting was targeting members of the Taiwanese community, Orange County officials said.

In one of the most powerful statements condemning the violence that took place when a gunman opened fire on a Saturday afternoon at a supermarket in Buffalo, Bishop Mark J. Seitz of El Paso, Texas, said May 15, “Faith compels us to say no to the rotten forces of racism, no to terror, and no to the mortal silencing of Black and brown voices.”

Bishop Mark E. Brennan of Wheeling-Charleston, West Virginia, also spoke up against what has been categorized not just as violence but one colored with chilling racism.

“The tragedy in Buffalo is hardly the first such violence against African Americans,” he wrote shortly after the attack. “From the crossing of the ocean in slave ships, in which many Africans died, to their violent treatment by slave masters to the thousands of lynching of Blacks in the South to more recent killings of unarmed African Americans by police and civilians, even in their churches, this racism has claimed an inordinate number of Black lives simply because they were Black. When and how will it stop?”

Responding to both incidents, Chieko Noguchi, director of public affairs for the U.S. Conference of Catholic Bishops, said the U.S. bishops were calling for an honest dialogue “addressing the persistent evil of racism in our country.”

“The Catholic Church has been a consistent voice for rational yet effective forms of regulation of dangerous weapons, and the USCCB continues to advocate for an end to violence, and for the respect and dignity of all lives,” she said. “We pray for and support the healing of the communities impacted and for all the victims of violence and that Christ’s peace be upon all affected.” 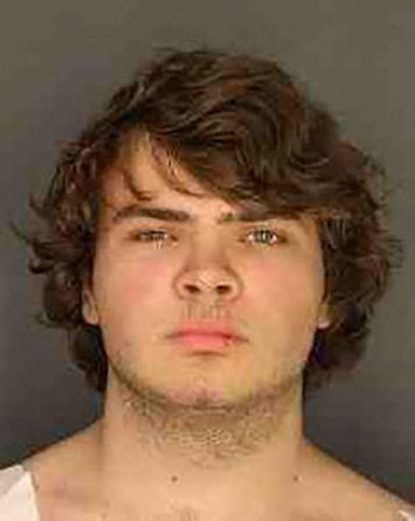 In Buffalo, Erie County District Attorney John J. Flynn said in a May 14 statement that 18-year-old suspect Payton S. Gendron, of Conklin, New York, “who was allegedly wearing tactical gear and armed with an assault weapon” when he entered the supermarket at around 2:30 p.m., has been charged with first-degree murder and remains in custody without bail.

Some of those fatally wounded include a retired Buffalo police officer working security at the store, an 85-year-old grandmother of eight who cared for her husband and a 72-year-old civil rights advocate.

“My office is working closely with the U.S. Attorney’s Office and our partners in law enforcement into potential terrorism and hate crimes,” Flynn said. “This is an active investigation and additional charges may be filed.”

Gendron is scheduled for a hearing May 19.

News reports said authorities have pointed to a 180-page online document the suspect is alleged to have left behind, filled with racist views and details of his plan of attack. There also are reports that he strapped equipment to the top of a tactical helmet he was wearing so he could livestream the shooting. He also allegedly wrote about conspiracy theories, saying some groups are trying to replace white people in the U.S. with people of color.

The Buffalo News in a May 14 article said the author of the manifesto, in addition, wrote about buying ammunition, surplus military and other preparations.

“The scourge of senseless gun violence that has taken the lives of so many across our nation and changed the lives of countless innocent men, women and children must come to an end,” Bishop Michael W. Fisher of Buffalo said in a statement posted on Twitter shortly after the attack.

The Erie district attorney’s office said the “defendant drove” more than three hours to a Tops supermarket located in a predominantly Black section of Buffalo, “with the intent to commit a crime.”

It’s a scenario eerily similar to a 2019 mass shooting in El Paso, where the suspected gunman in that incident drove close to 10 hours, also left behind a racist manifesto railing against a “Hispanic invasion of Texas” and opened fire on a mostly Latino clientele at a Walmart in 2019. He also is said to have referenced the same conspiracy theory tied to the suspect in the Buffalo shooting.

In El Paso, priests from the diocese were allowed in shortly after the shooting to comfort and administer last rites to the dying. Bishop Seitz for months visited the wounded and wrote a pastoral letter against hatred and included the church’s role in racism at the border.

“We know this pain all too well! Our prayers are with the people that lost loved ones today, the faithful of the Diocese of Buffalo and the entire city of Buffalo,” the Diocese of El Paso wrote in a post following the Buffalo attack.

Other bishops, too, reached out with messages of solidarity.

Bishop Edward B. Scharfenberger of Albany, New York, said: “News of the shootings in Buffalo brought me great sorrow and moved my heart to reach out to the people I remember so well and have come to love during the year I was present to them. I urge you to join me in prayer.”

He was apostolic administrator of the Diocese of Buffalo from December 2019 to January 2021.

Bishop Robert J. Brennan of Brooklyn, New York, who said he was “horrified” at the attack, asked for prayers for the victims, their families, and an “end to hate, violence and racism in our country and in the world.”

West Virginia’s Bishop Brennan said that while new laws can help, what’s needed most is “a true change of mind and heart that leads us to recognize and affirm the value of every human life, no matter how different the person is from me.”

“It is the kind of change that authentic religion promotes. God has made us all in his image and likeness. He has commanded us to love one another, to bear one another’s burdens,” he said. “Unless we embrace this understanding more fully in America, we can expect more such tragedies — and against Jews, (Muslims) and immigrants as well as against African Americans.”

He also made an appeal to gun owners to support restrictions.

“We must also face the fact that the widespread availability of guns is a crucial factor in racial violence. It is much harder to escape from a bullet than it is from a knife,” the West Virginia prelate wrote. “I recognize that most gun owners have them for the protection of their families and themselves or for hunting.

“I challenge you who own guns for such purposes to propose ways in which the availability of guns could be significantly restricted.”

He added, “I have lived in countries where guns are much less available than in the United States and where, correspondingly, gun deaths are much less common. We have to do better than we are doing. Gun owners: Step up to the challenge!” 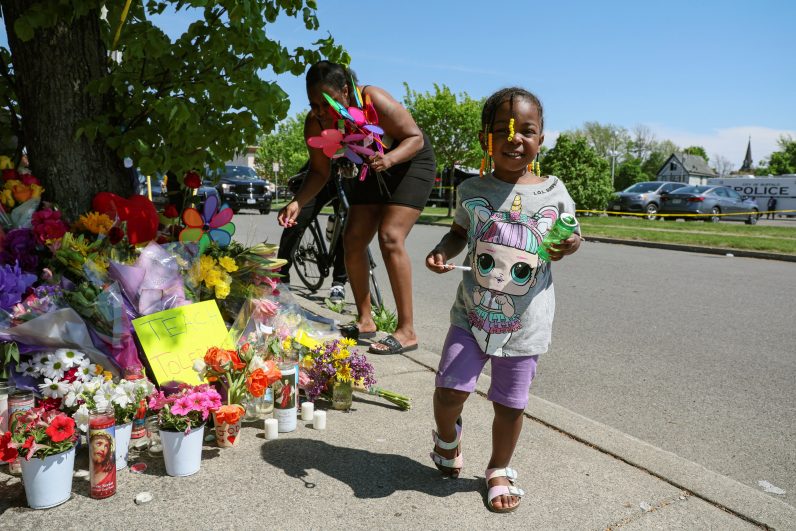 People in Buffalo, N.Y., are seen near a TOPS supermarket memorial May 15, 2022. Authorities say the mass shooting the day before that left 10 people dead was racially motivated. (CNS photo/Brendan McDermid, Reuters)

NEXT: Ukrainians ‘have made the Bible come alive’ for world, says archbishop