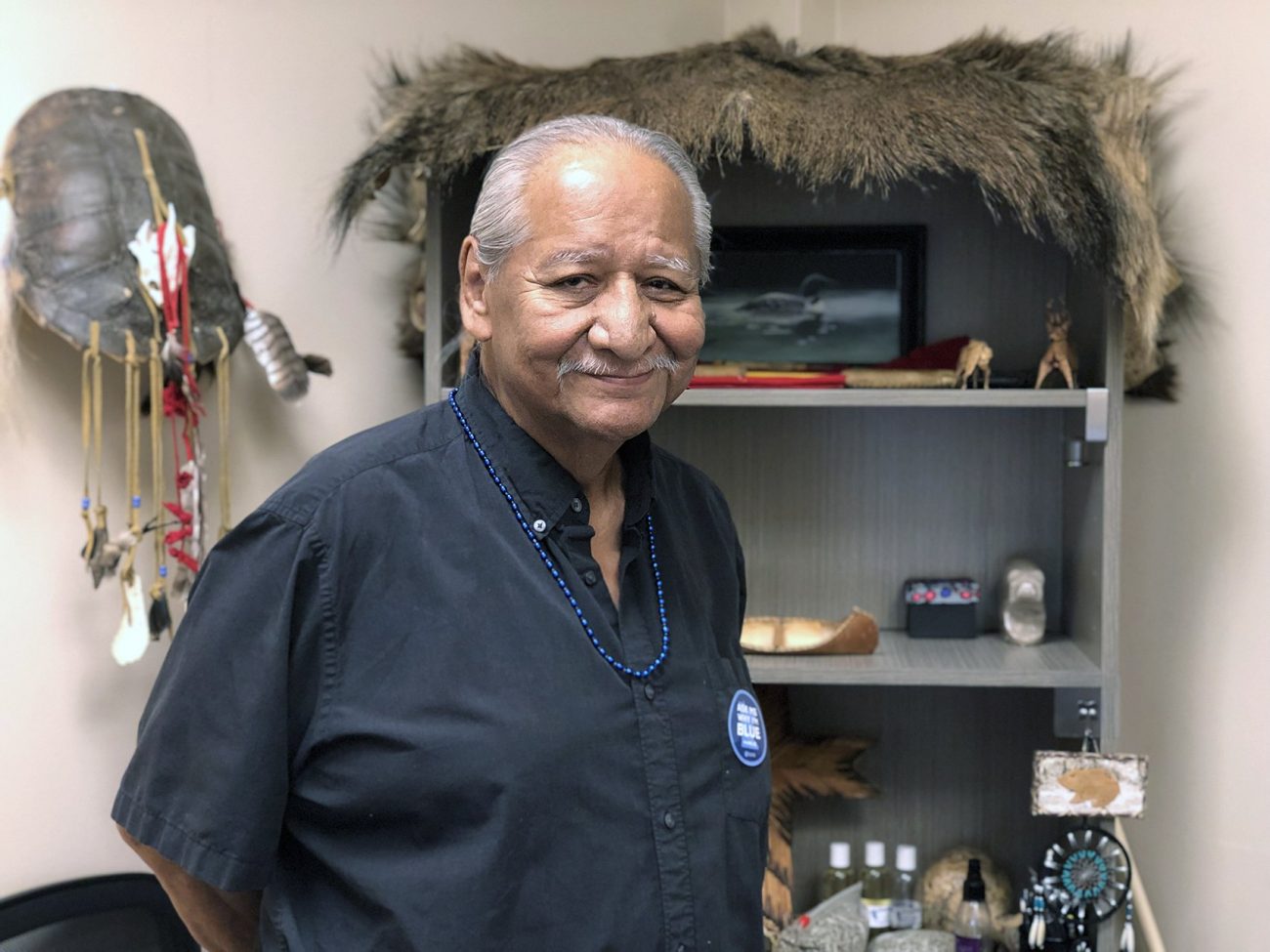 D. Richard Wright, a member of the Leech Lake Band of Ojibwe, is seen in this undated photo. He is an expert in indigenous spiritual health at the Indian Health Board of Minneapolis. A longtime addiction counselor, Wright said he sees the intergenerational effects of the boarding school era in his clients and community. (CNS photo/Maria Wiering, The Catholic Spirit)

MINNEAPOLIS (CNS) — The doll is about 6 inches tall, handcrafted of red leather, with a tan belt and headband around its long black hair. It’s a male warrior, holding a bow.

“This is actually me,” D. Richard Wright said of the doll.

Wright, a parishioner of Gichitwaa Kateri Catholic Church in Minneapolis, made it as part of an effort to process recent findings in Canada of what are believed to be hundreds of graves of children on the sites of former Indigenous residential schools.

Some Twin Cities American Indians — mostly women — gathered to make “spirit dolls” representing the children in some of those graves, resulting in an exhibit called “215+” on display at the end of last year through this January at Indigenous Roots Cultural Arts Center in St. Paul.

Wright, 72, is a member of the Leech Lake Band of Ojibwe. He made the doll, he said, not because he attended an Indian boarding school — he didn’t, but his father and grandparents did — but because he wanted to symbolize what he sees as the need for American Indians “to put down our warrior mentality” and “find a way to deal with what’s going on in a positive way.”

Among Native Americans, seeking information in order to understand the history of the Indian boarding school era is largely accepted as the first step toward healing and justice.

The discovery in May 2021 of about 200 unmarked graves on the campus of long-closed Kamloops Indian Residential School in British Columbia has drawn attention to the history of boarding schools in Canada as well as the United States, where the practice began in the 19th century.

The Kamloops discoveries prompted the U.S. Department of the Interior to launch last June the Federal Indian Boarding School Initiative, described as “a comprehensive review of the troubled legacy of federal boarding school policies.”

The department’s report, submitted to Interior Secretary Deb Haaland and publicly released May 11, highlights abuses many of these children endured at these government-run schools and also identifies burial sites at more than 50 of the former schools.

As the U.S. begins to confront this chapter of its history, so does the Catholic Church.

The National Native American Boarding School Healing Coalition, or NABS, has compiled what is generally regarded as the most comprehensive, if admittedly incomplete, list of U.S. Indian boarding schools. Data show that at least 84 of the 367 identified schools were run by Catholic institutions through U.S. government contracts. A group of Catholic archivists believe there were many more.

Last summer, the Archdiocese of St. Paul and Minneapolis employees began looking into what was already known about its involvement with boarding schools, including one it ran in west-central Minnesota in the late 1800s. Efforts are underway to share archdiocesan records with the tribal nations.

As Archbishop Bernard A. Hebda of St. Paul and Minneapolis and Minnesota’s other bishops work to form and strengthen relationships with tribal leaders, Archbishop Hebda has asked for prayers so that the church “might be able to shed the light that we need on the facts of what happened” and eventually create a “mutual plan between tribal leadership and Catholics in our state to respond in some way.”

Allison Spies, of the archdiocese’s Office of Archives and Records Management, said there were more than 15 schools in Minnesota. She is working to identify those operated by the Catholic Church. Among them was the Catholic Industrial School for Boys at Clontarf in Swift County, about 150 miles west of the Twin Cities, which the archdiocese administered from 1877 to 1892. Beginning in 1884, most of its students were American Indians.

Spies began reviewing records in August, and in November, she joined the U.S. Conference of Catholic Bishops’ Subcommittee on Native American Affairs’ Accountability and Healing Project.

She is now coordinating the Minnesota Catholic Conference’s efforts to identify archival information held by the state’s dioceses and share it with Minnesota’s 11 tribal nations.

That work is the initial outcome of a December meeting among Catholic bishops and leaders and representatives of Minnesota tribes to discuss how the church can assist the tribes’ efforts to gather information about the schools.

Maryanna Harstad is program director at Gichitwaa Kateri, an archdiocesan parish established to minister to American Indian Catholics. She was adopted from the Leech Lake Band of Ojibwe as an infant by a Catholic couple in Minneapolis.

When she was 18, she was able to identify her tribe through the Minnesota Department of Human Services. She connected with her mother, who also told her about her birth father. They met, she learned, at a boarding school. 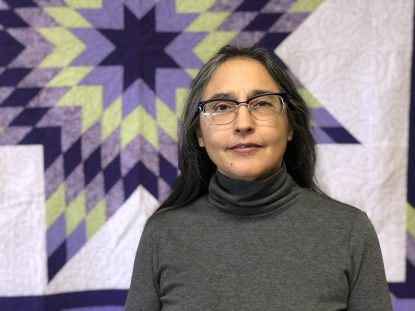 Maryanna Harstad, adopted from the Leech Lake Band of Ojibwe as an infant by a Catholic couple in Minneapolis, is seen in this undated photo. She is the program director at Gichitwaa Kateri in south Minneapolis, home of the Archdiocese of St. Paul and Minneapolis’ Office for Indian Ministry. Harstad’s birth parents attended Indian boarding schools. (CNS photo/Maria Wiering, The Catholic Spirit)

Harstad was born when her mother was 24, the second of her five children, all of whom were removed from her mother’s home because of her struggles with alcohol and depression. Harstad thinks her mother’s life may have been different if she had grown up with her family.

She said she would like non-Native Catholics “to try to see the traumatic legacy of the boarding school era from the perspective of Native people. And I realize that’s a difficult thing. But in any kind of situation, if you try to look at it from the perspective of those who felt the impact, that’s a place with more understanding” than trying to justify those who caused harm.

For U.S. Catholics, revelations of the boarding school era mean grappling with some survivors’ accounts of horrible treatment in the schools, including from priests and religious sisters. There is also the question of Christians’ involvement in the first place.

Red Cloud Indian School, once a boarding school his grandfather and great-grandfathers attended, is now a Lakota language immersion school.

Efforts at the school efforts are focused on confronting the reality of life in boarding schools. It’s the place where the church needs to join American Indians, he said.

“This has been a history that mainstream America has not known about and it has not taught about, it’s not talked about,” Black Elk said. “For Native people, this is not news. It’s not shocking. It’s family history.”

Black Elk, who is Catholic, said that he sees the Catholic Church trying to “make sense of” the boarding school history.

The next step, he said, is to “take the time to understand it, understand its impact, and understand why that history is still relevant today and the legacy of it, and also understand the complexity of it, that it’s not a black-and-white story, but that it takes time to sort of wrestle and chew on all of that.”