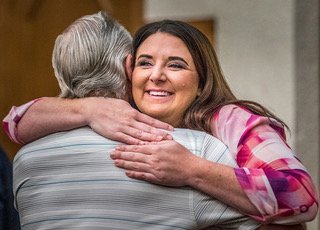 Jennifer Ferguson, daughter of Jeffrey Ferguson, hugs Jim Hall, whose daughter was killed by Jeffrey in 1989. The families found healing and reconciliation the day of Jeffrey Ferguson’s funeral, after he was executed. (CNS photo/Lisa Johnson, St. Louis Review courtesy The Catholic Missourian)

Although still holding out hope for a commutation of his death sentence, he had long accepted that his time was coming, probably sooner than later.

“So every day, he would try to be more prepared than he was the day before,” said Lisa Boyd, who had visited Ferguson in prison and produced a short documentary film that touched on his radical conversion on death row.

Deeply remorseful for what he had done, he spent nearly a quarter-century ministering to and mentoring his fellow residents, along with visitors and staff of the Potosi Correctional Center near Mineral Point.

“It’s been my mission through my friendship with Jeff and ultimately with Kelli’s father, Jim Hall, to understand the importance of being ready not just for whatever will happen today — but being ready to be the best person you can be in the present moment,” she said.

Her latest cinematic offering, a feature-length documentary that premiered Good Friday over online streaming services, focuses on the providential chain of events that led up to the fulfillment of Ferguson’s dying wish — that his victim’s family would forgive him.

“It’s about the healing power of transformation and forgiveness,” Boyd said of the production, “An American Tragedy.”

“I’ve been a Christian my whole life,” she noted. “But to witness such a transformation on all sides and see God’s work happening right in front of my eyes was simply amazing.”

Boyd, an independent filmmaker, and her husband — director, producer and cinematographer David Boyd — are based in Los Angeles, but Lisa grew up in southern Missouri.

She met Ferguson in 2012 while visiting the Potosi prison with her uncle and his Christian biker gang, the Sons of Thunder, to interview men on death row.

Ferguson was scheduled to be executed the following day, but this was delayed.

The interviews she did at the prison became part of her first short documentary film, the award-winning “Potosi: God in Death Row.” 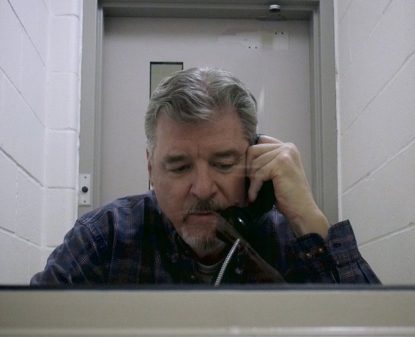 This is a screen shot from the film “An American Tragedy.” (CNS photo/courtesy The Catholic Missourian)

Ferguson invited the couple back for another visit shortly before his execution date two years later.

“Jeffrey shared so much about his experience, his life, the crime, his daughters, the family, and how deeply sad he was that he had committed the crime,” Boyd recalled.

He spoke of his efforts to practice his faith and become the best man he could be in prison, in order to offset some of the harm he had caused.

“He shared with me how he helped his ‘cellies’ begin to forgive themselves for the crimes they had committed,” said Boyd.

“That was his mission in the prison,” Boyd noted. “To bring restoration and hope.”

Ferguson also revealed his desire that Kelli Hall’s family could find the grace to forgive him before he died.

Boyd contacted every source she could think of who might be able to help Ferguson get in touch with the Hall family to no avail.

In the meantime, Ferguson asked if she would consider attending his execution.

When she said it would be more than she could handle, he asked if she would attend his funeral.

That she could do.

Ferguson’s was to be Missouri’s fifth execution in five months.

As with all executions that came before, the Missouri Catholic Conference joined in filing a petition, asking the governor to commute Ferguson’s sentence to life in prison without possibility of parole. The request was denied.

The conference later commented on Ferguson’s execution noting how he had made reforms while in prison, helping to set up a hospice program for dying inmates and helping inmates with the prison ministry program.

Boyd flew into St. Louis the night before Ferguson’s funeral and received an email from Steven Hall, Kelli’s brother, who had found a reference to Boyd’s film while searching his sister’s name on the internet.

She met him the next morning and also visited with Kelli’s parents, Sue and Jim Hall and told them Ferguson’s wish that their family would forgive him.

Later that day, she returned to the home of Jim Hall, who had watched the copy of “Potosi” she had brought for his family.

“He broke down and said he wished he had seen this before the execution,” said Boyd, “because he now saw Jeffrey Ferguson as a human being, not as the monster who killed his daughter 26 years before — and that he would have fought to save Jeffrey’s life.”

“I saw the world lift from his shoulders,” she said. “Seeing Jim go from having so much anger to literally, physically lighting up right in front of me — it just validated my faith in God, 2,000-fold.”

Boyd had promised Ferguson to share his story in any way she could.

The first part of that was the production of “An American Tragedy,” with its growing circle of participants.

Jim Hall had kept a collection of news clippings and TV segments he had recorded on VHS tapes throughout Ferguson’s trial which provided invaluable information for the new documentary.

Jim Hall died before the film’s release. Boyd is convinced that he, his daughter and the man who took her life, having hopefully been reconciled to God and each other in heaven, approve of the finished product.

“She’s a very courageous woman to go through everything she went through as a child, as a teenager, as an adult and as a mom,” said Boyd, “and then to be interviewed for the film and say what she said — she’s a very dynamic and powerful woman.”

“An American Tragedy” recently landed top honors at the St. Louis International Film Festival and at other festivals. Boyd hopes the accolades will help spread the story.

“All of this has cemented my belief,” she said. “And I’m truly humbled. How can you not believe in God, when miracles are being revealed right in front of you?”

Boyd’s next step is to produce a full-length feature film about the story for national distribution.

“There’s a lot of power in this story,” she said: “Redemption, forgiveness and resurrection.”

Nies is editor of the Catholic Missourian, newspaper of the Diocese of Jefferson City.

NEXT: Kentucky diocese to restore Communion under both species