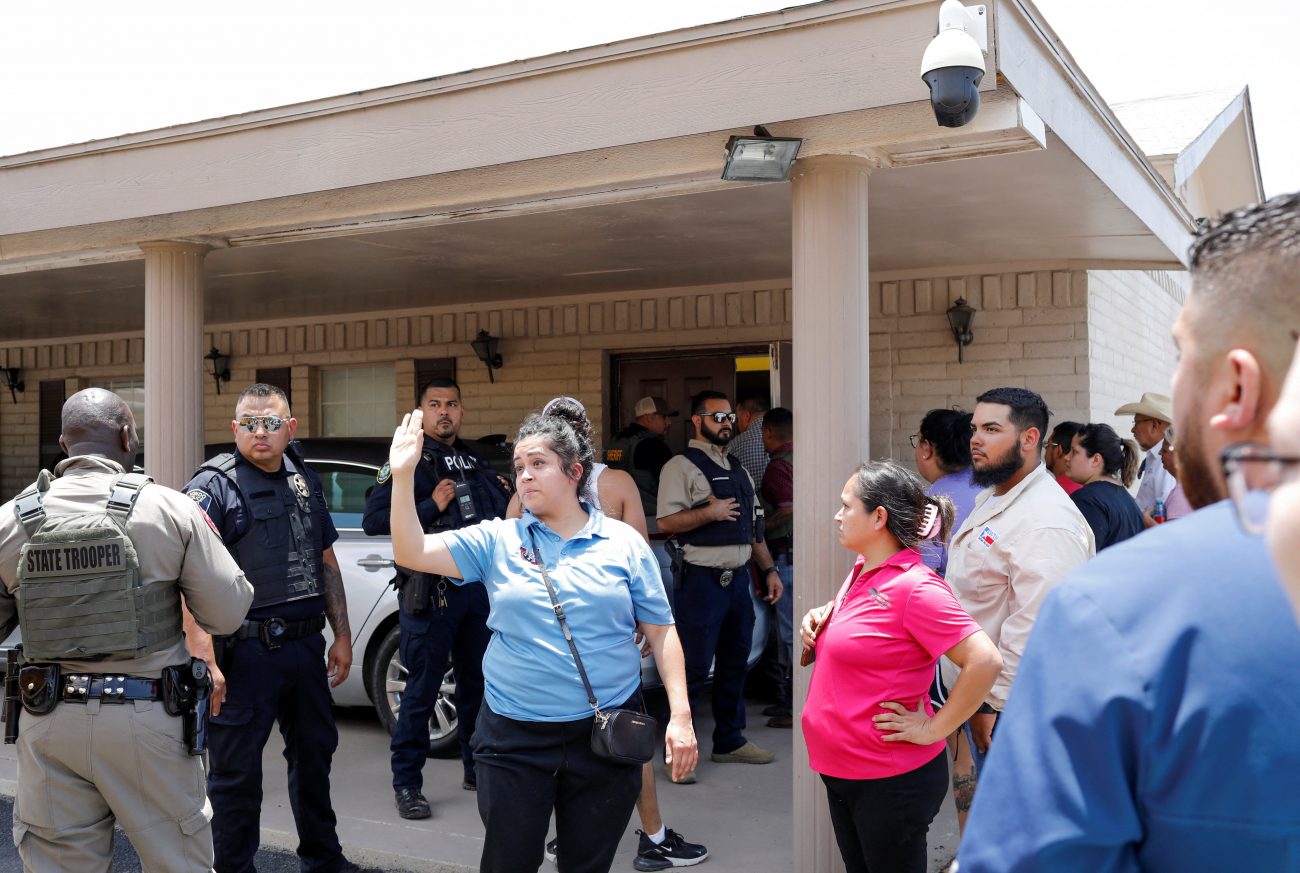 WASHINGTON (CNS) — Several U.S. bishops spoke out against the easy accessibility to guns in the country following a May 24 rampage that left at least 19 children and two of their elementary school teachers dead in Uvalde, Texas.

“Don’t tell me that guns aren’t the problem, people are. I’m sick of hearing it,” Bishop Daniel E. Flores of Brownsville, Texas, tweeted May 25. “The darkness first takes our children who then kill our children, using the guns that are easier to obtain than aspirin. We sacralize death’s instruments and then are surprised that death uses them.”

The comments came hours after Texas authorities said an 18-year-old with two assault weapons evaded police after crashing his truck near an elementary school close to the U.S.-Mexico border and entered the school building at around noon armed with what seemed to be a rifle.

“There was several law enforcement that engaged the suspect but he was able to make entry into the school where he did go into several classrooms and, unfortunately, he did fire his firearm,” Sgt. Erick Estrada, of the Texas Department of Public Safety, told CNN late May 24.

A Border Patrol unit subsequently arrived and one of its officers shot and killed the shooter in the classroom full of fourth graders.

In addition to the dead, reports say 15 children were injured as well as the two law enforcement officers who initially attempted to stop him. Authorities named Salvador Ramos as the shooter and said that prior to arriving at the school, he shot his grandmother, who remains in the hospital.

San Antonio Archbishop Gustavo García-Siller comforted families outside a local civic center in Uvalde as they waited for news. Along with priests from the Archdiocese of San Antonio, he spent much of the day tending to parishioners and others who needed comfort after the horrific day.

“When will these insane acts of violence end?” the archbishop later said in a statement. “It is too great a burden to bear. The word tragedy doesn’t begin to describe what occurred. These massacres cannot be considered ‘the new normal.'”

“The Catholic Church consistently calls for the protection of all life; and these mass shootings are a most pressing life issue on which all in society must act — elected leaders and citizens alike,” he said. “We pray that God comfort and offer compassion to the families of these little ones whose pain is unbearable.”

He confirmed to a CNN reporter that there’s an effort to connect with Ramos’ family and said he would show them gestures of “tenderness, compassion because they are suffering, too.” He said Ramos’ actions were evil but said he didn’t agree when he heard someone say “that man is evil.”

“No, they were evil actions. Everyone has dignity and the family is suffering, too,” he said. “It’s easy to make remarks that destroy people’s lives … there’s already enough destruction.”

Chieko Noguchi, director of public affairs for the U.S. Conference of Catholic bishops, said the organization joined Archbishop García-Siller in prayers for the community.

“There have been too many school shootings, too much killing of the innocent. Our Catholic faith calls us to pray for those who have died and to bind the wounds of others,” she said in a statement. “As we do so, each of us also needs to search our souls for ways that we can do more to understand this epidemic of evil and violence and implore our elected officials to help us take action.”

In a statement, the Diocese of El Paso, Texas, suggested that a course of action from the Catholic Church could come “in findings ways to more effectively identify people at risk of such behavior and to push for reasonable limits to the proliferation of firearms.”

From Rome, Pope Francis also weighed in, saying: “It’s time to say ‘Enough’ to the indiscriminate trade of weapons!” and encouraged all to be committed in the effort “so that tragedies like this cannot occur again.”

In Philadelphia, Archbishop Nelson J. Pérez said in a statement May 25 that all Americans “share a responsibility to uphold God’s most precious gift, that of human life.”

“Holistic actions must be undertaken to address the broad spectrum of causes for these acts of mass murder,” he said. “May God embolden us and may he give wisdom to our leaders as we work together to stamp out this evil for good.”

Chicago Cardinal Blase J. Cupich in a May 24 tweet said the right to life trumps the right to have weapons and that “the Second Amendment did not come down from Sinai.”

“The right to bear arms will never be more important than human life,” he said. “Our children have rights too. And our elected officials have a moral duty to protect them.”

In an address to the nation, President Joe Biden recalled his time as vice president when he could not get enough members of Congress to agree on gun control legislation in 2013, a year after 26 people, including 20 elementary school children, were fatally shot by a gunman at Sandy Hook Elementary School in Newtown, Connecticut.

Cardinal Cupich, in his tweets, implored people, not just to lament, but to act.

“We must weep and soak in the grief that comes with the knowledge that these children of God were cut down by a man who was just a few years their senior. But then we must steel ourselves to act in the face of what seems like insurmountable despair,” he tweeted. “As I reflect on this latest American massacre, I keep returning to the questions: Who are we as a nation if we do not act to protect our children? What do we love more: our instruments of death or our future?”

The USCCB has consistently called for gun control.

In a presentation titled “Responses to the Plague of Gun Violence” he delivered Nov. 11, 2019, during the U.S. bishops’ fall general assembly, Bishop Frank J. Dewane of Venice, Florida, then chairman of the Committee on Domestic Justice and Human Development, spelled out the bishops’ support for a ban on assault weapons, universal background checks, a federal gun trafficking bill, regulations on sales of handguns, improved mental health interventions, safety measures and “an honest assessment of violent images and experiences in our society.”

Like much of the American public voicing frustrations after the mass shooting in Texas, Bishop Mark E. Brennan of Wheeling-Charleston, West Virginia, said the country “must now do more than offer prayers and support.”

He called on all, but particularly on lawmakers and gun owners “to work together and take action to ensure the safety of our children, our schools, our churches and our communities.”