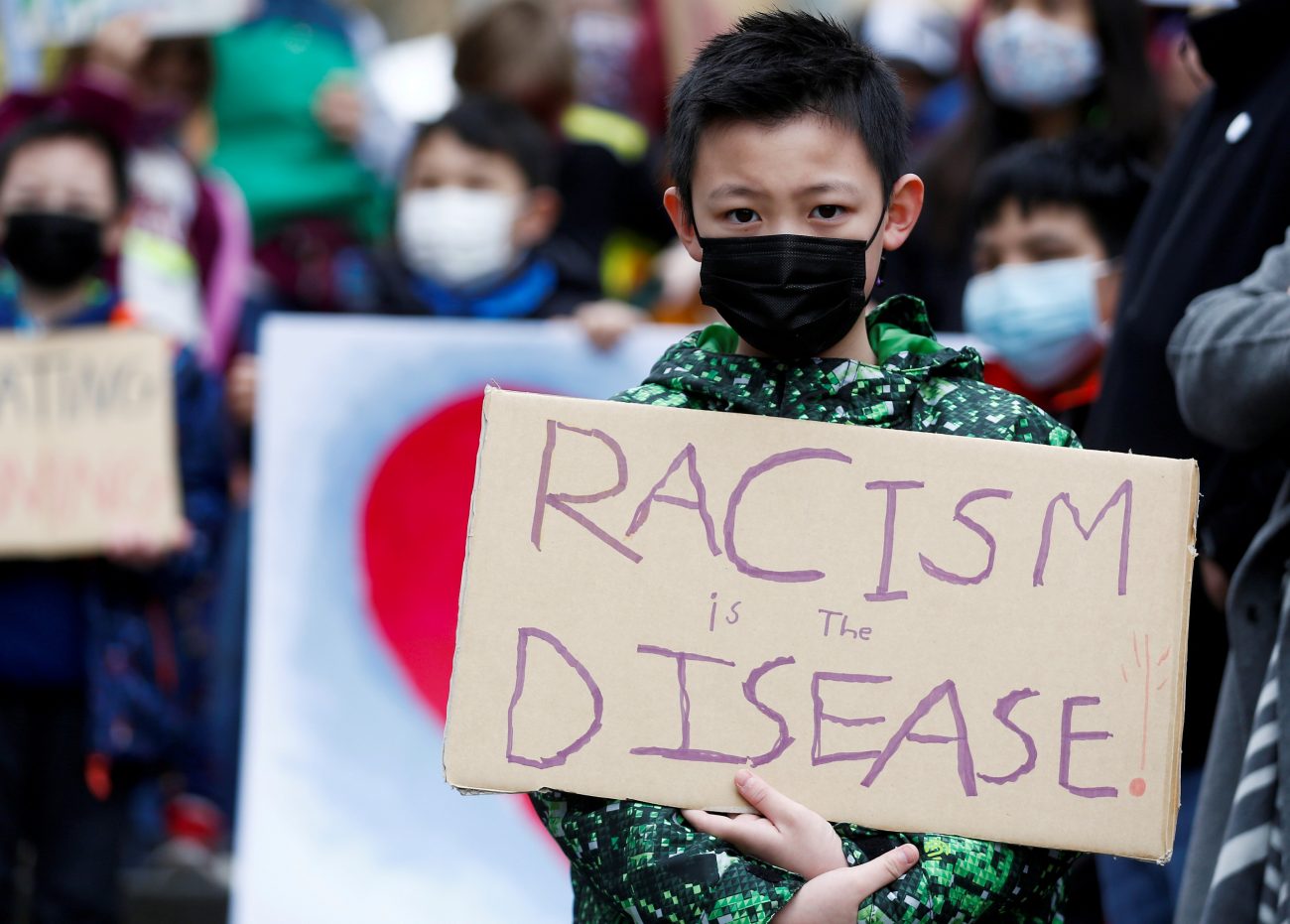 A boy in the Chinatown-International District of Seattle holds a sign reading, "Racism is the disease," during a "Kids vs. Racism" rally March 20, 2021. (CNS photo/Lindsey Wasson, Reuters)

WASHINGTON (CNS) — From a Franciscan parish in a city where one of the victims once lived to a border city that experienced a similar mass shooting, Catholics around the nation have gathered to remember those gunned down May 14 in Buffalo, New York, and are praying for an end to violence and racism.

In Syracuse, New York, family and friends gathered at Assumption Church May 21 to mourn Roberta Drury, who at 32, was the youngest victim of what authorities believe was a racially motivated attack targeting Black people at a Buffalo grocery store.

“Last Saturday, May the 14th, our corner of the world was changed forever. Lives ended. Dreams shattered and our state was plunged into mourning,” Franciscan Father Nicholas Spano said during Drury’s funeral Mass attended by her parents.

Authorities said that a gunman wearing tactical gear and armed with an assault weapon entered a supermarket in a predominantly Black area of Buffalo at around 2:30 p.m. that day and began firing at customers and employees, injuring three and killing 10.

One of them was Drury, who was raised in the Syracuse area but moved away a decade ago to care for a sick brother in Buffalo, news reports said.

Police arrested 18-year-old suspect Payton S. Gendron, of Conklin, New York, at the scene. He pleaded “not guilty” after being charged with first-degree murder and is in custody without bail.

News reports said authorities have pointed to a 180-page online document the shooting suspect is alleged to have left behind, filled with racist views and details of his plan of attack. The Associated Press reported that the writer “intended to terrorize all nonwhite, non-Christian people and get them to leave the country.”

“There are no words to fully express the depth and breadth of this tragedy,” Father Spano, parochial vicar at Assumption Church, said to those at Drury’s funeral Mass.

“I think white people really do need to get angry — and not just when something like this happens. This ought to wake us up,” Father Jim Curran, pastor of the Basilica of St. Mary’s in Norfolk, Virginia, told local television station WTKR, after a May 23 event in which parishioners gathered outside to pray for Buffalo’s victims.

In El Paso, Texas, where a similar tragedy took place after a gunman opened fire on a mostly Latino clientele at a Walmart in 2019, community members, including Bishop Mark J. Seitz, gathered at a park in a show of solidarity with Buffalo May 22. Flyers announcing the event said that the similarities of the violent attack in both cities “will always unite our two communities.”

“We entrust the souls of the just to you, O Lord. We entrust to you souls singled out by the color of their skin, slain by weapons of war and instruments of hatred. We entrust to you our Latino and African American brothers and sisters, and all other people of every race and nation, victims of the diabolical lunacy of racial discrimination.”

Bishop Seitz, along with priests from the El Paso Diocese, tended to the dying as well as the injured following the 2019 attack, which left 23 dead and 23 injured.

“As you care for those who have died and were injured in El Paso and in Buffalo, and all those sacrificed at the altar of the gods of White Supremacy, we ask your forgiveness, O Lord, for all the ways we fail to recognize this evil and its long shadow,” Bishop Seitz prayed.

The prelate asked for forgiveness for the country’s “failure to respect the human dignity of our brothers and sisters of color.”

“Tonight, we ask you, Lord, to be with the African American community and with all the people of Buffalo who will long feel this pain,” Bishop Seitz continued. “Grant them the consolation that only you can give in the assurance of a life for their beloved beyond this broken world, knowing they are your beloved as well, Lord of Life.”

“The souls of the just are in your hands, O Lord, but there is one final grace that we beg of you,” he said. “Out of the ashes of these unspeakable crimes, grant that we might rededicate ourselves, people of every race, to making of ourselves one family, diverse in our origins, varied in our cultures and languages and gifts, yet beloved daughters and sons of the same loving God, who is Lord forever and ever.” 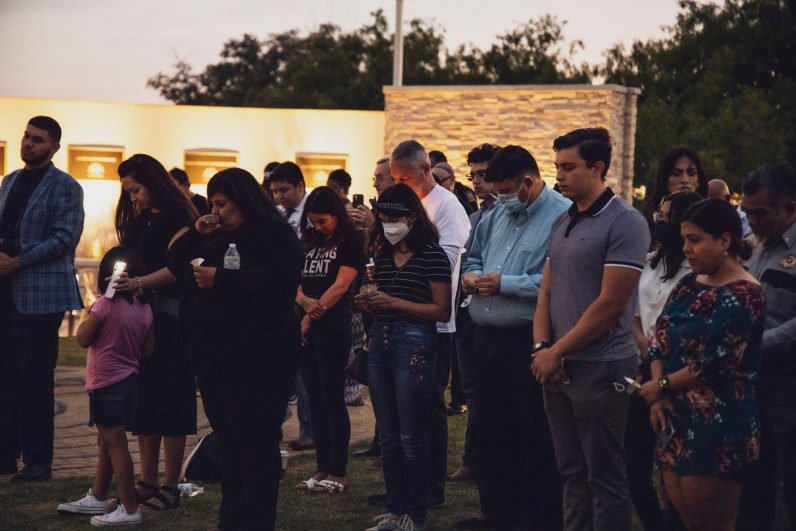 People gather for a May 22, 2022, vigil in El Paso, Texas, honoring the memory of victims of a May 14 mass shooting that targeted a Black community in Buffalo, N.Y. Organizers of the vigil in El Paso, which experienced a mass shooting targeting Latinos in 2019, said the similarity of the violent attacks targeting people of color “will always unite our two communities.” (CNS photo/courtesy Diocese of El Paso)