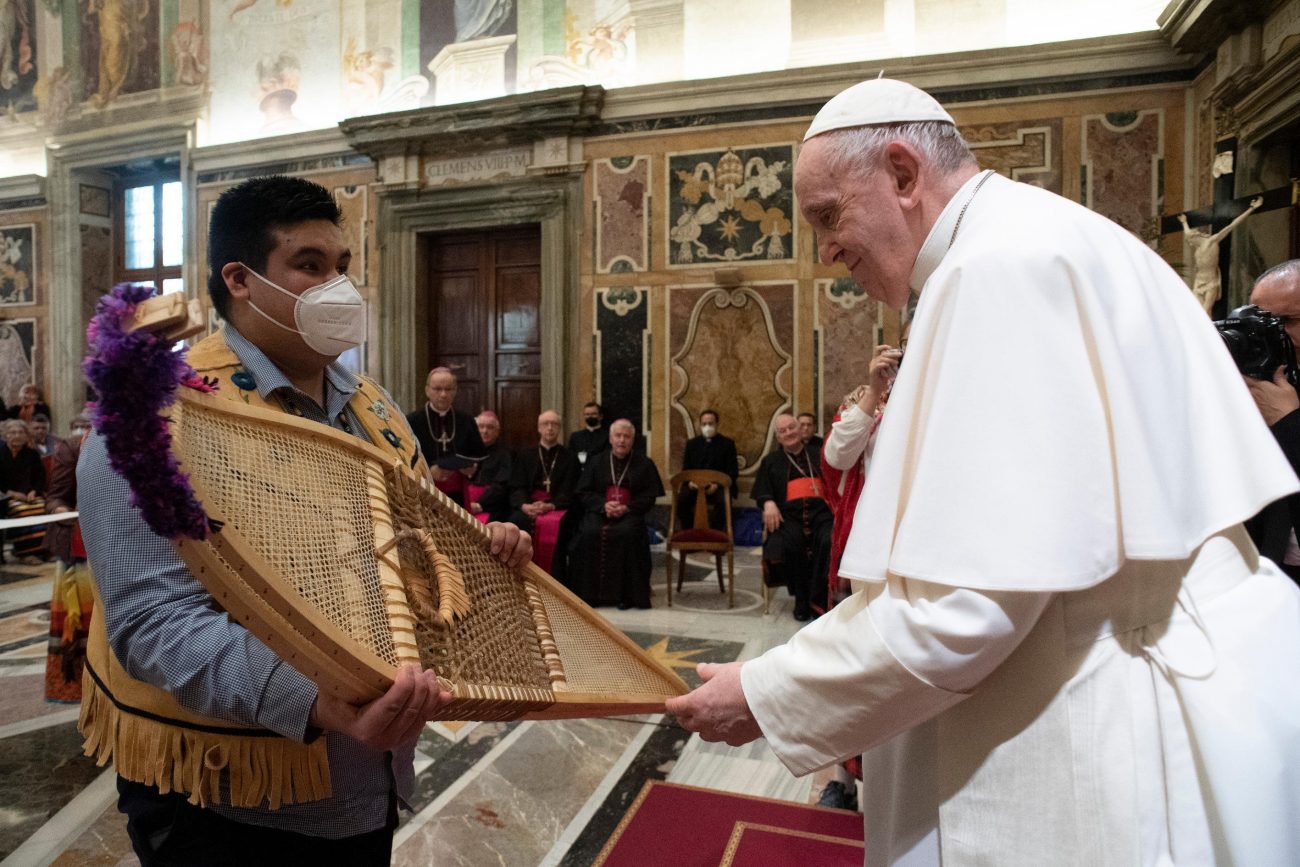 Adrian Gunner, representing the Assembly of First Nations, presents Pope Francis with snowshoes made of black ash with caribou sinew and artificial sinew in the Vatican's Clementine Hall April 1, 2022. The pope will meet members of Canada's Indigenous communities in late July, visiting the cities of Edmonton, Alberta; Quebec; and Iqaluit, Nunavut, the country's most northern region. (CNS photo/Vatican Media)

TORONTO (CNS) — For six days in July, the most important thing happening in Canada will be an old man confronting the nation’s history.

Pope Francis will be in Canada July 24-29 on a pilgrimage of healing and reconciliation, visiting Edmonton, Alberta; Iqaluit, Nunavut; and Quebec City. That the 85-year-old pope will be limited by his age and his health is hardly a surprise, but it is also an advantage — an aspect of Pope Francis’ spiritual power to heal.

For Indigenous Canadians, out of the many different parts of Pope Francis’ identity, none matters more than his status as an elder.

“In our minds and in our world view, as you age you become more valuable to the community,” explained Deacon Harry Lafond, Indigenous education scholar at St. Thomas More College in Saskatoon, Saskatchewan, and former chief of the Muskeg Lake Cree First Nation. “Simply because your age tends to help you to understand life from a different perspective. You bring that to the generations that are following you. And people depend on that. They depend on these elders to provide that spiritual leadership, that road to wisdom about life and living.”

Edmonton Archbishop Richard Smith, chosen to coordinate the papal visit on behalf of the Canadian Conference of Catholic Bishops, made it very clear that Pope Francis’ pilgrimage to Canada will be the completion of something begun in Rome March 28-April 1, when he issued a historic apology for acts of trauma and abuse of Indigenous children in Canadian boarding schools over generations. The schools were funded by the government and largely run by Christian churches.

“He met with them (Indigenous Canadians) in Rome so that he could listen to them, listen to their stories, encounter them — hear their hearts and express his own,” Smith told a news conference May 13. “It gave him an opportunity to learn about the historical realities and the historical and ongoing trauma that does continue to impact Indigenous peoples.”

The limitations imposed by Pope Francis’ age are not limitations in the spiritual or historical scope of the papal visit, said Archbishop Smith.

“Because the pope can’t get to every site doesn’t mean he still can’t address every issue,” the archbishop said.

“However, I think the significance of the trip is also for all of Canada — to remind Canadians, the government and all the different faiths who were involved in residential schools that it was wrong,” Nicholas said.

If Canadians really are “Walking Together,” as the official theme of the papal visit proclaims, then non-Indigenous Canadians have to be along for more than just the ride, “at least for those who are Christians, who believe in reconciliation as a sacrament and as a path toward healing and forgiveness,” he said.

Rather than waiting for Indigenous people to show the way to reconciliation, the rest of the country must step up, said Nicholas, a longtime member of the Guadalupe Circle, which brings together Indigenous elders and Catholic bishops.

“Personally, I believe it’s a walk together,” he said. “Indigenous people are not the ones who did the wrong.”

Canada’s Inuit Tapiriit Kanatami greeted news of the pope’s visit in the spirit of a continuing journey.

“Inuit carried a message from the ITK Board of Directors to the Vatican in April, inviting @Pontifex to visit Inuit Nunangat this year,” the official ITK Twitter account said. “We are pleased to be able to welcome Pope Francis in Iqaluit in July for a visit centred on truth, justice, healing, reconciliation and hope.”

For the Métis, despite consternation that national Indigenous organizations were not directly consulted on the three hub locations for the papal visit, the focus remains on the future.

“Our priority remains ensuring that survivors receive whatever is needed most to keep moving forward in their healing journeys, including a formal apology directly from the pope,” Cassidy Caron, Métis National Council president, said in a statement. “We hope that the Vatican will work closely with us in the spirit of reconciliation to ensure there is adequate resourcing for any and all survivors who wish to attend.”

Audrey Poitras, president of the Métis Nation of Alberta, reiterated that the Métis want to see Pope Francis at Lac Ste. Anne.

“The location is culturally and spiritually significant for the Métis Nation of Alberta and all Indigenous peoples in the country,” she said.

“The role of the kokum (grandmother) is very important in Indigenous communities,” Archbishop Smith said. “I would say that Ste. Anne, a visit to Lac Ste. Anne, is probably a strong possibility.”

St. Anne is the grandmother of Jesus.

“I’m really happy. I really have a sense of hope for the future,” Lafond said. But once Pope Francis has played his role as an elder, there has to be more, Lafond added.

Nicholas wants the church in Canada to finally pick up the truth he heard from St. Pope John Paul II in Canada in 1984 and again in 1987.

“Whoever was responsible to bring that dimension of evangelization fell asleep at the switch.”

Nicholas hopes and believes Pope Francis can wake up Canadians.

Swan is associated editor of The Catholic Register.

NEXT: World Meeting of Families opens June 22 in Rome and online