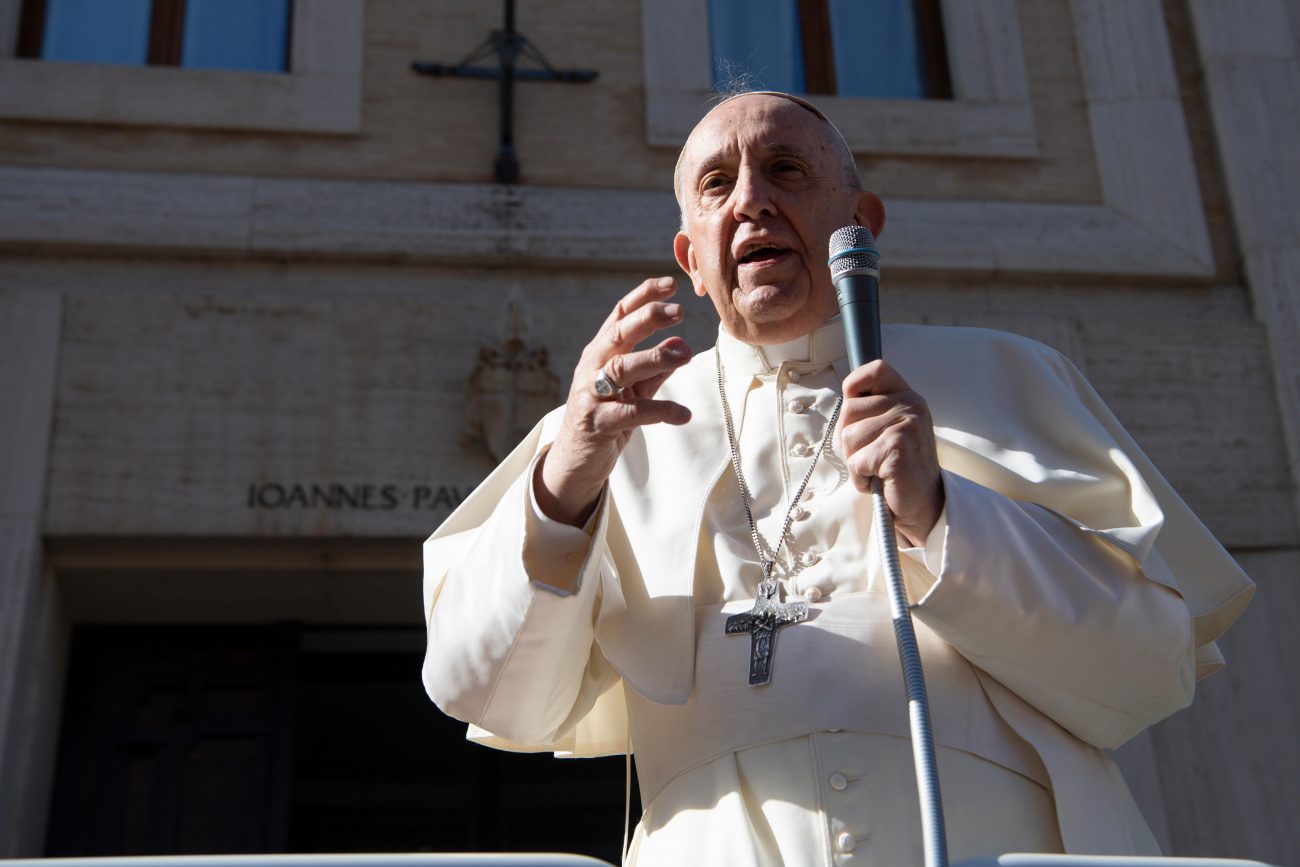 Pope Francis speaks during a meeting with a group of young people preparing for the sacrament of confirmation, outside his residence at the Vatican May 21, 2022. The group was from the Italian city of Genoa. (CNS photo/Vatican Media)

VATICAN CITY (CNS) — Catholics of all ages are called to form strong faith communities, listen to and dialogue with others, reach out to share the Gospel and work to protect the environment, Pope Francis said in a series of speeches May 21.

Still using a wheelchair because of ongoing pain in his knee, Pope Francis had a busy day, meeting four separate groups in addition to holding three private meetings.

The pope’s public appointments began with an apology to several hundred adolescents preparing for confirmation in the Archdiocese of Genoa; they had gathered in the small square between the pope’s residence and St. Peter’s Basilica.

“I’ve made you wait 35 minutes. I am sorry,” the pope told them. “I heard the noise but had not finished the things I had to do first.”

Pope Francis pleaded with the youngsters not to make their confirmation a “farewell sacrament” from active parish life, but to treasure the grace they receive, strengthen it with prayer and share it “because in the church we are not ‘me alone,’ or just me and God; no, we are all of us, in community.”

Welcoming members of the general chapter of the De La Salle Christian Brothers and their new superior general, Brother Armin Altamirano Luistro from the Philippines, Pope Francis told them their schools are Christian “not because of an external label” but because they “educate in responsibility, creativity, coexistence, justice and peace,” helping students cultivate “the sense of wonder and contemplation before the mystery of life and creation” and doing all of it in the name of Jesus.

Pope Francis also helped the Pauline priests and brothers celebrate the 90th anniversary of their Italian magazine, Famiglia Cristiana, one of the top-selling weekly magazines in Italy.

Blessed James Alberione, founder of the Paulines, “imagined a magazine that would bring to families a Christian vision of reality, current affairs, the great themes of the world and the church,” the pope said. He also thought having a Catholic publication arrive every week was like having “God visit the home.”

A Catholic magazine also should help readers set out on paths indicated by the church, and today two of those are “the road of fraternity and the road of integral ecology,” he said. “We must travel these roads, but the method remains the same: dialogue and listening, which enable relationships to be cultivated.”

The “dynamic bond” between God, human beings and other creatures “is an alliance that cannot be broken without irreparable damage,” the pope said. “We do not need titanic heroism, but a meek and patient brotherhood among ourselves and with creation.”

PREVIOUS: Pope calls for united efforts in care for creation