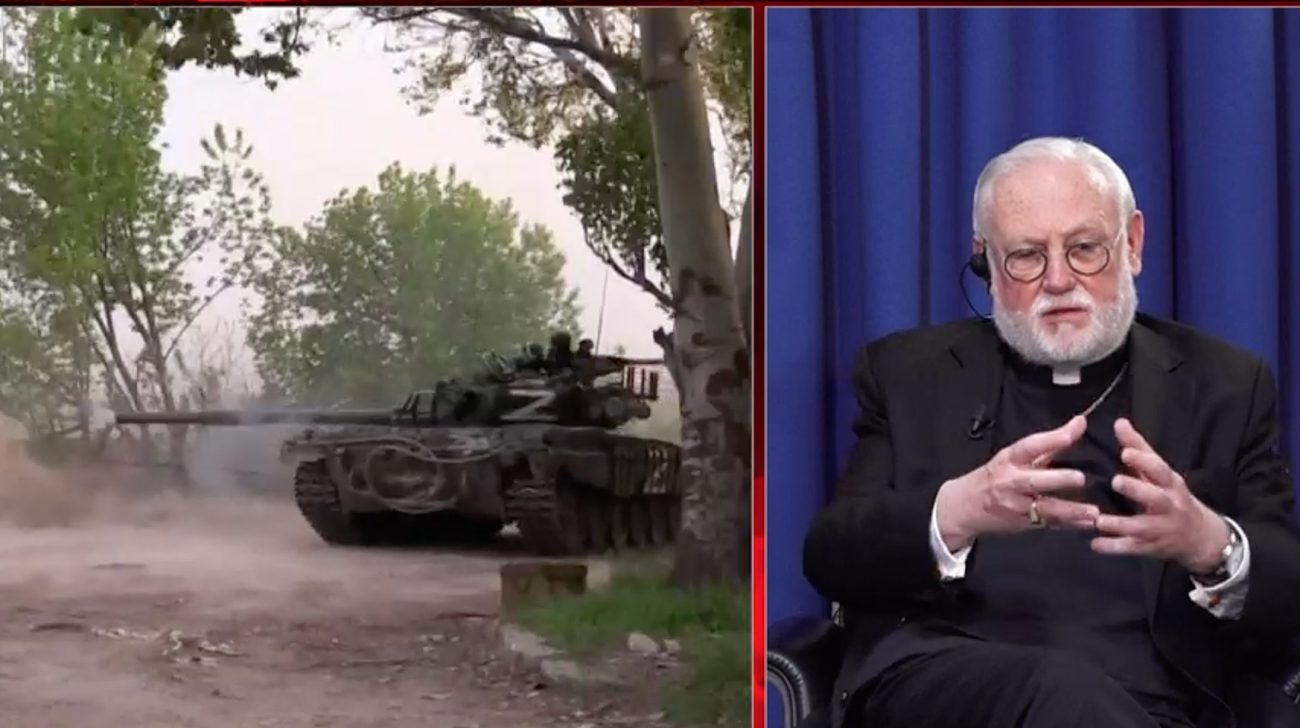 Archbishop Paul R. Gallagher, the Vatican foreign minister, speaks during a May 12, 2022, interview about his scheduled trip to Kyiv, Ukraine, May 18. He said Ukraine has a right to defend itself, but the Vatican and Pope Francis are worried about a new arms race. (CNS photo/Vatican Media)

ROME (CNS) — In the face of Russia’s invasion of Ukraine and the ongoing war, Pope Francis is being very careful to ensure that he offers solidarity and hope to suffering Ukrainians while not doing or saying anything to endanger a possibility for dialogue, said Archbishop Paul R. Gallagher, the Vatican foreign minister.

The archbishop, who will travel to Kyiv, Ukraine, May 18, a trip rescheduled after he tested positive for COVID-19, was interviewed May 12 on an Italian television news program.

Asked about Pope Francis not condemning Russia and Russian President Vladimir Putin by name, the archbishop responded: “The Holy Father is very sensitive about anything that could endanger the principal objectives, which are dialogue and peace.”

When the pope wondered aloud in an interview if Putin launched the invasion because he felt “NATO’s barking at Russia’s door,” he was not questioning the value of NATO or any other alliance for peace and security, “but it must be something proportionate,” Archbishop Gallagher said.

Furthermore, he said, “the pope is very anxious, very concerned that we do not enter into a new arms race,” even though Ukraine has a right to self-defense, including with the assistance of other countries.

“We have before us a war that is more dangerous than ever” because of Russia’s nuclear arsenal, the archbishop added.

Russia’s war on Ukraine and other conflicts around the world, he said, make it clear that the United Nations and other multilateral organizations must be strengthened to favor peaceful resolution of conflicts they were founded to promote.

“I think the large powers like the United States and China, members of the (U.N.) Security Council, have a very important role at this time, and we must appeal to them to fulfill their responsibilities with a deep sense of morality and of urgency,” Archbishop Gallagher said.

The archbishop said it is “undeniable that there is a religious dimension” to the conflict in Ukraine with “the tensions that already existed between (Orthodox) Ecumenical Patriarch Bartholomew (of Constantinople) and Patriarch Kirill of Moscow” over the recognition of an independent Orthodox Church in Ukraine.

“In the context of war,” the tensions have become “even stronger,” he said.

And, the fact that the Russian Orthodox Church, like several other Orthodox churches, is strongly identified with the nation makes it difficult for the church to criticize the government, the archbishop said.

But Pope Francis, he said, has emphasized several times his conviction that church leaders must be “authentic pastors of the people of God and promote peace.”

Still, the archbishop said, ecumenical relations with the Orthodox, both in Constantinople and Moscow, are among Pope Francis’ “priorities,” but he decided to postpone plans to meet with Patriarch Kirill in June “because conditions are not right.”

The pope, he said, does not want to do anything to “worsen the situation” of the suffering people of Ukraine.

In its diplomatic efforts, he said, the Vatican sees its “vocation” as “trying never to take absolute sides but to create the space for dialogue and be available to everyone to favor peace and understanding and to seek a solution to these terrible conflicts, whose results we see every day.”

PREVIOUS: Bishop to step down as abuse spokesman for German bishops’ conference

NEXT: Saints’ lives prove God’s love for all, pope says at canonization Mass