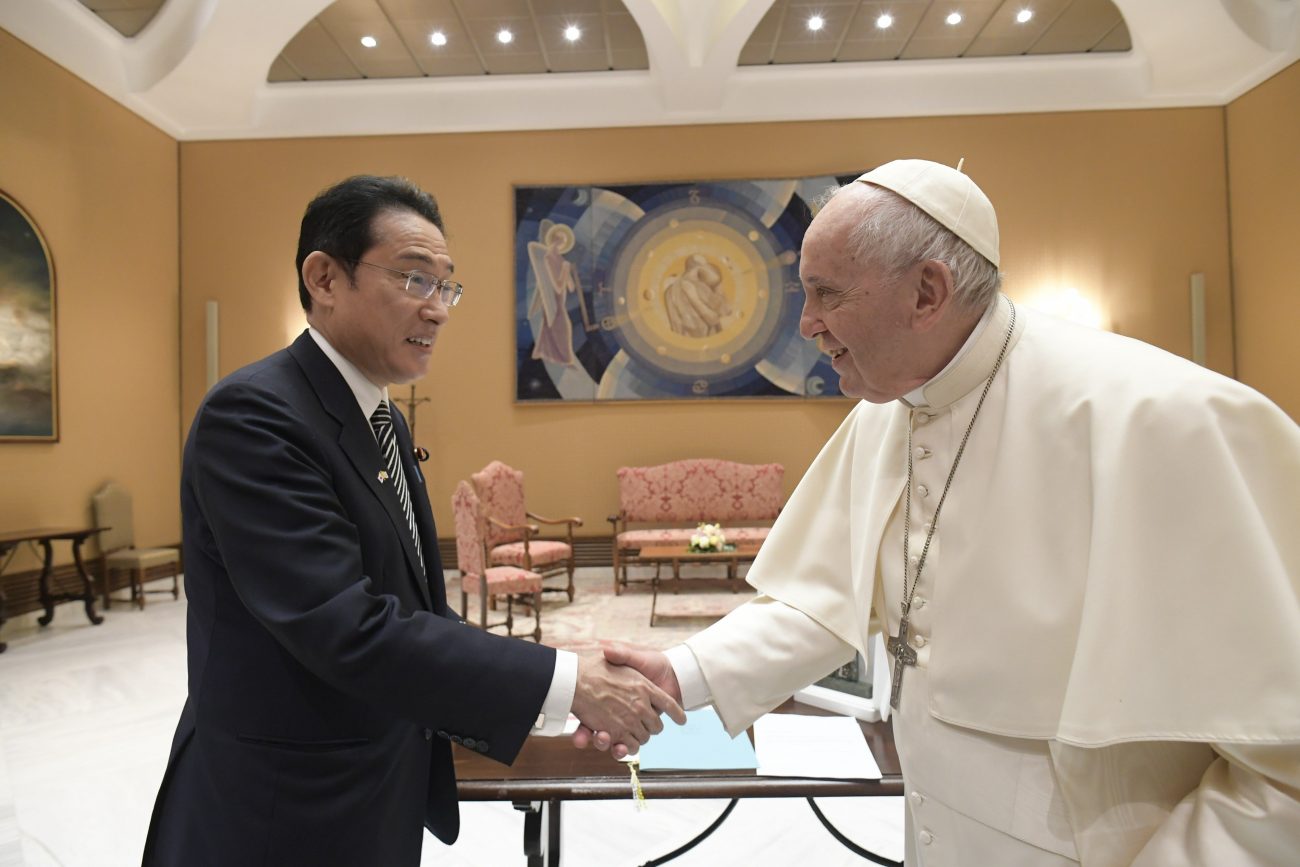 Pope Francis shakes hands with Japanese Prime Minister Fumio Kishida during a private audience at the Vatican May 4, 2022. The Vatican press office said the two leaders discussed the "war in Ukraine, stressing the urgency of dialogue and peace and expressing the hope, to this end, for a world free of nuclear weapons." (CNS photo/Vatican Media)

VATICAN CITY (CNS) — Pope Francis expressed his opposition to nuclear weapons and the threat they pose to the world during a meeting with Japanese Prime Minister Fumio Kishida, the Vatican said.

Vatican spokesman Matteo Bruni told journalists that during the pope’s 25-minute meeting with Kishida May 4, “nuclear weapons were discussed and how their use and possession is inconceivable.”

In a statement released after the meeting, the Vatican press office said the two leaders discussed the “war in Ukraine, stressing the urgency of dialogue and peace and expressing the hope, to this end, for a world free of nuclear weapons.”

Not long after his meeting with the pope, the Japan Times newspaper reported that Russia announced sanctions against 63 Japanese officials, including Kishida, for their “unacceptable rhetoric” against Moscow.

Since beginning its attack on Ukraine in late February, Russian officials have spoken of a possible nuclear conflict if Western countries continue to supply Ukraine with weapons.

In an interview with Russian state television in April, Russian Foreign Minister Sergey Lavrov accused NATO of using the conflict in Ukraine to engage in a proxy war with Russia and said the threat of nuclear war should not be underestimated.

Most recently, Rossiya 1, a Russian news channel known for spreading state propaganda, drew outrage after it featured a simulation of a nuclear strike against Britain and Ireland, the Washington Post reported May 3.

Pope Francis gave a subtle warning of the threat posed by nuclear weapons stemming from the conflict in Ukraine during his Easter blessing “Urbi et Orbi” (“To the city and the world”) April 17.

Calling on world leaders to commit to peace, the pope quoted the 1955 manifesto written by English philosopher Bertrand Russell and German-born theoretical physicist Albert Einstein in which they warned of the dangers posed by nuclear weapons.

“May the leaders of nations hear the people’s plea for peace,” the pope said. “May they listen to that troubling question posed by scientists almost 70 years ago, ‘Shall we put an end to the human race, or shall mankind renounce war?'”

NEXT: Zelenskyy refers to Mother Teresa in address to Albanian legislators