Zelenskyy refers to Mother Teresa in address to Albanian legislators 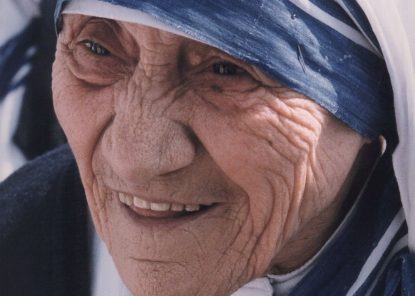 St. Teresa of Kolkata is seen in this 1995 file photo. Ukrainian President Volodymyr Zelenskyy thanked Albanians for supporting Ukraine in the war with Russia and compared their help to the actions of St. Teresa. (CNS file photo/Joanne Keane)

LVIV, Ukraine (CNS) — Ukrainian President Volodymyr Zelenskyy thanked Albanians for supporting Ukraine in the war with Russia and compared their help to the actions of St. Teresa of Kolkata.

Addressing Albania’s Parliament May 3, Zelenskyy said Mother Teresa, as the saint is known, “taught people that good daily efforts can defeat evil and bring them closer to the holiness that people will remember from generation to generation.”

“I am grateful to you for not hesitating who to support in this struggle,” he said. “You are definitely on the side of freedom and truth. Thank you for concrete steps for Ukraine. For defense assistance. For supporting sanctions on Russia. For taking care of our people and hosting our children.”

Since Russia invaded Ukraine Feb. 24, Zelenskyy has conducted virtual addresses with legislators of many countries and, each time, he ties in some part of their history or daily lives. In his address to the U.S. Congress, he recalled the Dec. 7, 1941, attack on Pearl Harbor and the 9/11 terrorist attacks.

Speaking to Canadian legislators and government leaders, he asked them to imagine what they would tell their children if cruise missiles were falling on the airport in Ottawa, Ontario. He invoked the memory of Winston Churchill with British legislators.

He also speaks about the murder of children, and he told the Albanians: “Every day Ukrainians lose children because of Russian strikes. And more than 600 children have fallen victim to this Russian invasion: 220 children were killed and 406 were injured.”

He spoke of mass graves of tortured people and bodies found in forests, fields, basements and wells. He said 86 religious sites — including churches and mosques — had been destroyed.

“This is a complete abandonment of morality. Complete rejection of universal values. Complete nonrecognition of life as an unconditional value. And they do not want to stop in Ukraine. They want to go further. In an attempt to revive the worst-level tyranny seen in the 20th century, Russia has become the greatest threat to the entire free world. And I am grateful to every nation that is fighting this tyranny with us,” he said.