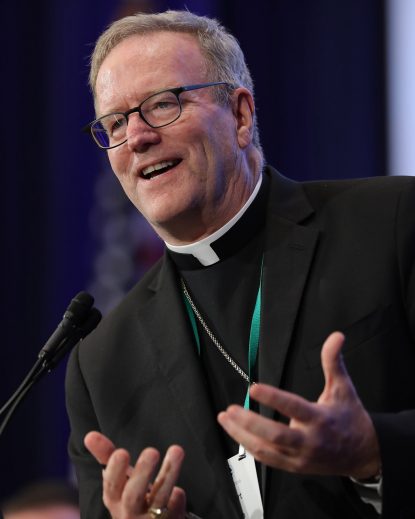 Los Angeles Auxiliary Bishop Robert E. Barron, founder of Word on Fire Catholic Ministries, speaks during the fall general assembly of the U.S. Conference of Catholic Bishops in Baltimore in this Nov. 11, 2019, file photo. Bishop Barron has been appointed by Pope Francis as the new bishop of Winona-Rochester, Minn. (CNS photo/Bob Roller)

Bishop Quinn, who has headed the Diocese of Winona-Rochester for 13 years, is 76. Canon law requires bishops to turn their resignation in to the pope when they turn 75.

Bishop Barron, 62, is a Chicago native who has been a Los Angeles auxiliary bishop since 2015. He is the episcopal vicar of the Santa Barbara pastoral region, one of the Los Angeles Archdiocese’s five pastoral regions. He also is the founder of Word on Fire Catholic Ministries.

The changes were announced in Washington June 2 by Archbishop Christophe Pierre, apostolic nuncio to the U.S.

Bishop Quinn said he was “filled with joy” that the pope has appointed Bishop Barron as his successor and the ninth bishop to head the 20-county diocese. “His commitment to evangelization and missionary discipleship will bear great fruit in the coming years,” the retiring prelate said in a statement.

The Mass of installation for Bishop Barron will be celebrated July 29.

“I am overjoyed and humbled to receive this new assignment,” Bishop Barron said. “I look forward immensely to getting to know the good people, priests and pastoral ministers of the diocese.”

“I will have to brush off my Chicago winter coat, which has remained unused for the past six years in Santa Barbara!” he added. “My fondest hope is that I might be a good spiritual father to all the Catholics of southern Minnesota.”

“The bishop of a diocese is, first and foremost, a spiritual father to the priests and people who have been entrusted to his care,” Bishop Barron said in a statement. “My prayer this morning is that the Lord will give me the grace always to be a good father.”

As Pope Francis “often teaches,” he said, a bishop is “a shepherd with the smell of the sheep — out in front of the flock in one sense, leading the way, but also with the flock, giving encouragement, and in back of the flock in order to gather in those who have fallen behind.

He also prayed “for the grace to be just that kind of shepherd” to the Catholics of the Winona-Rochester Diocese.

Los Angeles Archbishop José H. Gomez called Bishop Barron “a man of prayer, with a fine intellect and a beautiful zeal to spread the love of Jesus Christ. I am certain that he will be a great shepherd for the family of God in Winona-Rochester.”

“I am very grateful for his service here in the Santa Barbara pastoral region over these past several years,” he said in a statement. “Personally, I am going to miss him, and so will the people of Santa Barbara and all of us in the Archdiocese of Los Angeles.

“Entrusting him to the tender care of Our Lady of Guadalupe, I wish him all God’s blessings in his new appointment.”

Bishop Barron called it “an extraordinary privilege” to have served as a Los Angeles auxiliary bishop for the past seven years.

“The priests and people received me, from the beginning, with warmth and enthusiasm,” he said in his statement, adding that he had “the good fortune to observe close up” the ministry of Archbishop Gomez, whom he called “one of the great churchmen on the scene today.”

“Watching him govern the largest archdiocese in the country was a master class in ecclesial leadership,” Bishop Barron said.

He added, “It is with real sadness in my heart that I take leave of the good people of the Santa Barbara pastoral region. Together, we made our way through fire, flood, mudslides, and COVID, and I will never forget your kindness to me and never cease to draw strength from your faith.”

In Minnesota, Archbishop Bernard A. Hebda of St. Paul and Minneapolis welcomed Bishop Barron’s appointment and said he looked forward to collaborating with him “as he joins the bishops of our state in striving to provide pastoral leadership after the heart of Christ, the Good Shepherd.”

“I have long admired his ministry and am delighted that he will now be bringing his rich experience and considerable gifts as a teacher and preacher to the people of southern Minnesota, building on the firm foundation that is Bishop John Quinn’s legacy after 13 years of faithful ministry,” Archbishop Hebda said in a statement.

Robert Emmet Barron was born Nov. 19, 1959, in Chicago. He spent his childhood in Detroit and then in the Chicago suburb of Western Springs. After graduating from Benet Academy, a private Benedictine high school, in 1977, he attended the University of Notre Dame in Indiana for a year, then transferred to Mundelein Seminary in Mundelein, Illinois.

He was accepted a year later as a Basselin scholar at the School of Theology of The Catholic University of America in Washington, where he received a bachelor of philosophy degree in 1981 and a master of arts in philosophy in 1982. He earned a licentiate of sacred theology from Mundelein Seminary in 1986.

He was ordained a priest for the Chicago Archdiocese by Cardinal Joseph L. Bernardin May 24, 1986.

Then-Father Barron served as an associate pastor of St. Paul of the Cross Catholic Parish in Park Ridge, Illinois, from 1986 to 1989, when he was sent to study at the Institut Catholique de Paris.  He earned a doctorate in sacred theology there in 1992.

He was a professor of theology at Mundelein Seminary from 1992 to 2015 and also served as its president-rector from 2012 to 2015, when he was named a Los Angeles auxiliary.

“Word on Fire” programs featuring the bishop have been broadcast regularly on WGN America, EWTN, Relevant Radio and the Word on Fire YouTube Channel. His 10-part TV series “Catholicism,” an award-winning documentary about the Catholic faith, aired on PBS.

Bishop Barron said in his statement that “the important work of Word on Fire … will certainly continue” even as he moves to a new diocese.

“Through our gifted staff, we will keep bringing you regular videos, interviews, articles, sermons and daily reflections,” he explained. “We will press forward with the Word on Fire Institute, the Word on Fire Bible series, the Liturgy of the Hours initiative, our many books and YouTube shows, and more exciting things coming down the pipeline.”

He asked the faithful to pray for him as he begins “this new adventure under the Lord’s providence, and pray for the all the good people of the Winona-Rochester Diocese.”

PREVIOUS: Healing of the Eucharist is needed to repair scandal, says Iowa archbishop