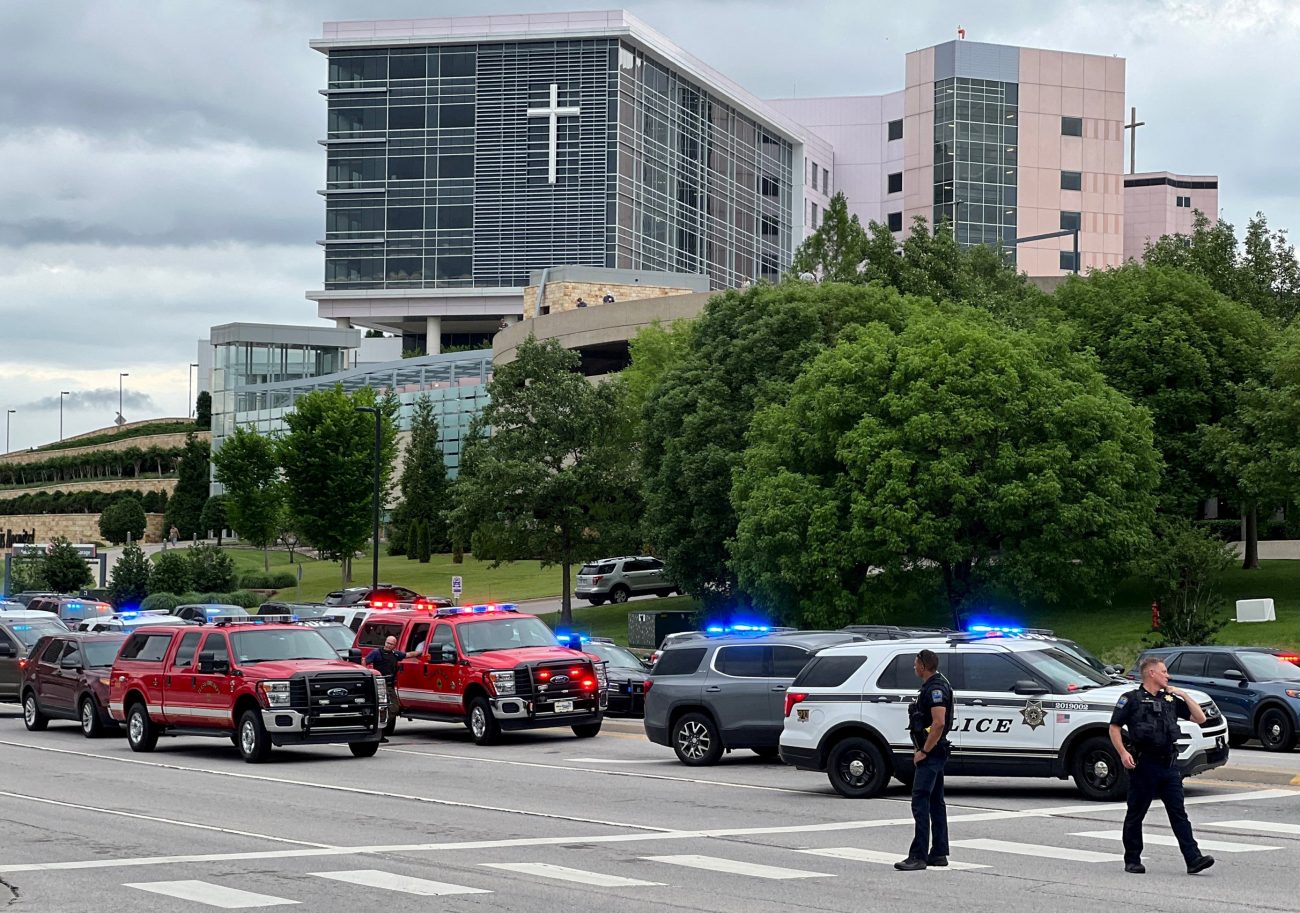 Emergency personnel in Tulsa, Okla., work at the scene of a shooting on the St. Francis Hospital campus June 1, 2022. Four people were killed on the second floor of the medical building. The gunman was later found dead. (CNS photo//Michael Noble Jr., Reuters)

WASHINGTON (CNS) — A Catholic hospital’s campus in Tulsa, Oklahoma, became the scene of the country’s 233rd mass shooting of the year June 1, leaving four dead, including a doctor, who had treated the gunman for back pain.

Tulsa authorities said in a June 2 news conference that the shooter, who committed suicide after the shooting at the St. Francis Health System’s Natalie Medical Building, entered the medical complex armed with a handgun and rifle and opened fire shortly before 5 p.m. inside an orthopedic clinic.

Chief Wendell Franklin of the Tulsa Police Department identified Michael Louis as the suspected gunman, saying that he fatally shot himself after shooting several people, including Dr. Preston Phillips, who had treated him for back pain.

“He blamed Dr. Phillips for the ongoing pain following the surgery,” Franklin said, adding that police found a letter written on the gunman stating what he was going to do and why.

Louis had gone in for surgery in mid-May, was released a few days later but kept complaining of pain. An hour before the shooting, police said, he bought an AR-15 rifle at a pawn shop and headed for the hospital in search of Phillips. In the process, he killed a patient, another doctor and a receptionist, and left several others injured before shooting himself seconds before police reached him.

The large complex where the clinic is located also includes a children’s hospital and St. Francis Health System Convent, where the Religious Sisters of Mercy of Alma, Michigan, live and work on the hospital grounds.

The Diocese of Tulsa said Bishop David A. Konderla, several priests and religious sisters offered pastoral support to those affected by the shooting.

Oklahoma City Archbishop Paul S. Coakley commended their work in tending to the “pastoral needs of those involved in this latest act of mass gun violence.”

“I ask Catholics and all people of faith to pray for the men and women killed today and for their families who now must grieve tremendous loss,” he said in a statement. “We need to speak louder in defense of all human life from conception until natural end, and find ways to stop the mass killing of innocent human beings.”

Unable to hold her tears, Dr. Ryan Parker, associate chief medical officer at the hospital who also is a practicing emergency room physician, said she witnessed efforts to save the life of the patient who was shot, William Love. Some witnesses said Love had helped others escape the violence.

“To the family of Mr. Love, I’m so sorry we couldn’t save you,” Parker said during the news conference. “When I woke this morning, I really just wanted this to all be a bad dream, but this is the reality of our world right now.”

She said it was “just incomprehensible” that caregivers were the victims. In addition to Phillips, Dr. Stephanie Husen, who practiced osteopathic medicine, also was fatally shot as well as receptionist Amanda Glenn.

“We are supposed to be the ones that are caring for others during tragedies like this,” Parker said. “They died while serving others. They died in the line of duty.”

Dr. Cliff Robertson, the hospital’s president and CEO, said during the news conference that he walked through the clinic the morning after the shooting and prayed over the areas where people had died, “including the perpetrator.”

He said he sent a letter to the staff, knowing the event would change the hospital.

“It is up to us to not allow this horrible event, this situation, we cannot allow that to make us turn our back on the reason that we’re here. We were all called into this profession to care for others,” he said. “And while it’s human nature to want to turn our backs and walk away, we cannot do that and we won’t do that.”

The incident renewed calls for regulating the public’s purchase of weapons with a high capacity for killing human beings. The U.S. Conference of Catholic Bishops has continually asked for such gun control.

The 2022 figure on mass shootings in the U.S. was tabulated by the Gun Violence Archive. The Washington-based nonprofit defines a mass shooting as an incident in which four or more people are shot or killed, excluding the attacker.

“Whatever faith you subscribe to, and even if you don’t subscribe to a faith, I will tell you that a prayer is just a solemn request for help and I think we can all agree that our world needs a little bit of help right now,” she said. 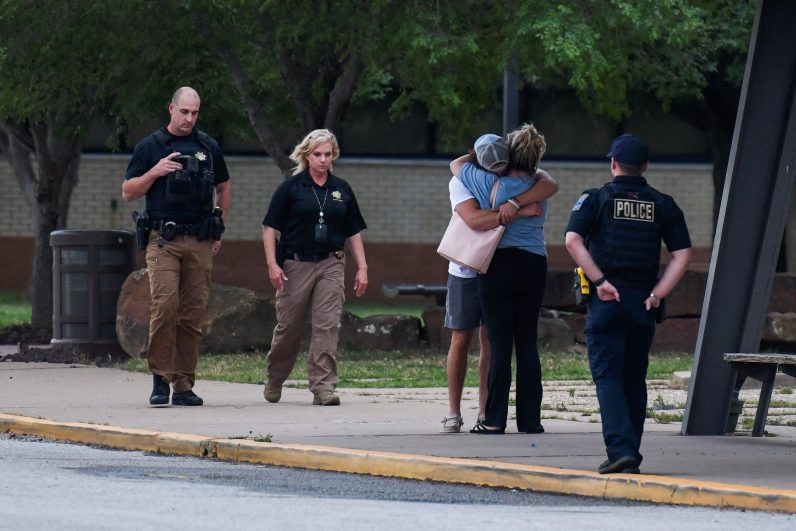 People in Tulsa, Okla., embrace at Memorial High School, which became a reunion location for those evacuated from a medical building on the St. Francis Hospital campus June 1, 2022, after a mass shooting. Four people were killed on the second floor of the medical building. The gunman was later found dead. (CNS photo/Michael Noble Jr., Reuters)