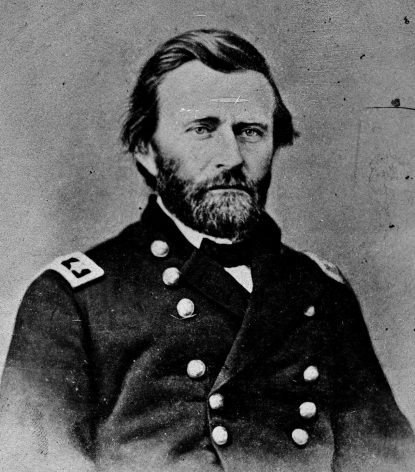 Gen. Ulysses S. Grant is seen in this U.S. National Archives photo. As president of the United States (1869-1877), Grant wanted no tax money to go to the support of “atheistic, pagan or sectarian teaching” — that is, Catholic schools. (CNS photo/U.S. National Archives, Local Identifier: 111-B-2481)

Such amendments prohibited public funds being used to support private religious schools. Understanding the legacy of these amendments is to explore a historic and long-lasting vestige of American anti-Catholicism.

The original Blaine Amendment was named after House Speaker James Blaine, who introduced the proposal in the House of Representatives in 1875. Blaine’s proposed amendment was intended to prohibit the use of public money for sectarian schools.

Justice Samuel A. Alito, writing in 2020 in the Espinoza v. Montana Department of Revenue decision, said that “the amendment was prompted by virulent prejudice against immigrants, particularly Catholic immigrants.”

The amendment was passed by the House but fell just short of the two-thirds approval in the U.S. Senate needed to send it to the states for ratification. This was not the end of the story, as more than 30 states adopted Blaine amendments of their own in the following decades.

The amendment grew out of an increasingly divisive standoff between advocates of public education with a heavily Protestant-dominated curriculum — including the mandatory reading of the King James Bible — and a growing Catholic population that was distrusted as un-American.

Catholics did not want their children to submit to a Protestant curriculum, while their opponents, such as President Ulysses S. Grant, wanted no tax money to go to the support of “atheistic, pagan or sectarian teaching” — that is, Catholic schools.

Like the amendment offered by Blaine in 1875, the state amendments targeted Catholic schools, which were seen as rivals to publicly supported “common schools.” Anti-Catholic educators, like Horace Mann, thought that the goal of schools was to “‘Americanize’ the incoming Catholic immigrants,” Alito wrote.

Alito quoted Mann as saying that the common-school movement was “laboring to elevate mankind into the upper and purer regions of civilization, Christianity, and the worship of the true God; all those who are obstructing the progress of this cause are impelling the race backwards into barbarism and idolatry.”

But Alito said that “Catholic and Jewish schools sprang up because the common schools were not neutral on matters of religion.” Rather, they were “culturally Protestant and with curriculum(s) and textbooks that were, consequently, rife with material that Catholics and Jews found offensive.” 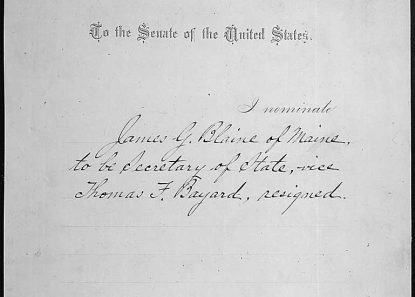 This March 5, 1889, letter from President Benjamin Harrison nominates James G. Blaine to be secretary of state. When he was in Congress, then-Rep. Blaine introduced a proposed amendment to the Constitution in 1875 to prohibit the use of public money for sectarian schools. It passed in the House but failed to get the two-thirds approval in the U.S. Senate needed to send it to the states for ratification. Several states, however, adopted Blaine amendments. (CNS photo/U.S. National Archives, Collection: 46)

The Supreme Court by a 6-3 vote said that if Maine was willing to fund private education, “it cannot disqualify some private schools solely because they are religious.”

And although Catholics have argued against the Blaine amendments for decades, the Maine suit was pressed not by Catholics, but by a Protestant family who wanted to send their children to a private religious school of their choosing.

The Maine decision does not necessarily mean that any discrimination against religious schools is unconstitutional, according to Joshua Dunn, director of the Center for the Study of Government and the Individual at the University of Colorado. Chief Justice John Roberts has emphasized “that a state does not have to subsidize private education — but that once it does it must do so on a religiously neutral basis,” Dunn said.

Dunn argues that the next battleground in what he called the “slow-motion execution of Blaine amendments” may be charter schools run by religious organizations.

PREVIOUS: After Roe’s reversal, a call to ‘redouble’ efforts to help women

NEXT: Pray for migrants who died in truck, archbishop says